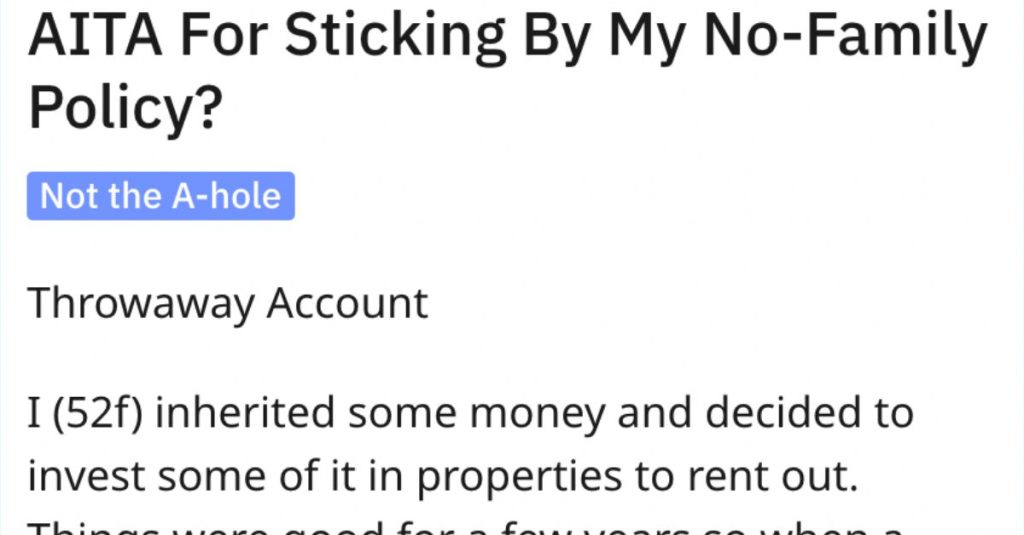 Is This Landlord Wrong for Refusing to Rent to Family?

Most people are aware of, and even abide by, an unspoken rule that you don’t lend money to friends or family if you can’t afford to lose it altogether with no hard feelings. The point being that money can come between people who care about each other, so those situations are to be avoided to all costs.

This landlord was guilted into revising this policy for a cousin and his family who were down on their luck, and well…the way things went didn’t surprise him.

Before long, they were asking for favors.

I (52f) inherited some money and decided to invest some of it in properties to rent out. Things were good for a few years so when a cousin of mine approached me about renting in one of my apartments I agreed but only under the condition that they pay the same amount of rent as everyone else. My cousin agreed and the first year everything was good until they “hit hard times” and were begging for leniency.

He showed leniency because they were family and having a hard time, even though the troubles went on seemingly forever.

They were family and had kids so I decided to work with them a little as I was told that this was only temporarily. They still paid me something regularly but only paid the market value once every three months because again “times were hard” and any time I tried to speak to them about it they would give me some sob story and I would get pressure from other members of the family because they accidentally found out.

After two years, he learned that they hadn’t been struggling since about six months from the start, and had been bragging about taking advantage of their cousin/landlord on the sly.

He filed an eviction.

For two more years I put up with this crap until i found out that not only did my cousin bounce back about six months from when they first time to but they were doing better than ever and bragged about how they could get away with paying less rent. How did I find out? The wife posted pictures of a trip on social media because she loves to brag.

When I confronted them they tried to say that the trip was paid for by someone one else but when the refused to provide proof I hit them with an eviction.

The process was long and drawn out, and OP renewed his vow to never rent to family, though he did offer to refer them to other landlords and properties he respected.

As predicted they sent the flying monkeys after me but drew out the eviction process as long as possible. In the end I managed to get them out but not after they did some damage on the way out. I’m still angry and refuse to talk to my cousin or his wife to this very day.

After that I made a “No-Family” Policy and made it known to relatives that while I would recommend them other places to rent they could never rent with me.

He stuck by his guns recently when another cousin, from the other side of the family, asked whether she could rent from him.

She dropped it after a simple ‘no,’ but other family members are giving him a hard time for punishing everyone for one cousin’s mistakes.

Everyone eventually seem to get it, or at the very least stop pestering me about it until I was approached by another cousin (other side of the family) and asked if she could rent from me. I told a gentle but firm “No” and explained my reasonings.

She seemed disappointed but didn’t bring it up however I did get an ear full from her mother who told me that it wasn’t even their side of the family that screwed me over so they shouldn’t be punished.

Is he wrong for drawing a line in the sand? Isn’t it better for them to be a little upset now instead of the situation causing a permanent rift down the road?

Reddit’s weighing in below!

The top comment says no, because the initial reaction just proves they feel entitled. 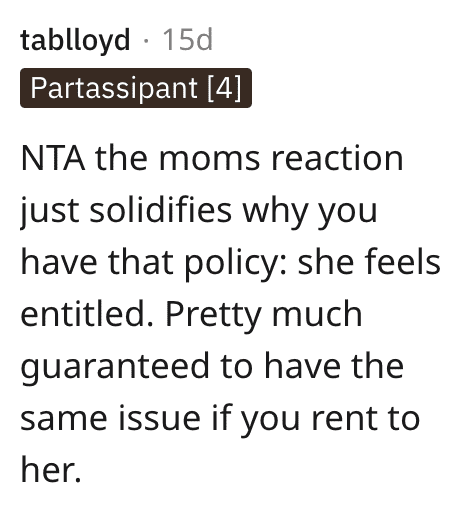 You can be firm without being a jerk.

His gut instinct was correct. 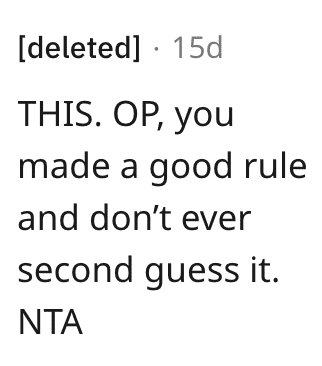 Fool me once, and all of that. 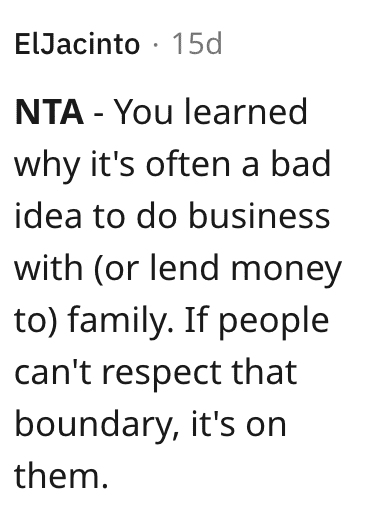 He’ll just have to stick by his guns.

I do agree that it’s better to cause a bit of friction now instead of having a repeat of the first scenario.

Do you think OP is right, or being too harsh? Drop your thoughts down in the comments!