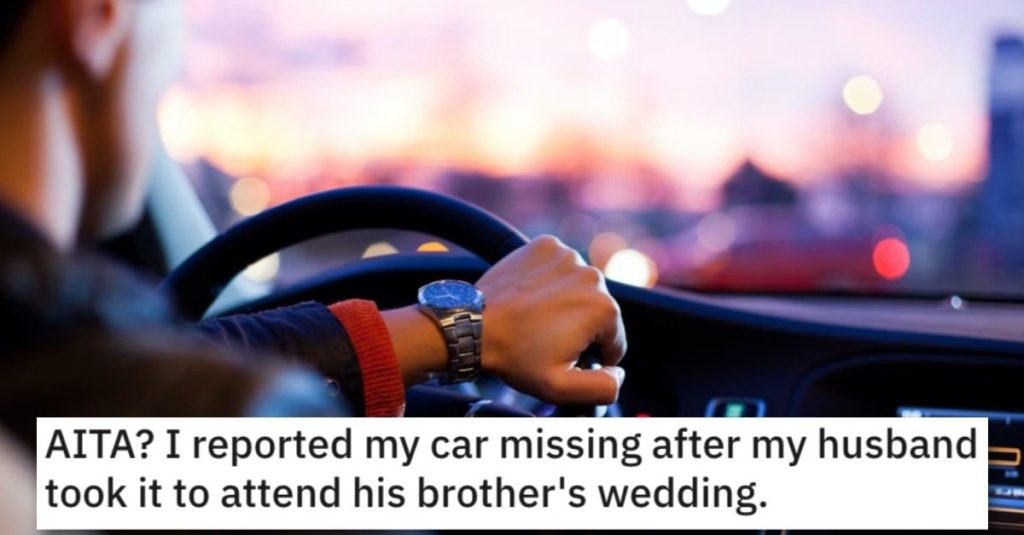 Is This Woman Wrong for Reporting Her Car Stolen After Her Husband Took It? People Responded.

Have you ever reported your car stolen?

Let’s take that a step further: have you ever reported your car stolen after your significant other took it for a spin?

Read on to see what happened in this story from the “Am I the A**hole?” page on Reddit.

AITA? I reported my car missing after my husband took it to attend his brother’s wedding.

“My husband (35) does not have a car. He sold his old one to help pay for his brother’s wedding.

I did not agree on this but he had this car before we got together so it’s a shared property. besides that I have my own car so that did not affect me til my husband started complaining about having to commute to work and hangout places.

He tried to get me to let him drive my car several times but I stood firm and put a boundary making him understand that my car will never be driven by him (one of the reasons why is because of how bad his driving is).

His brother lives out of town. My husband asked if he could drive my car to the wedding but I refused but not because I’m not invited (another story for another day) buy because like I said my car is off limits. He threw a fit calling me unreasonable to let him take public transportation because he can barely stand it for 10 minutes let alone hours. I said it wasn’t my problem which irritated him but made him stop arguing about it.

I lost it and told him I gave him no permission to take it for whole 5 days and said that if he won’t turn around with it and come home then I’d call the cops and report it missing. His response was “You wouldn’t dare do it cause you know what would happen” I hung up on him then immediately called the police and told them about my situation.

I did NOT tell them my husband took it because they’d think it’s a family dispute and decide to not get involved. I just reported it missing.

2 hours later I got a call from my husband saying he was back in town and was being held at our local police station. I went to the station and talked to the cops. My husband made a scene there swearing over and over that I gave him permission to take it and said I was acting out of jealousy and spite because he was going to attent a wedding that I was not invited to. I took my car and went home but he had to stay a little longer.

He came home in the evening and went on a rage fit about how I created an awful situation and almost caused him to miss his brother’s wedding. He called me vindictive, bitter and a lunatic to call the police on him and try to accuse him of stealing my car. He had to leave the same day to be able to be there with his family and decided to extent his stay and he still hasn’t gotten back yet.

Right now his mom and brother are blasting me for what happened and calling me spiteful.” 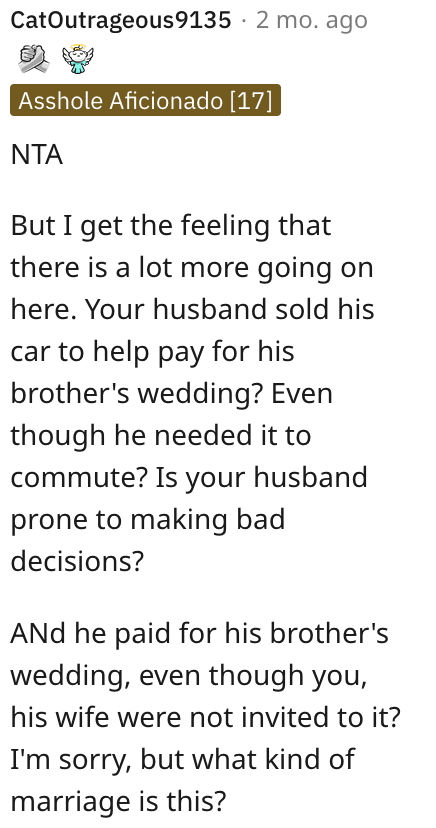 And this Reddit user said this situation is just BONKERS. 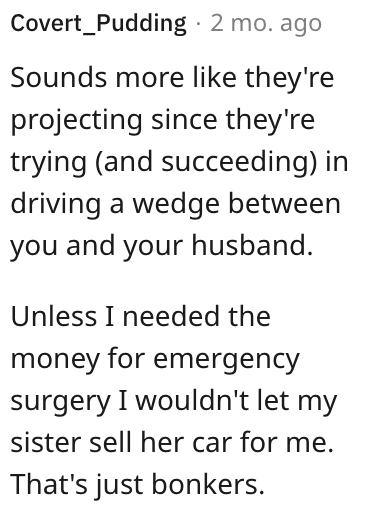 Another individual said this woman needs to start making a plan because it doesn’t sound like this marriage is going to last very long.