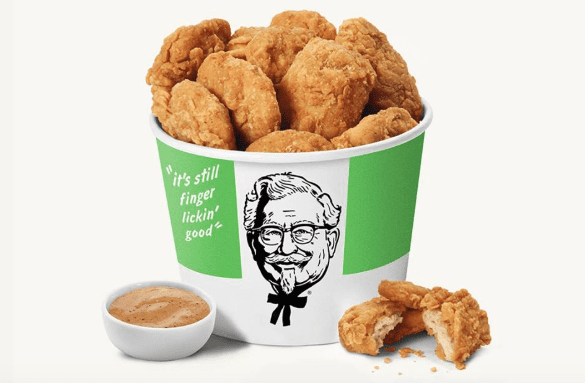 KFC’s New Vegan “Beyond Fried Chicken” Is a Big Hit

“A Kentucky Fried Miracle” is right. If you need any more proof about how popular veganism is these days, look no further than that old standby, KFC.

The fast food chain tested a new vegan chicken in Atlanta on August 27, and to the astonishment of literally everyone, they sold out in only five hours.

It’s Kentucky Fried Chicken but it’s made with @BeyondMeat. It’s confusing, but it’s also delicious. Feast on these Kentucky Fried miracles tomorrow while they last at KFC in Atlanta, Georgia. pic.twitter.com/lC5oYM1cmk

The new vegan chicken is made in collaboration with Beyond Meat, the fake-meat superpower that is gaining popularity by the day. The vegan product was offered as a nugget with dipping sauce and as a boneless wing covered in sauce.

Because the experiment went so well, it’ll be interesting to see what’s next for KFC in the vegan department. Will they forge ahead with permanent vegan items on the menu, or was this just a tease? You’d have to hope that the company will take note of what a big hit this was. I mean, the lines were out the door, apparently.

We’re at KFC in Atlanta, GA where they are testing @beyondmeat! ? The lines are out the door, and the verdict is that the vegan fried chicken is worth the hype! ? Thank you @kfc for showing that the future of fast food is plant-based ?

A nutritionist who attended the Atlanta extravaganza said, “These taste more like fried chicken than any of the other options that I’ve tried, so I really hope that they make these available nationwide and very soon.”

It’s been a big year for fast food vegan options. Burger King launched the Impossible Whopper, and other places like Carl’s Jr., my beloved White Castle, and Dunkin’ Donuts offered up vegan fare as well. Is the tide turning in the fast food world? We shall see…

One note: the KFC vegan products are 100% plant-based but they do share a fryer with meat products, so keep that in mind, okay?