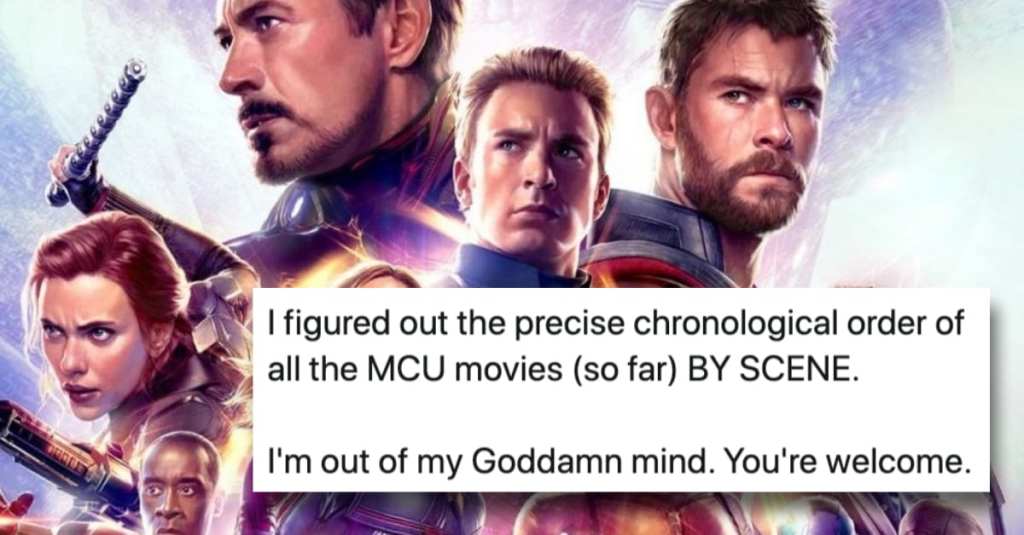 When most of us get bored, we might pick up a book or turn on the TV. Maybe we stand in front of the refrigerator, door open, while we try to decide if we’re actually hungry or not.

Tony Goldmark decided to turn his boredom into an epic project: Listing every single Marvel scene in chronological order. Even he points out how crazy this endeavor was, but he did it anyway.

Well nerds, I fuckin' did it.

Took me a global pandemic and a damn quarantine, but I did it.

I figured out the precise chronological order of all the MCU movies (so far) BY SCENE.

I'm out of my Goddamn mind. You're welcome. pic.twitter.com/3VXjqk4kjQ

He explained the criteria for his list, and it makes A LOT of sense.

Now, a few caveats. Obviously, this only covers the 23 MCU movies so far. No ABC or Netflix TV shows, no shorts, no deleted scenes.

I only counted flashbacks when they could be easily isolated from their respective film's "present." pic.twitter.com/p1DBfdDXXU

And you can bet the farm on Goldmark’s accuracy… because who’s going to actually check this?

And admittedly a LOT of this is just my own personal headcanon conjecture, but I've double- and triple-checked my work here and to my knowledge, none of this is contradictory.

Enjoy, people as insane as me!

As you might imagine, people were floored by Goldmark’s timeline.

And they had a lot of questions.

Like what about all that time travel in “Endgame?”

My rule was, I could only back up the Endgame time travel scenes into their proper "time" in non-redundant instances where a full scene, with a proper beginning, middle and end, was completely unaffected by the future Avengers' time-heist shenanigans. https://t.co/mou44rjuFq

If you haven’t watched all of the Marvel movies yet, Goldmark recommends you simply watch them, in the order they were created in. Because he did. And he checked it all. And it’s accurate, or so he says. There’s no way for us to check it and we are NOT going to watch all those films. Sorry, not sorry.

But if you’re a superfan, go ahead and give his version a try, just for fun… or if you hate yourself. Either way works!

And it probably goes without saying, but this chronological list is for SUPERFANS ONLY. If there's any films in the MCU you haven't seen yet, I strongly advocate ignoring my list altogether and deferring to how the filmmakers wanted them seen.

Well, there you have it, folks. The epitome of boredom is creating a detailed and, frankly, pretty unnecessary list of all the Marvel scenes in chronological order.

What’s your favorite Marvel character? Have you seen all the movies?

Let us know in the comments! We’d love to hear from you!