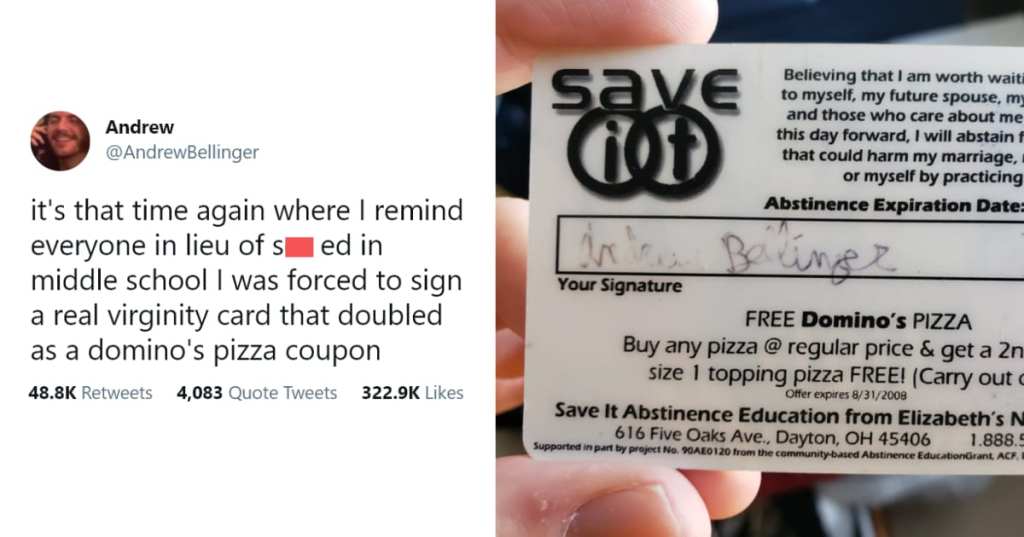 “My V-Card Was a Pizza Coupon” – A Uniquely American Tale

Teaching sex education can be uncomfortable for both students and educators, but it’s an extremely valuable way to help young people make the right choices.

Of course, not all sex ed is created equal – especially in the United States.

Andrew Bellinger is a brave soul who tweeted about the laughable time when he signed a “virginity card” that was also redeemable for pizza. His thread went viral, sparking discussion and a whole lot of jokes.

it's that time again where I remind everyone in lieu of sex ed in middle school I was forced to sign a real virginity card that doubled as a domino's pizza coupon pic.twitter.com/GOBQfe2l2y

This was a small document Bellinger signed in 2008. Notice that the coupon asks teens to make a pretty big commitment in exchange for some pizza.

Andrew then explained a bit more about the circumstances behind this pizza virginity coupon and some additional “educational” strategies he was exposed to a bit later.

It's worth noting that
1) I went to a public school
2) we did this again in hs (sans coupon😢) but weren't required to sign – I believe partly because there was a girl in my class who had just given birth pic.twitter.com/S3qMLUeFo9

Bellinger also tweeted some excerpts of the textbook used in class.

Fuck this book
(not literally I still want that pizza) pic.twitter.com/uovxCpDemf

Bellinger received a lot of sarcastic responses because duh. Could you imagine being obligated to discuss your sex life (or lack thereof) with a stranger in order to redeem a coupon?

Imagine going to domino's and just announcing to the cashier that you're a virgin. Also wtf why does the coupon expire before the card does 😭

Some people shared their own stories about sex ed at school.

I had to sign a no-sex-until-marriage contract that my folks had to co-sign…at a public school. Oh, and the baby-think-it-over. Yeah, a number of my classmates ended up pregnant…

Still, most people had a sense of humor about the matter.

Is this a literal V card

But the coupon was only good for 3 months. 🤨

Someone managed to sneak in a Clueless reference.

And it's take out only?

One person reminded Bellinger that it could always be worse.

While dumb, I think I find it preferential to my experience in 10th grade in which they spent (what felt like) an hour showing us photos of diseased genitals in an effort to make us terrified of having sex

Sex education helps people make better choices by giving them the knowledge to take care of their bodies – there is a lot of research that shows that quality sex ed is a very valuable tool for teens. Yes, laughing at these pizza coupons is easy, but the fact that it also doesn’t seem so far fetched means we need continued dialog on the matter.

Do you have anything you’d like to share about how sex education is conducted in the US or your home country? Sound off in the comments if you’d like to discuss.