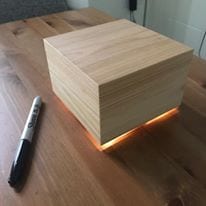 Life for Mark Zuckerberg hasn’t exactly been easy lately. Facebook has been plagued by a number of very public scandals in recent years, most notably regarding privacy concerns and just how susceptible the social network giant was to fake news and the like.

At home, things are certainly a little happier, as he enjoys playing the role of husband and father of two: 3-year-old Maxima and 1-year-old August. That said, even his home life has apparently had some ups and downs, but nothing Mark couldn’t handle with a little technological know-how.

He recently shared a “sleep box” he invented to help his wife, Priscilla Chan, sleep through the night without worrying about the time. The wooden box sits on her bedside table and emits a gentle light from 6-7 a.m. which lets her know it’s time to get up.

Being a mom is hard, and since we’ve had kids Priscilla has had a hard time sleeping through the night.

She’ll wake up and check the time on her phone to see if the kids might wake up soon, but then knowing the time stresses her out and she can’t fall back asleep.

So I worked on building her what I call the “sleep box”.

Thanks to the box, Mark reports that Priscilla has had a much easier time sleeping through the night.

This way, if she wakes up at an odd hour of the night, all she needs to do is see that the light is still off, and she can just go back to bed without worrying about what time it is.

While Mark was simply trying to do something nice for his wife, a lot of people have expressed interest in having a device like this. He concluded his post by saying:

As an engineer, building a device to help my partner sleep better is one of the best ways I can think of to express my love and gratitude.

A bunch of my friends have told me they’d want something like this, so I’m putting this out there in case another entrepreneur wants to run with this and build sleep boxes for more people!

And wouldn’t you know it… someone created the Zucklight! Or, well, zLight.

Would you buy this if it were still available? I think I would.