Coral reef die-offs have been a problem for years now, and scientists have struggled to figure out ways to revive struggling reef ecosystems. But a recent study published in the journal Nature Communications has given scientists (and everyone, really) newfound hope about this critically important issue.

The study found that playing sounds on underwater speakers could entice fish to come to dying reefs. The sounds being played on these speakers aren’t pop music, to be clear. Rather, they mimic the sounds of a healthy reef. Researchers found that when a loudspeaker played the sounds of a healthy reef, double the number of fish came by, and 50% more fish species visited compared to dead coral reef areas without any artificial sounds.

Broadcasting healthy coral reef sounds enticed doubled the total number of fish to a dying reef and increased the number of fish species by 50%. https://t.co/80i5fXFOUA

The experiment lasted 40 days, and the species of fish that flocked to the coral with the loudspeakers were very diverse. This is valuable because fish clean reefs of choking algae and help make space for new coral to grow. While this certainly isn’t the only ingredient in reviving dying coral reefs, it definitely can help reefs begin to recover. And diverse fish species bring different functions to coral reefs, which further helps recovery.

Andy Radford, a co-author of the study, said, “If combined with habitat restoration and other conservation measures, rebuilding fish communities in this manner might accelerate ecosystem recovery.” 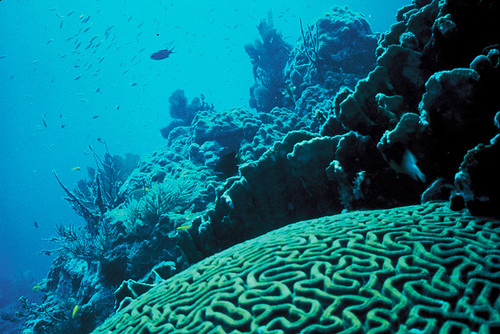 There are many factors that cause a cause reef to suffer or die. In the Florida Keys, sewage and fertilizer runoff has led to nitrogen enrichment in areas with coral reefs, killing corals. Rising ocean temperatures kill coral as well – around 50% of Australia’s famous Great Barrier Reef has been bleached to death because of high oceanic temperature caused by climate change. Though, on a positive note, it looks like some corals are becoming more resistant to increasing temperatures in the water.

Let’s hope that research and ACTION continues to develop for this very important cause. We only have one Earth, let’s take care of it!