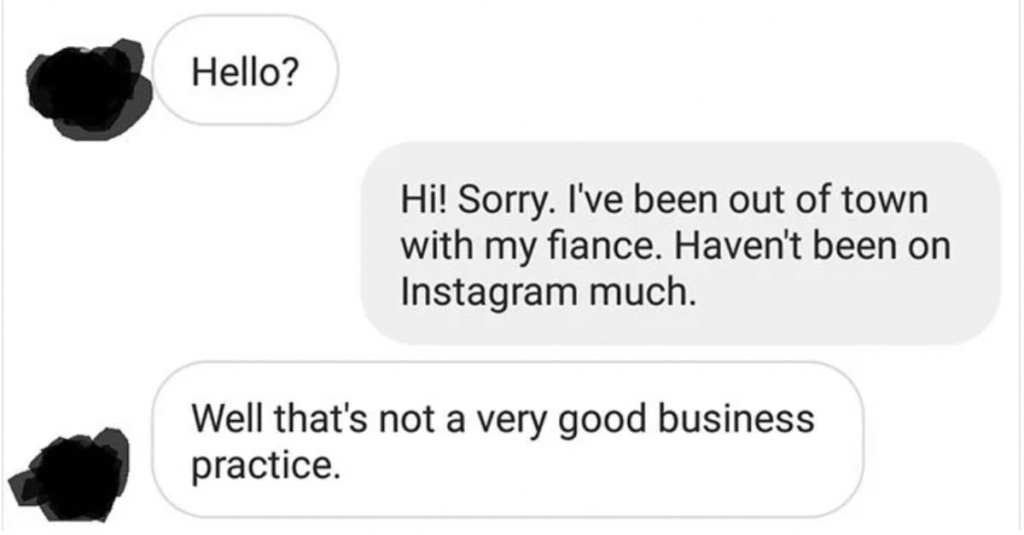 I love working in a creative field, but one thing that stinks about it is that too many people think media should be free because “everyone deserves music/a book/television etc.” It’s the mindset that allows people who would never steal a physical item from a store to sign up to illegally download movies or books, or to stream music from a site that doesn’t pay their musicians.

This mindset is also overflowing into people who make items at home and sell them on the internet – like they’re not doing it for income, somehow, and if they love it they should just be willing to give their crochet/cross stitch, flipped furniture et al away to someone who “needs it.”

This woman is a hero, even though she shouldn’t have to be, because she stood up for herself and every other creator who has been hassled with one story or another that’s nothing but an attempt to rob them of their livelihood.

The exchange started out poorly, with the potential customer lecturing OP on her questionable business practices, and I think we can all tell it’s not going to get better from here. 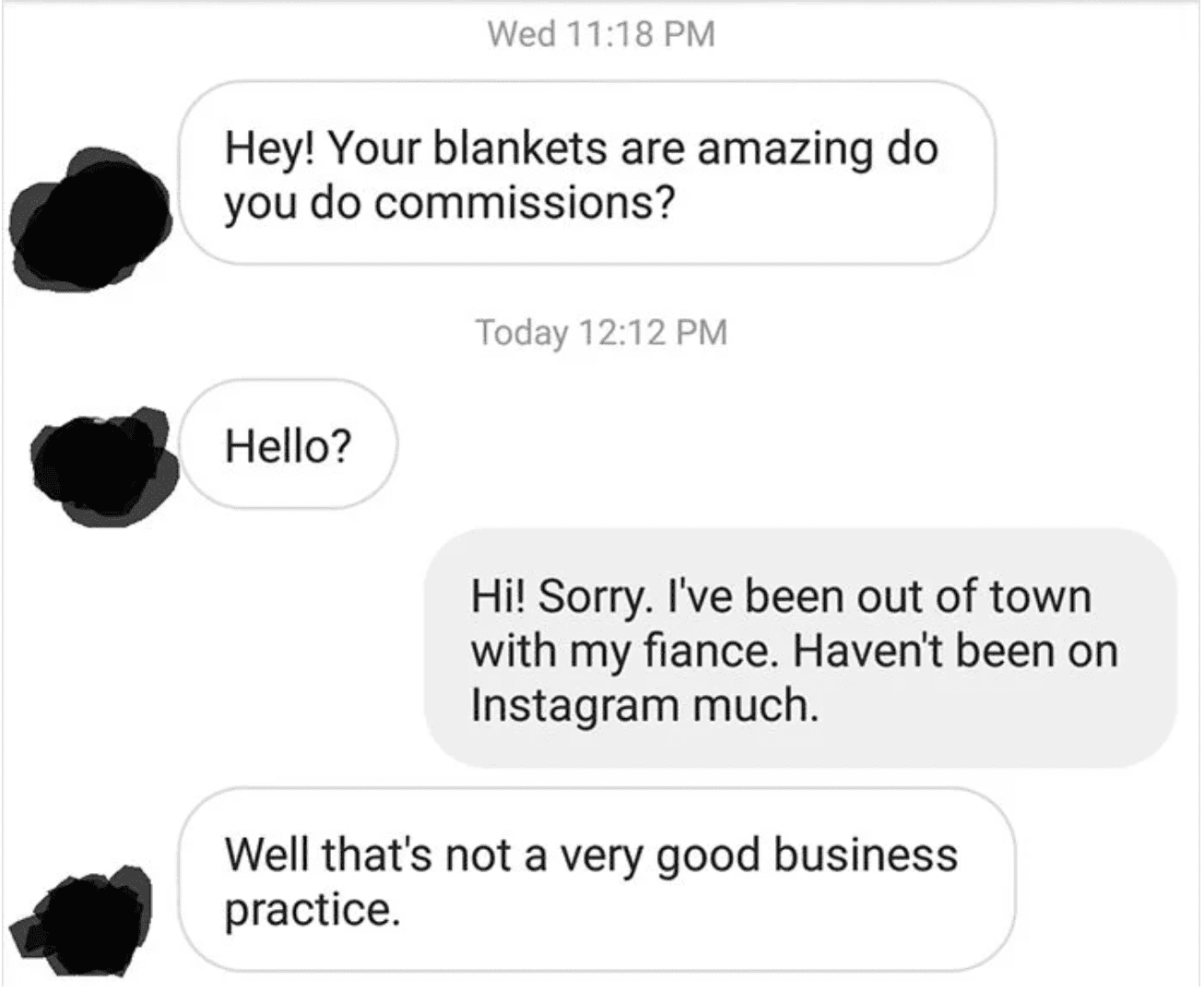 She went on to ask for something specific and complicated in a very condescending tone. 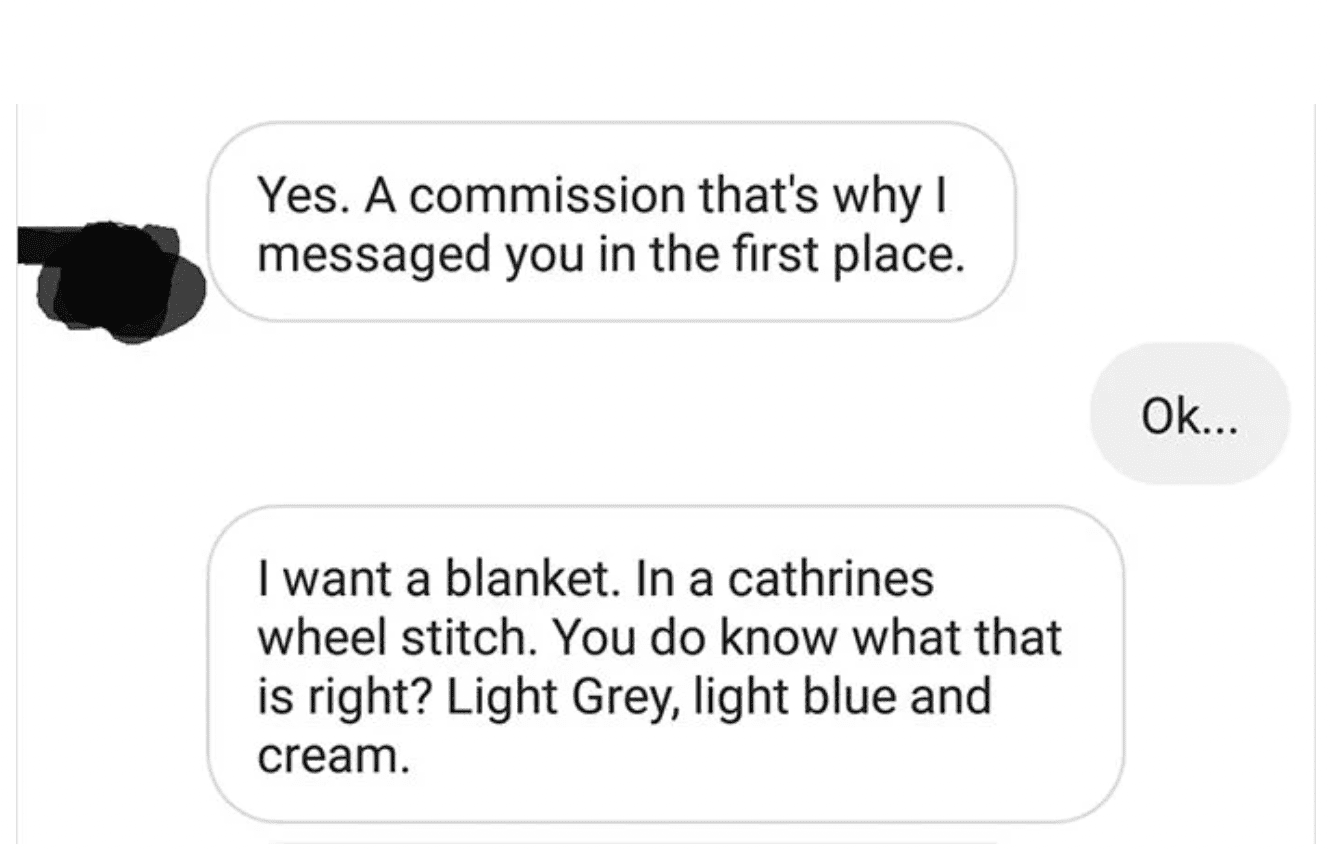 The person keeps on going with the requests, which I think we can all imagine are starting to add up. 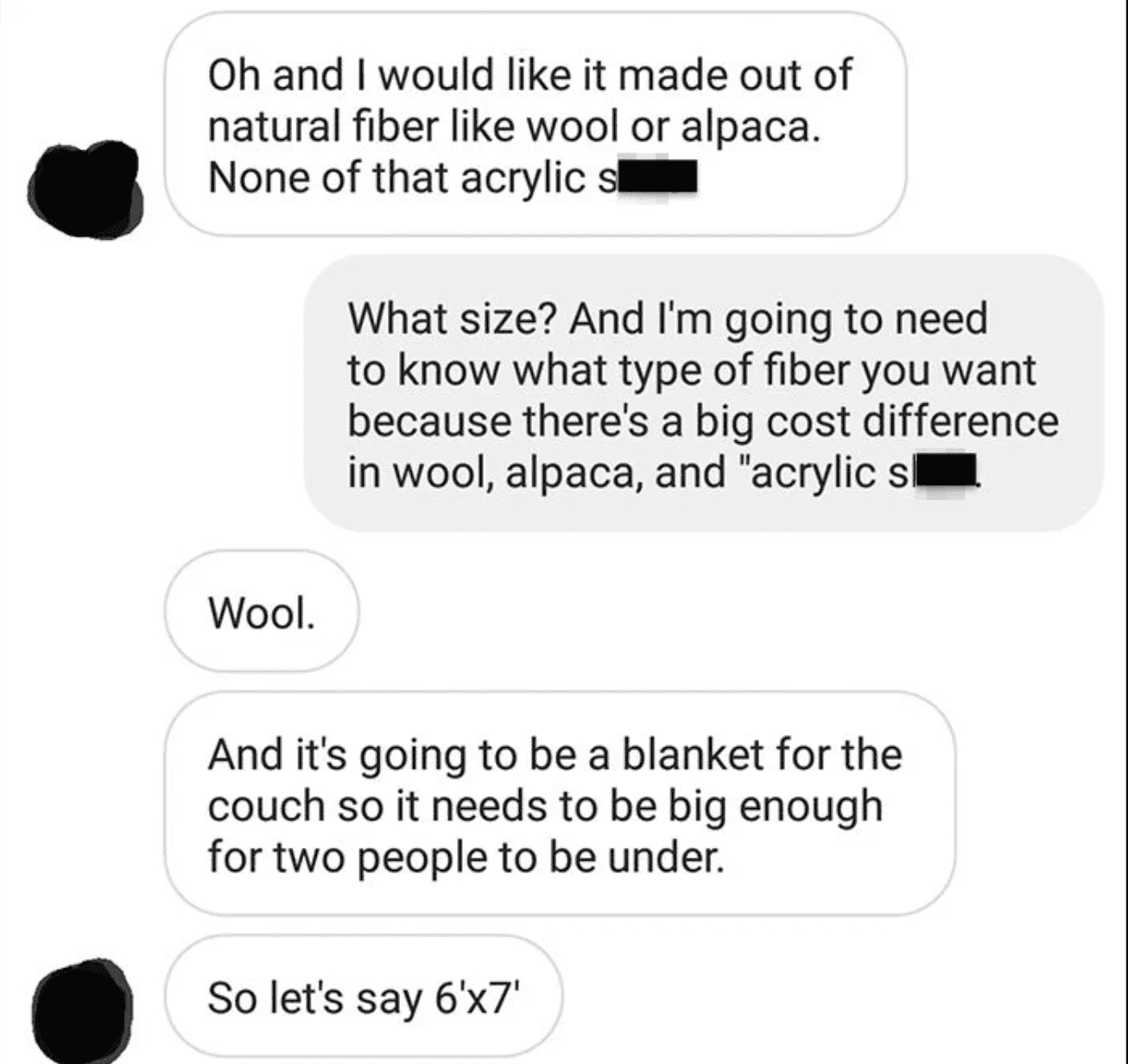 Our OP is obviously trying to keep an open mind, gathering information and promising to get back to the random demanding person with a price. 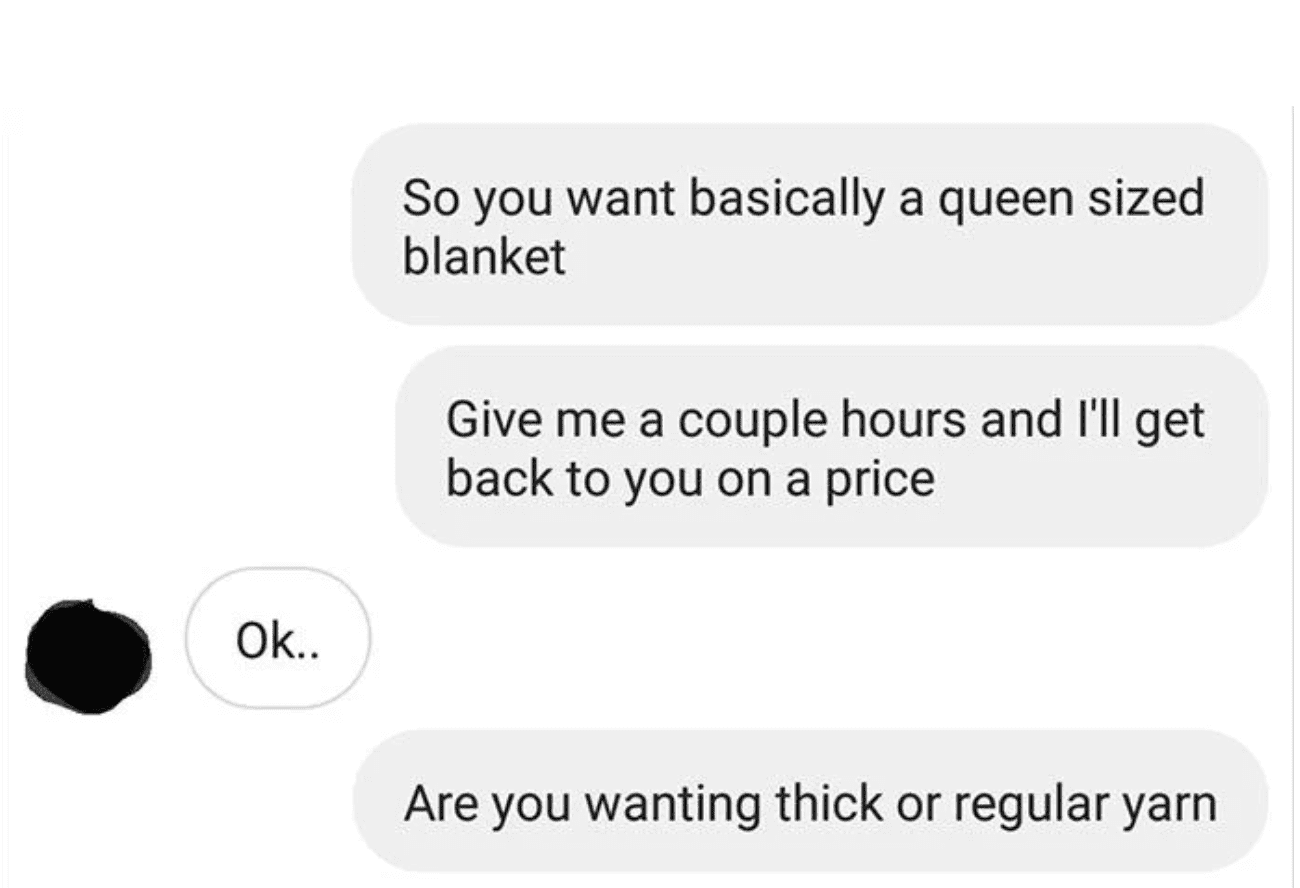 When she quotes a price, he or she very predictably freaks out. 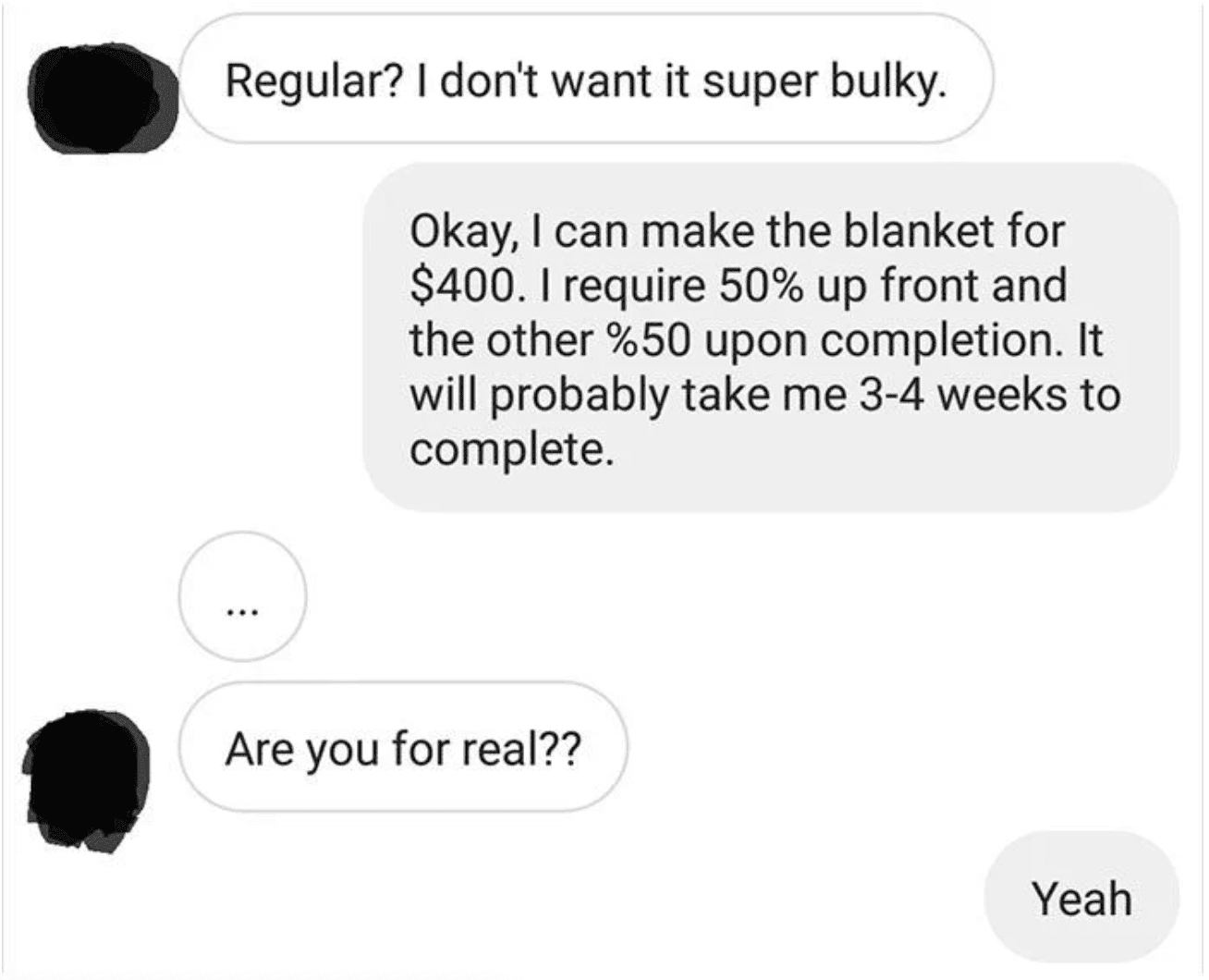 He informs her that’s a lot more than a blanket would cost at Walmart (duh) and wants to know how she’s come up with her “ridiculous” pricing. 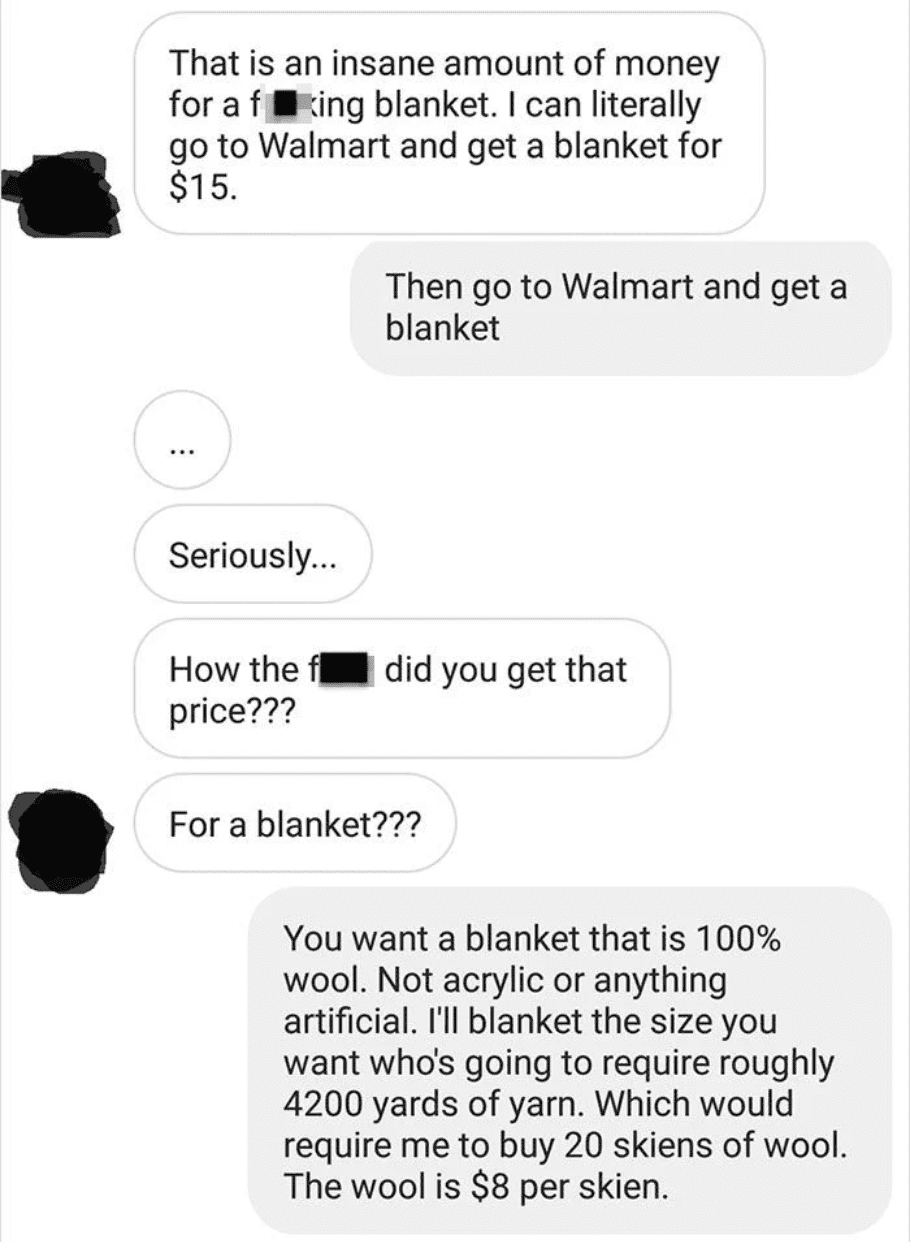 What the person really balks at, though, is paying her for her time. Which is valuable. 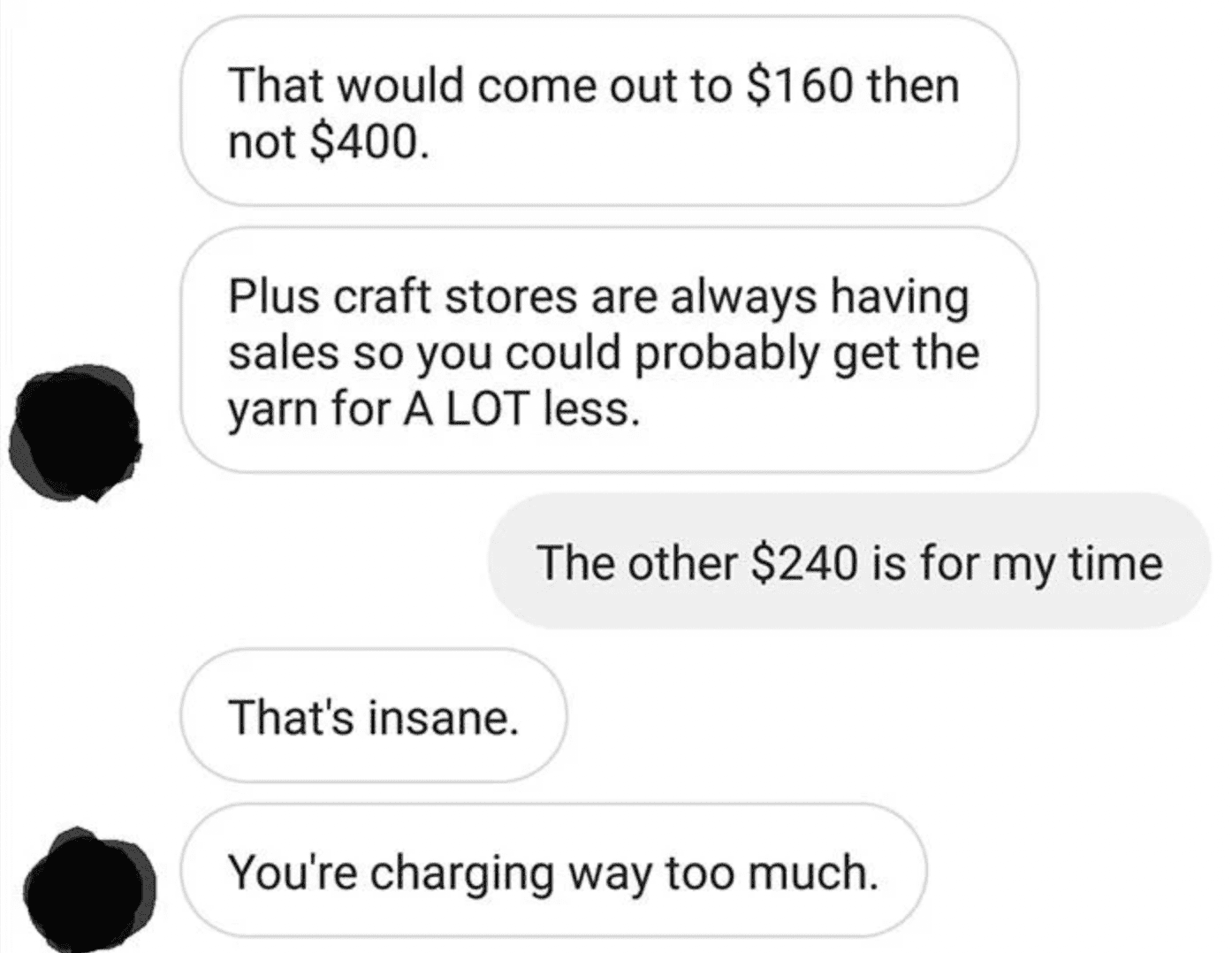 She explains that what she’s charging will only pay per around $2 an hour when everything is said and done, but even that doesn’t get through their thick head. 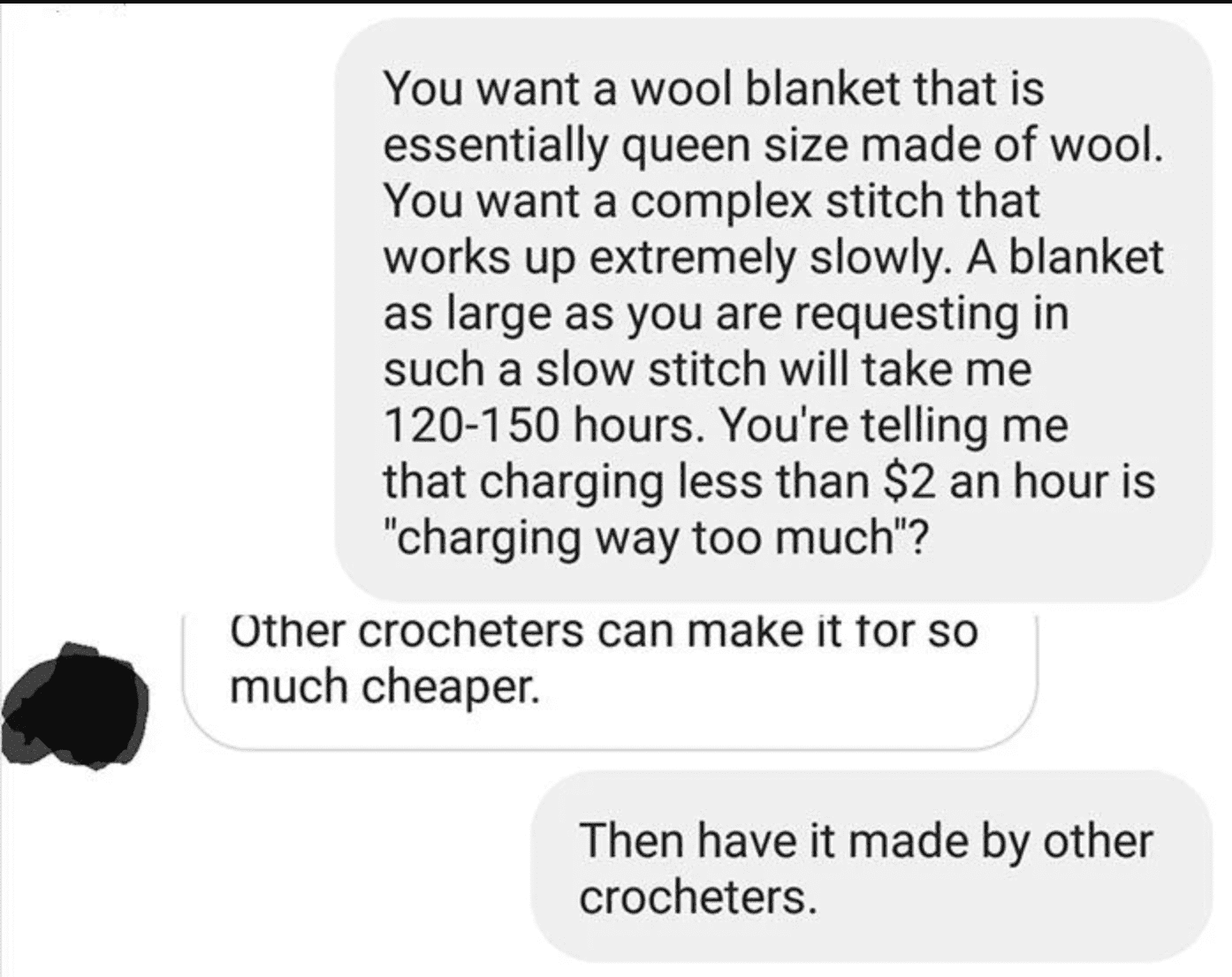 OP is clearly “insane” for valuing her time (and not falling for the first sob story the customer could dream up in an attempt to swindle her). 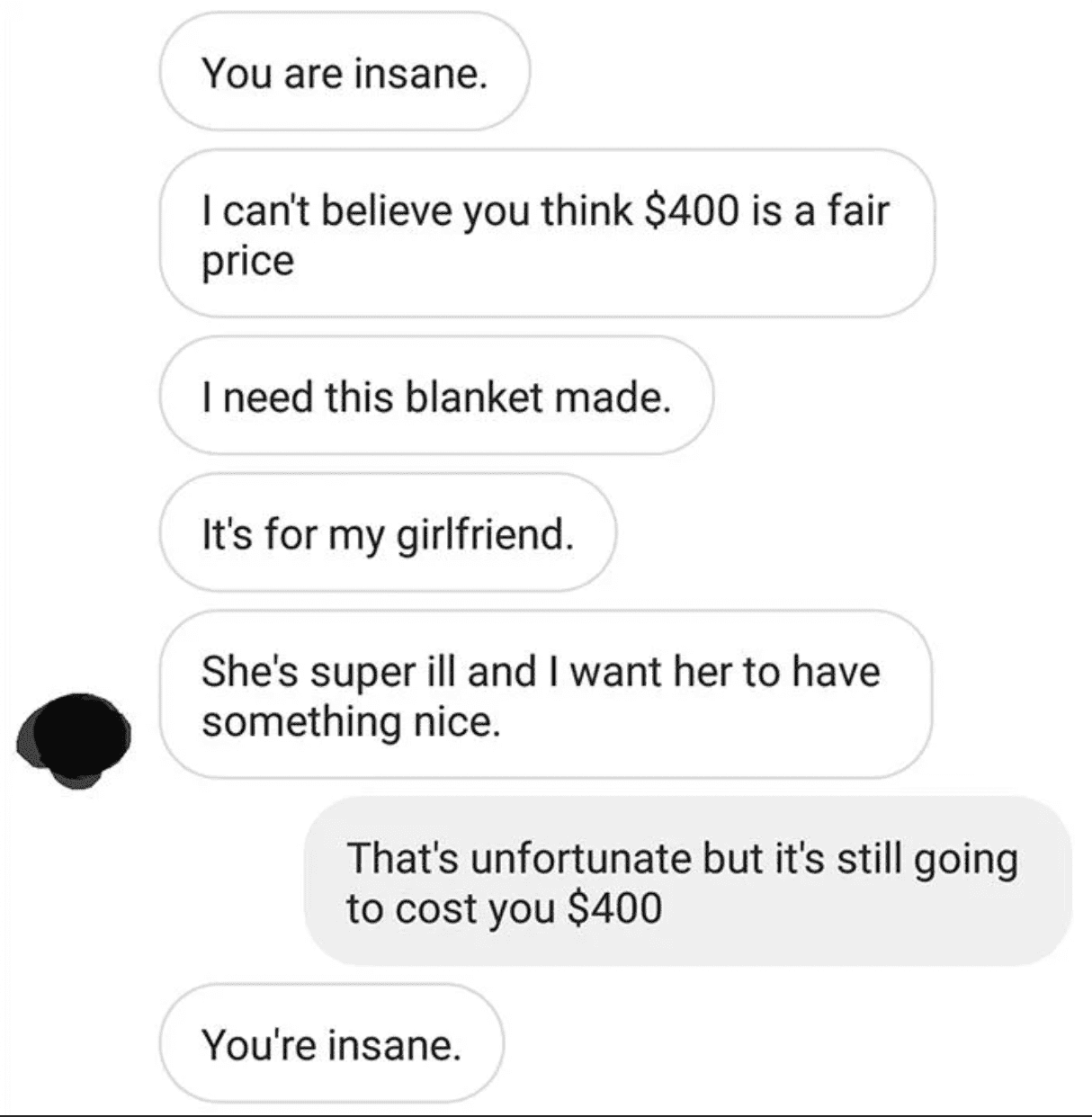 This person has so much nerve it’s almost funny. 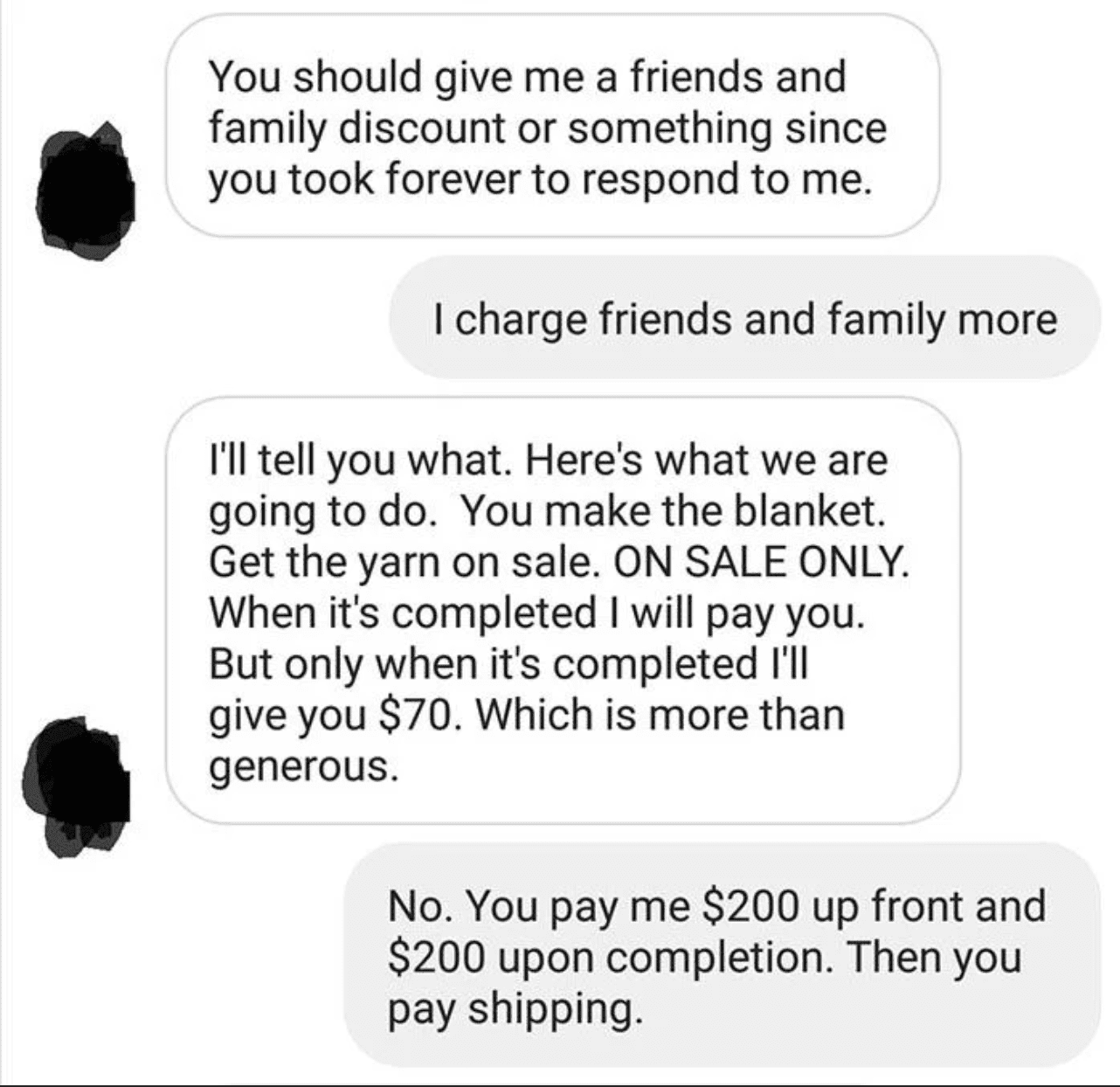 Now he’s moved on to trying to give her business lessons, which she clearly doesn’t need. 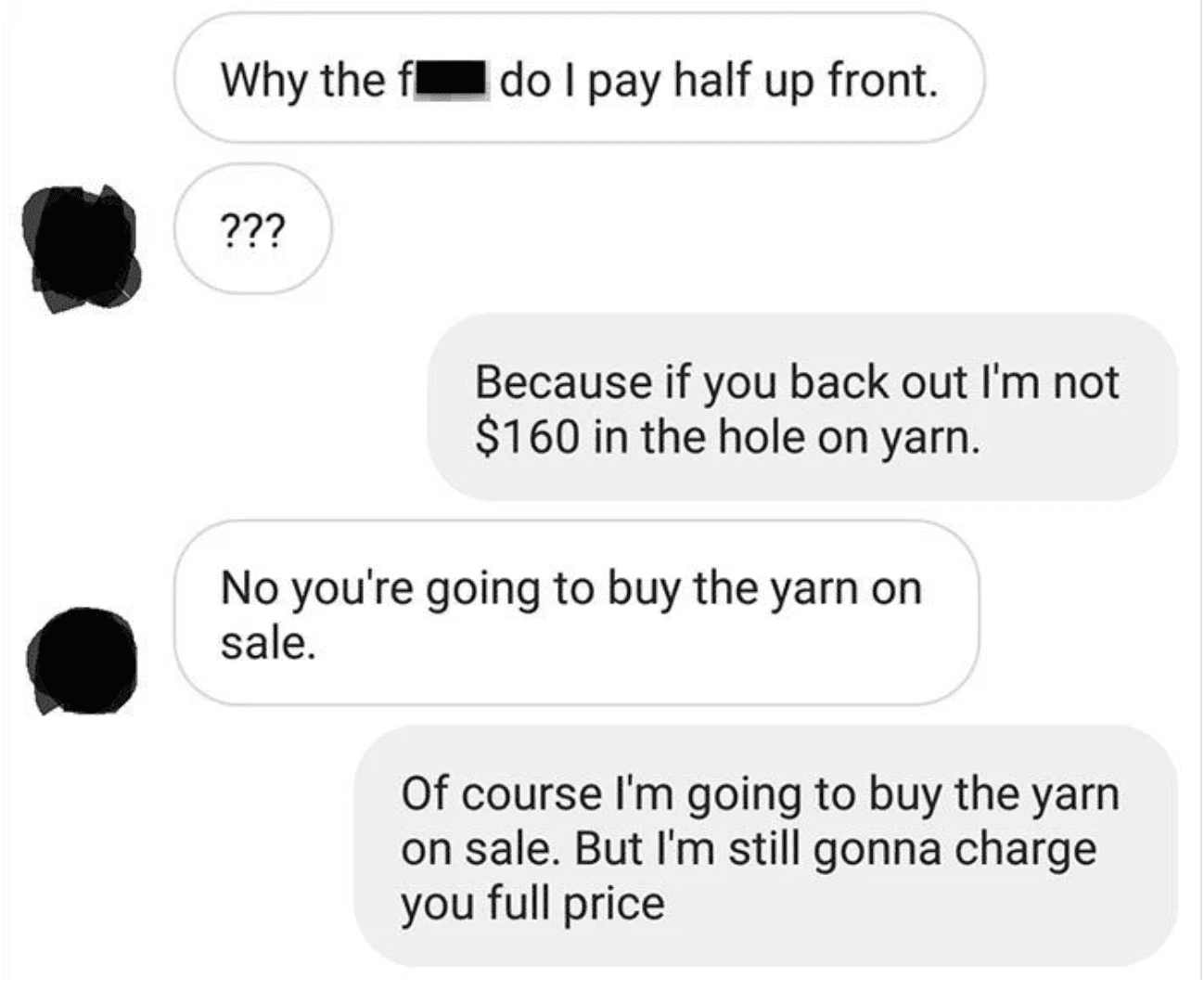 And then he tries the “I’m going to report and tell on you!” tactic that’s so popular on the internet these days. 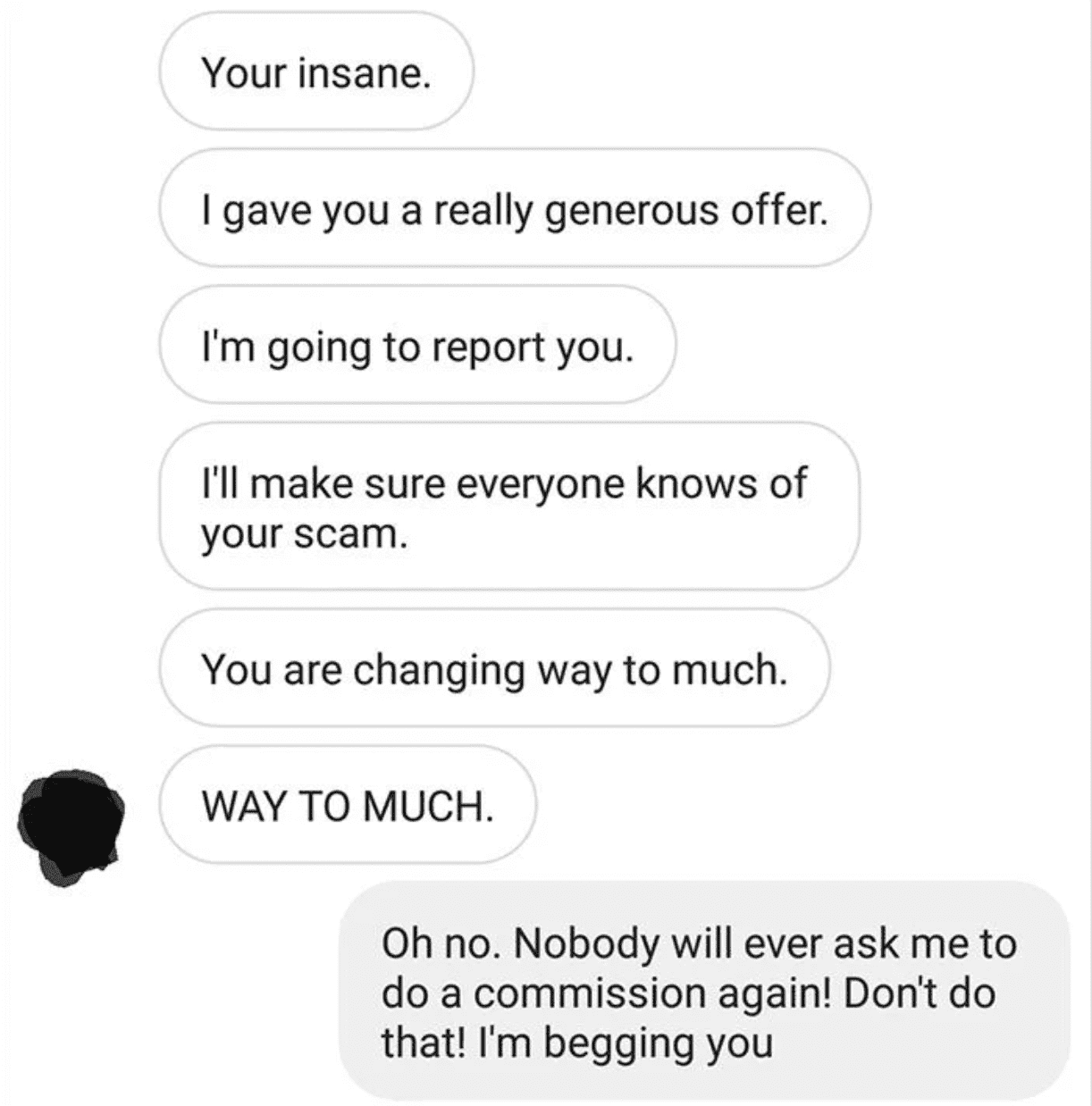 His ineffective threats really seemed to get under her skin. Ha! 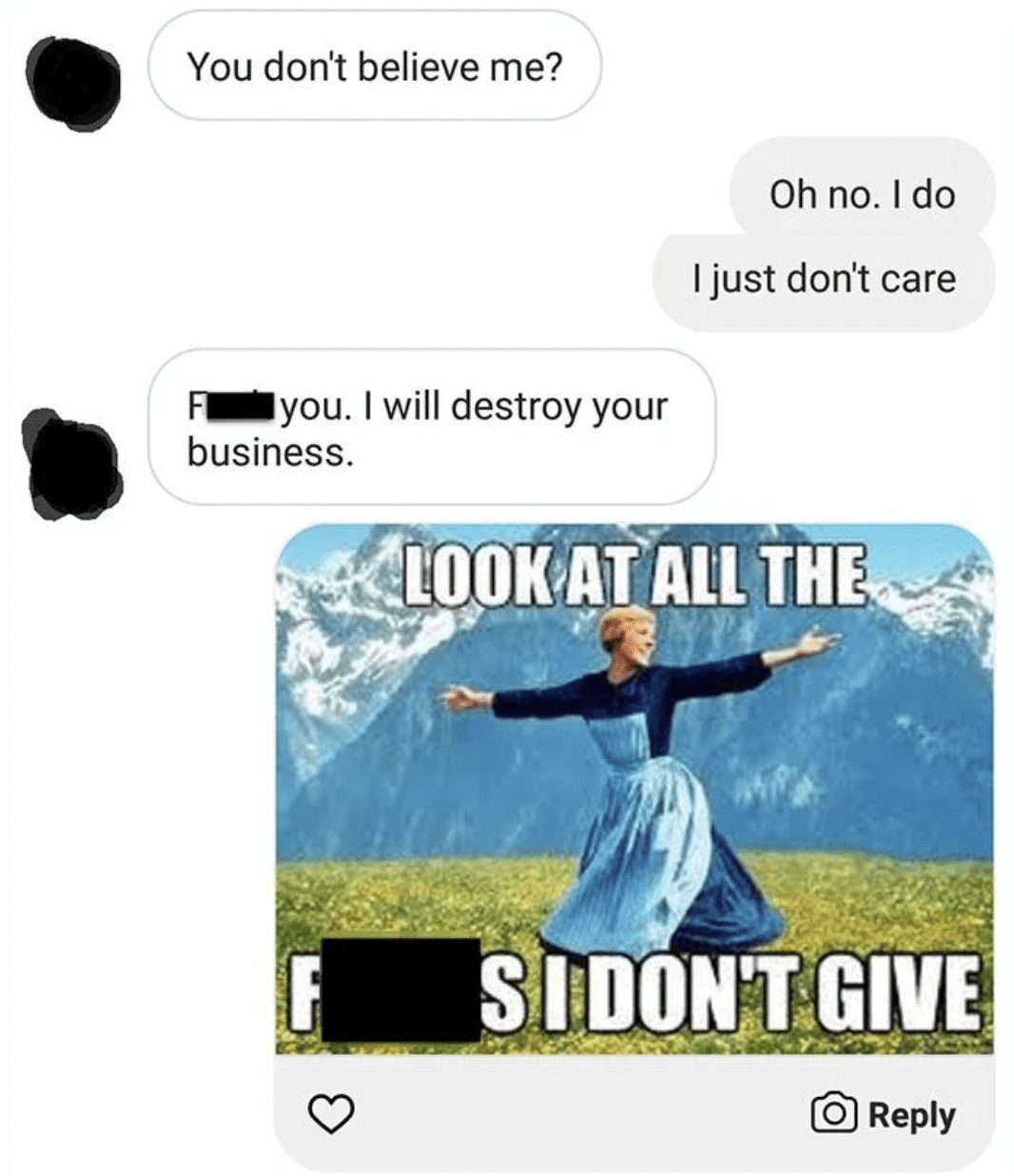 You will find more to love with every response. I know I have. 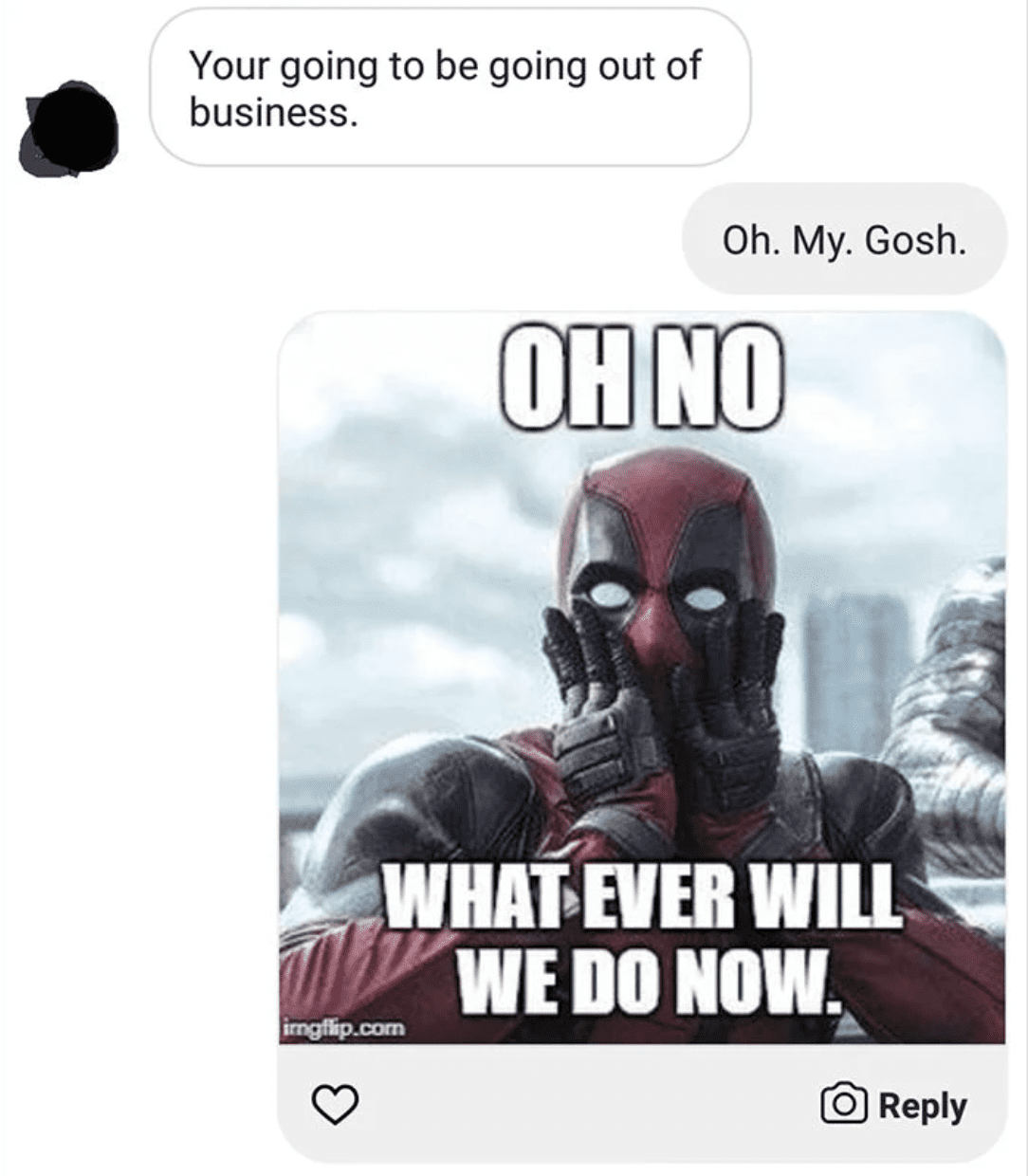 In the end, the person who wants the blanket realizes they’re not going to get it, at least not for the price they wanted, and also, they can’t intimidate OP. 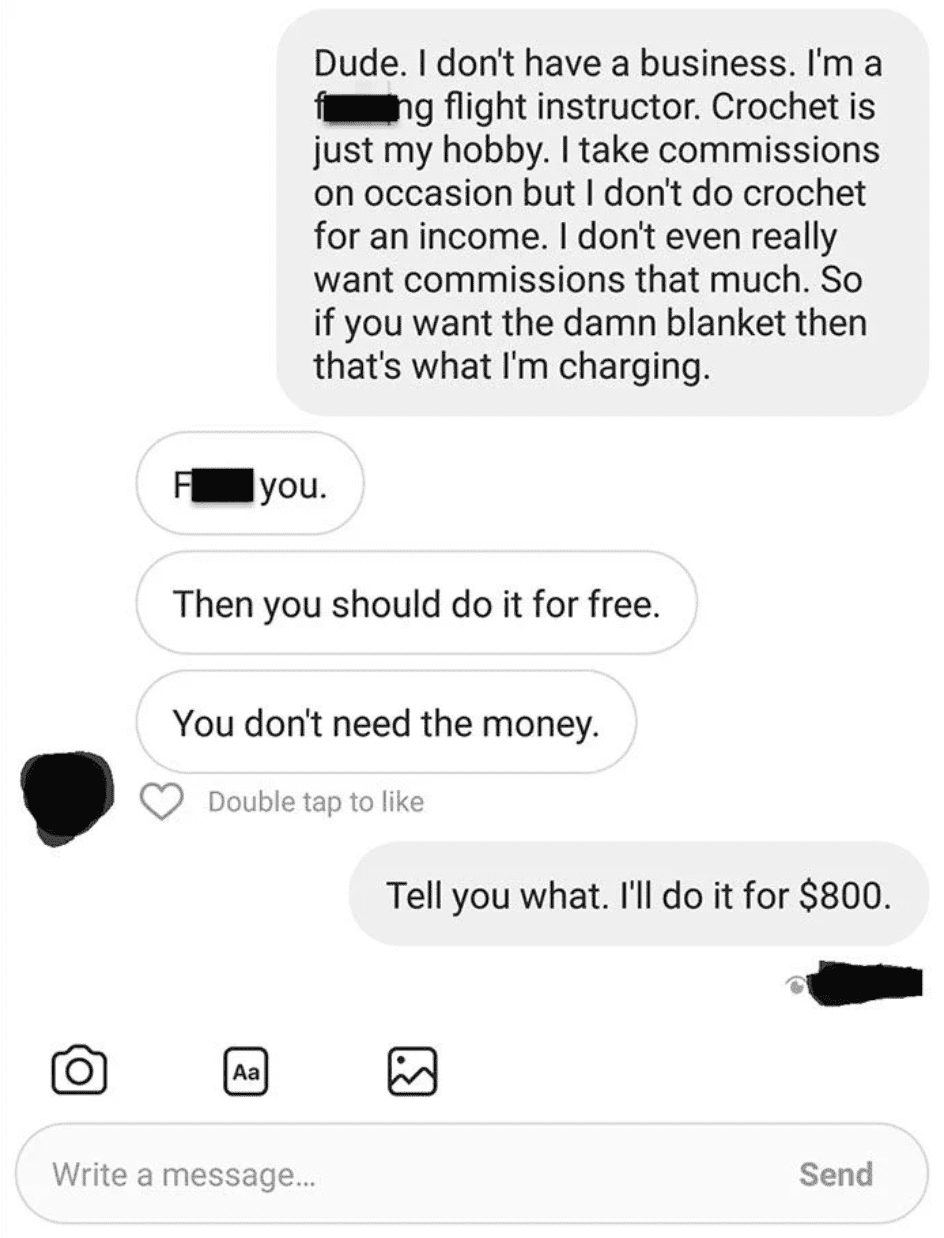 Bad day for them, I guess, but score one for the little guys.

Who is the most entitled person you’ve ever encountered? Tell us the story in the comments!