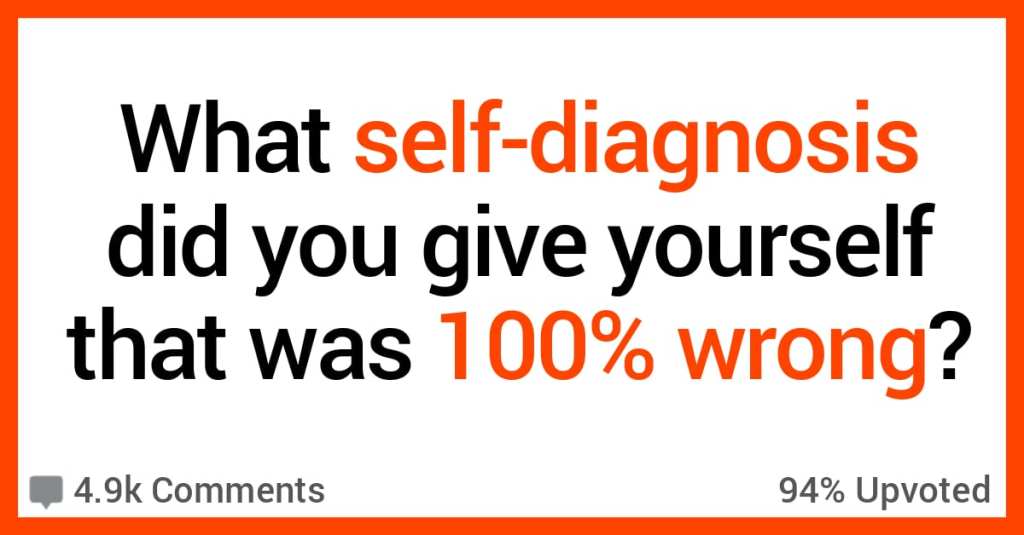 A friend of mine constantly thinks he’s sick (and that the world is ending) and so he gets onto WebMD constantly to try to figure out his latest ailment.

Who would’ve guessed? A guy that doesn’t have any medical training was way off base?

Have you ever given yourself a self-diagnosis that turned out to be totally wrong?

These AskReddit users have and they shared their stories. Let’s check them out.

“I thought I had food poisoning for a month.

Eliminated everything possible from my diet and started probiotics to reset my digestion.

Turns out it was a late-life pregnancy.

We’d thought we were past that point. Surprise!”

“I had a migraine for six weeks straight.

My mom was sending me articles to convince me I had some sort of brain leakage.

It turns out the migraine was caused by my birth control.”

“I get extremely itchy on my belly and groin area.

I always think it’s because I did a bad job rinsing soap off after taking a bath.

It’s because of the oral steroids I take for my allergies.

This has happened FOUR TIMES in the last five years, and I forget EVERY TIME.”

“I was for sure positive that I had Crohns Disease.

Literally almost every symptom applied to me.

Nothing. Not a thing was found in either my colonoscopy or upper GI endoscopy.

Yeah. It turns out that I just drink too much.”

“I went to the hospital 3 different times because I thought I was having a heart attack.

Turns out they were panic attacks each time.

I have meds now to prevent panic attacks.

One doctor was annoyed which I found funny.

Dude, I thought I was dying.

One of those trips involved a volunteer fire department and an ambulance ride because I was camping far from any hospital.”

“I thought I was finally having a mental breakdown, turns out Benadryl just makes me have manic episodes.

Not sure why since it should make me sleep instead of pace up and down the hall for 6 hours.”

“When we were going through an airport I noticed a small red rash behind my brother’s ear.

It looked like a spider bite or a mild reaction to something.

My brother, a massive hypochondriac, immediately convinced himself he had both meningitis and brain cancer.

Insisted we see a doctor as soon as we land.

By the time we’d landed the rash had cleared up.

Not the only time he’s done something like that.”

8. Good thing you figured it out.

“When I was a kid I had a little twitch in my eyes and I thought it was Tourette’s (probably because of that one South Park episode).

Turns out I had epilepsy and they were mini seizures.”

“When I was 15, my chest started hurting whenever I ate. A lot. For like a week.

So we went down to the local clinic and suggested that I might have acid reflux. They took my word for it instantly and put me on prilosec, didn’t even question that I might not know what I’m talking about.

A week later I was in the emergency room. Dangerously malnourished, so dehydrated my p**s was almost brown, and with chest pains so bad I could barely even LOOK at food. Pancreatitis. Autoimmune pancreatitis.

My immune system was eating away at my pancreas. Not acid reflux.”

“Had a bout where for around a month I would spike a fever for a few days with sever lethargy which would eventually fade, only to resurge after i started feeling better.

I eventually made the connection that it resurfaced every time I ate red meat (burgers are my weakness). Decided it was a red meat allergy.

“I thought I had strep throat, but it was an allergy to a new toothpaste.

The white I saw covering the back of my throat was, upon closer inspection, tons of canker sores / mouth ulcers.

Went to my dentist who confirmed and advised me to change toothpastes.”

“I was nauseous and vomiting all the time at work and home and just about everywhere else.

I thought I was in liver failure, the first two doctors I saw dismissed me, said it was the flu (can the flu last 6 months?)

The third doctor I went to was skeptical but I demanded a full blood panel, turns out I was wrong, it wasn’t liver failure it was kidney failure.

The doctor was stunned and extremely apologetic.

I totally needed a kidney transplant and it saved my life.”

“I thought I had psoriasis because I would get these horrid rashes and flaky skin on my stomach.

Kept putting it off because it would just randomly go away sometimes.

Finally went to a dermatologist and turned out that I’m allergic to nickel and she showed me that my belts were causing the irritation with the nickel belt buckles.

So now I buy rubber or plastic belt buckles, the only other options are real silver or gold belt buckles, which seems excessive.”

In the comments, tell us about a really bad self-diagnosis you gave yourself.

We can’t wait to hear your stories!