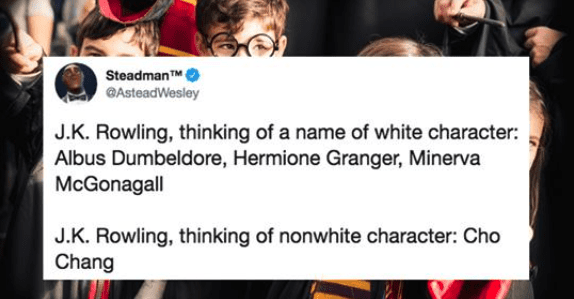 Lately, readers have been taking Rowling to task for how she chooses the names of her characters, claiming that she’s perpetuating cultural stereotypes with some characters’ names.

Here’s the Tweet that started it all. It’s from Astead Wesley, a reporter for the New York Times, who took issue with Rowling’s name for one of the main Asian characters in the series.

Other people piled on, pointing out that Rowling also picked some pretty stereotypical names for Indian character:

And then there’s her descriptions of some characters:

Ok but also also there’s an entire race of sneaky grubby hook nose creatures that are good with money.

Some people came to Rowling’s defense, arguing that people are just hunting for instances of racism and cultural insensitivity in the books:

Kingsley Shacklebolt, Angelina Johnson, Dean Thomas, Lee Jordan, Blaine Zabini, Parvati and Padma Patil, Cho Chang. People want to remember the books how they want to. It’s written by a white woman so it must be racist. *sigh*

And that no matter what Rowling did, she just couldn’t win:

She either gives PoC names relevant to their origin or gives them Anglo names which erase their culture. Either way people will complain.

Others just didn’t event want to go there:

It’s hard to know exactly what process Rowling used to come up with the names of her characters. Unless she spills the beans, we’ll never know for sure what thought she did and did not put into avoiding or perpetuating cultural stereotypes, it seems.

What do you think about this debate? How do you feel about Rowling’s names?