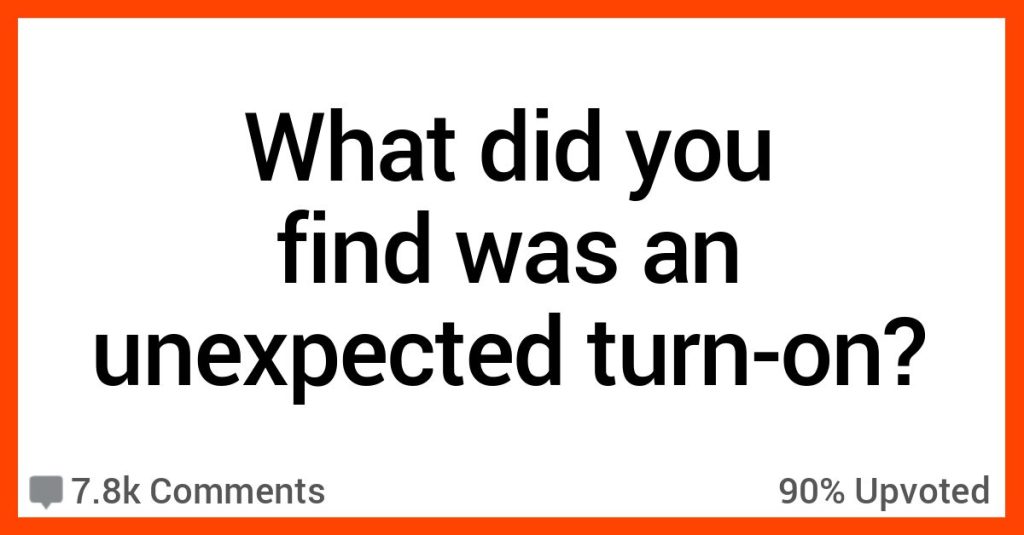 You know that old saying “don’t knock it ’til you’ve tried it?” I think it applies to most things in life (at least, that’s what I tell my preschooler when I’m trying to get him to try new foods), but mostly, it’s important not to judge other people’s tastes unless you’ve given them a go yourself.

If you do, you might just end up like these 19 people, who only figured out something turned them on by giving it the old college try first.

During my photo op at Comic-Con, Peter Capaldi turned to me and said, “How do you want me?”

I have no recollection of how I made it out of there alive.

18. Everyone’s got their own thing.

For my girlfriend in college, it was running my fingers down her back. We were playing video games one night and she went to go grab something from the kitchen and I kind of motioned at her like I was grabbing her to stay and my finger brushed the small of her back.

She froze and turned around, face red, and told me to do it again.

It was pretty much a cheat code. I’ve never met another girl that it worked on since.

Having my hair pulled.

As a kid, I always had very, very short hair. When I moved out, I decided on a whim to let it grow. Eventually it got long enough that I could put it in a ponytail.

Then, one day at work, for reasons entirely unknown to me, one of my coworkers reached out and gave it a firm tug. Surprised the hell out of me.

I had a girl who bullied me through high school and then when we were at a party she pulled me into a closet and we had a hate f**k.

Have never talked about it, she went back to bullying me after.

I asked a friend of mine: ‘You’re a gentleman, you’re not going to tell us what you like in the bedroom.’ His response: ‘I will tell you this, I’m a gentlemen everywhere… except in the bedroom.’

Turning someone else on.

It’s this that led me into my dom shit.

I’ve said this before… But when a guy takes his glasses off when we’re making out. It’s like they’re getting in the way of our passion, so they have to go. I

have to go make out with my bespectacled boyfriend now… lol.

This guy once murmured ‘good girl’ to me as I came and now I literally can’t hear the words without becoming immediately aroused wtf.

Strangely enough, the biggest turn on ever for me was the simplest thing in the world. My girlfriend at the time, back when I was in high school, kissed me on the cheek as she was getting off the bus, and I still remember it to this day.

It felt so genuine, that I can still remember it over 20 years later. No other kiss has ever done it for me.

My very basic take: I remember as a kid wondering why hookers/strippers would always be portrayed in fishnets, thought it was such a dumb piece of clothing.

As an adult… that’s definitely no longer the case

My ex once slapped me across the face HARD while we were making out. Turned me on the most I had ever been at that point.

Unfortunately after that she also started hitting me outside of sex… Then she cheated on me with her ex… So yeah. Not a great end to that one.

…..Being on hold with Capital One while with my partner. We were chilling out while on hold to ask about a promotion, but the wait time was over 30 minutes.

He was balls deep when the poor representative popped up on the phone. My husband kept drilling me, one hand over my mouth while he held the phone with his other hand.

His smarmy ass then proceeded to monotone through the entire fucking (literally) call, getting the information he needed about the promotion, and giving information and ya know, speaking calmly and plainly, while we simultaneously were just GOING at it there in bed.

I swear not at any moment did he take a weird breath or sound weird or anything, but he had to shut me up because I was about to scream.

I dunno. This was two weeks ago and I’m still just thinking about it, thinking of reasons for us to call a line that will put us on hold.

I bet this is a thing. I definitely wouldn’t do this “in public” or with the possibility of being seen, mostly because my husband and I are pudgy sacks of ancient flesh, but that whole “we’re doing something naughty but you don’t know it” reminds me of those times when your boyfriend was totally trying to cop a feel while on the couch with you at your parents house. But your dad was in the room. Something so -spine tingling- about it.

What’s hilarious is I hate being on hold. I mean, who likes it unless they are at work and being paid to be on hold? Anyway, I just love that we’ve been together over 13 years and the sex is better than ever, the closer we become and more layered and complex and rooted the love gets, the lovemaking? It’s fucking gold you guys. THAT turns me on. Imagine that. Monogamy! And Hold music! I’m a weirdo!

Okay, so this is definitely weird. I hate my sides being touched unless I know you/trust you. But when it is that person who I know and trust, holy f**k.

There is a small area that drives me crazy if kissed. Feels so nice.

My sexual awakening was one of my friends jokingly pinning me against a wall with my wrists above my head and getting up in my face. Years later same friend punched me in the arm and it turns out I’m a masochist

Wild coincidence both times – I’m not attracted to her, I guess she just has insane dom energy

Having that someone moan/breathe in your ear.

3. Burned into their brain.

Watching myself. Im very sensitive on my neck, like kissing or biting, especially the back, but I knew that.

But standing in front of a bathroom mirror and watching him behind me while he did that was insane.

It’s been a few years but the scene got burned into my retinas.

Now any Scottish accent is just music to my vagina.

Her calligraphy and penmanship; it was so damn accurate and quick at the same time I couldn’t believe someone owned hands like that!

I kind of love threads like these, because it reminds us that we can grow and that it’s ok to change our minds.

Has something like this happened to you? Tell us about it in the comments!