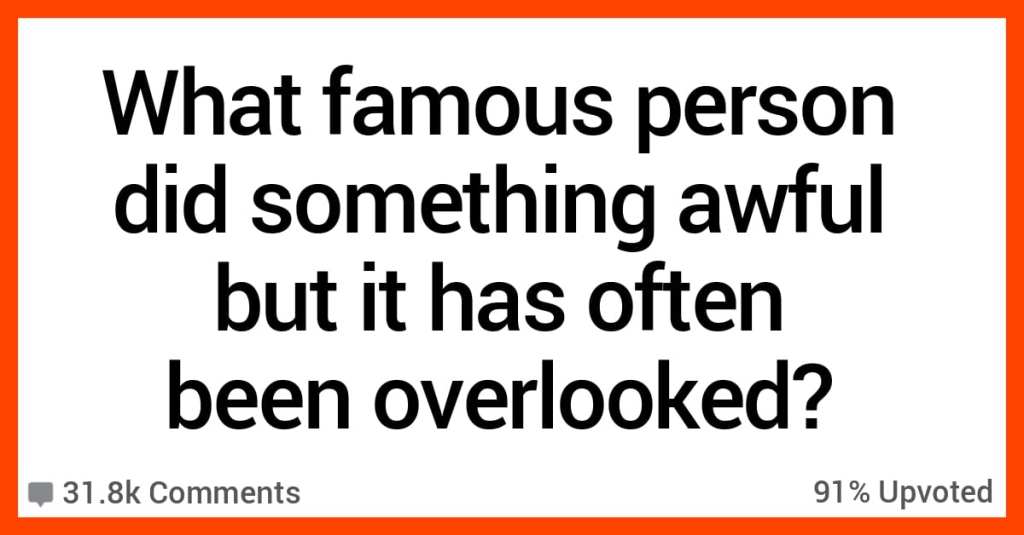 I’m probably not telling you anything you don’t already know, but Hollywood and the celebrity universe is filled with scandal and strange things that sometimes fly under the radar.

Or, sometimes we do know about these awful things but they’re overlooked by the public for one reason or another…

Are you ready to hear about some celebrities who did some bad stuff that is usually overlooked?

He captured and tortured someone. Chained him in his room.

I believe he only served a short sentence.”

“Just everyone that’s with the church of scientology. An organisation KNOWN for their sh*tty and psychotic practices.

From Tom Cruise to John Travolta. They’re all ignored because they’re A-List actors even though they’re involved in a godd*mn cult.”

“I really don’t understand how Andy Dick hasn’t been cancelled, he has been waving his d*ck where it doesn’t belong and touching people inappropriately for 30 years.

This isn’t even a secret, I guess people just don’t think about Andy Dick.”

“Elvis Presley met and pursued (his future wife) Priscilla when she was 14 and he was 24.”

“Vince Neil killed the drummer from Hanoi Rocks in a drunk driving crash and got off with zero prison time.”

Mark Wahlberg was originally busted as a 15 year old for attacking 4th graders for being black.

Two years later he robbed and beat a Vietnamese man for being Asian, then beat another man for also being Asian. One of his victims was permanently injured.

Then he became Marky Mark!”

He would also make multiple young women sleep naked with him so that he could test his faith and his control over his body .”

“Robert Wagner and Christopher Walken were out on a boat with Natalie Wood when she went overboard, not knowing how to swim.

“How has nobody said Sean Penn?

He hit Madonna over the head with a baseball bat when they were together.

Broke into her (their) home when they were on the outs, tied her to a chair with cable, cut off her hair and beat her. Also left her there for like nine hours apparently and came back to continue.

Then he forced her to perform s*x acts on him.

She managed to get away at some point and get to the cops.

But she didn’t end up pressing charges.”

“Roman Polanski drugged and r*ped a child, then fled America rather than serve his sentence.

Yet Hollywood folks still work with this child rapist and fugitive from justice, France won’t extradite him, and people actually say he should be “forgiven and allowed back from exile.”

“President Grover Cleveland r*ped a woman, impregnated her, stole her child and gave it to friends, and theb forced the state to institutionalize her.”

12. Haven’t heard that one before.

“Jackie Chan disowned his daughter for being lesbian and is a Pro Beijing supporter despite being born in Hong Kong.”

“The Greatest Showman was an awesome movie, but it portrayed PT Barnum in a very positive light.

His very first exhibit was a black woman who he bought from an acquaintance of his (slavery was banned at that time, but he used a loophole to evade that). He ended up holding a live autopsy of the black woman once she died and cut up her body in front of a crowd.

He confessed to owning quite a few slaves in his life and whipping them. They worked very long shifts without sufficient breaks.

His treatment of animals wasn’t very nice either. He had this training method for elephants where he’d shove hot pokers up their trunks. His handlers carried sharp hooks which they used to hurt the elephants. He kept two beluga whales in the basement of his museum for a couple days, though this was kept short by them dying.

Oh, and the guy with dwarfism in the movie? He was 4 years old when Barnum hired him. Barnum had him drinking wine and smoking for the audience.

And he dehumanized his performers a lot. He claimed that people with deformities were part animal or not human at all. Signs would say “What is that thing?” Etc.

He was definitely not Hugh Jackman.”

This one doesn’t get a lot of publicity, but to the locals, it’s just a known fact.”

In the comments, share some more scandalous stories about big celebs that get overlooked a lot.