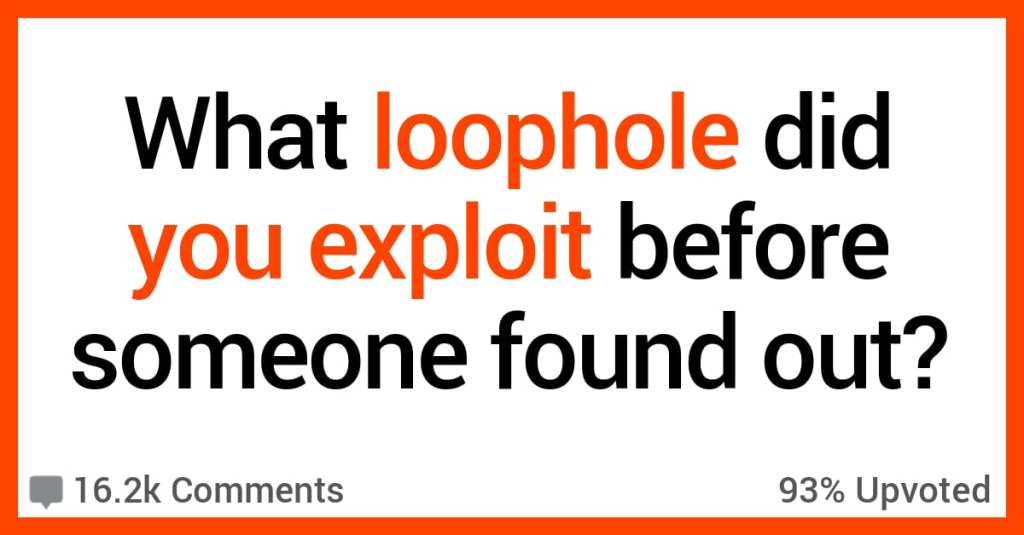 Confession time! I had a roommate in college who worked at Chipotle and he used to HOOK IT UP for us.

A little short on cash? Head to Chipotle.

Need a break from studying? Head to Chipotle.

Trying to impress a girl on a first date? Two burritos, please! And load ’em up, buddy!

When he quit working there, it was a dark, dark day for me…I’m still kind of mad at him for it…

What loophole did you exploit until someone found out?

“When Lyft first came out, they were giving away free rides up to like $20-30 if I remember correctly, all you had to do was refer a friend.

So me and my college roommate just made a few email address, and somehow my free rides glitched and I just kinda had free rides for the year.”

“At my current apartment complex, they just changed the laundry machines so you need to use this super sh*tty slow app.

Been washing and drying for free for a few months.”

“The thing we clocked in on when I worked at Kmart would round to the closest quarter hour.

So by clocking in 8 minutes early, and clocking out 8 minutes after my shift, I got paid for 30 minutes rather than for the 16 minutes. By exploiting this, I was paid 2.5 hours of overtime a week.

Cumulatively, during my time there, this added up to about 6.5 weeks of extra pay. I wasn’t ever caught, though.”

“There was a soda machine that was really old that would still charge $.25 for a can of soda.

Pretty soon I realized that it would give you a can for free if you just mash the buttons repeatedly.

It was the best part of grocery shopping.”

“I had a killer racket in school.

I would buy the graduating classes used textbooks for like $5 and then sell them to a third party book seller in the next town over who would pay me between $25 & $30 for each one.

Eventually people started asking questions and others figured out the deal.”

“Photoshopped a college parking pass to hang in my rear view mirror, complete with a fake barcode.

Even had it laminated.

7. Time to redeem the tickets.

“There was a machine at an arcade similar to Dave and Busters called Round 1.

One day, im there with a group of friends, and I go to the prize area. I see three kids with funko pop dolls stacked over there heads, headed to the register. I jokingly ask what their secret was. They won’t tell me, so I said I’d tell them my ticket making secret in exchange (mine sucked)

They inform me there’s a machine giving more tickets than normal. I go find it and it’s one of those mobile games turned arcade machines that no one would ever play. I play it once and get 700 tickets for probably $0.50.

To put in perspective, a 3DS was 40,000 tickets. I play it for about an hour, and get enough for a 3DS. We got so good at the game, wed win the jackpot everytime and itd give us 6000 tickets. It would take 15 minutes for the machine to just count it all.

Long story short, my friends and I stayed all day the next day and made enough tickets to get 2 PS4s, 2 Wii US, and 2 3DSs. It was such a lame game, no one ever bothered to try and play it besides us.

They eventually found out later that day, as they walked over to me while I was playing to observe the game. I just walked out, drove to one a town over just to be safe and redeemed all my tickets.”

“Worked at a grocery store as a cashier for about 5 years.

They had a reward system where you scan a points card every purchase and eventually end up getting back about 1% of the money you spend. But every time a customer didn’t have a points card, and didn’t want one, those potential points would go to waste.

I couldn’t scan my own card, so I went to a different location and signed up for a new card with a fake name. Then I just photocopied the bar code from my points card, and taped it to the bottom of my wrist.

So for a few years, every time I had a customer that didn’t want to become a member, I rolled up my sleeve for a second and scanned my wrist and all their points would go to my untraceable fake account.

After it was all said and done, by the time I quit that job and moved on I walked out of there with thousands of dollars toward free groceries.”

“Printers at the university had a flaw that let you print out any number of pages while just paying for a single page.

I told too many people about it and they eventually fixed the problem but I was able to print for really cheap and save a ton on printing.

I normally am not the kind of person to do this, but our professor made us print out 20 page state diagrams instead of just submitting them electronically, and I wasn’t going to pay for that.”

“Whole Foods used to have bacon on the Breakfast Bar.

Cooked bacon weighs almost nothing! I would get a pound of cooked bacon for $8.00 It lasted almost a week! Bacon crumbles for the salad, for the turkey sandwich, and the 100 other things that you can toss bacon into!

I used this method for almost a year, then they stopped putting bacon out….sigh……”

“I used to work at a grocery store and we had this era of the steak discounts.

Hundreds of coupons for $5 off a steak were just everywhere for some reason. I found out that if I used the self checkout and bought a steak that was less than $5 while using the coupon, the machine would give me back the difference in change.

I ate dozens of free steaks and filled my change jar up nicely.”

“When I was in college they had this deal where if you signed up for a free trial of Netflix you could get a $10 giftcard code for Papa John’s.

They didn’t even ask for a credit card back then, just an email, so I would just make new email addresses to use and would get a code every time.

Not only did I get free Netflix for a while, but I also got a lot of free pizza.”

What loopholes have you exploited before?