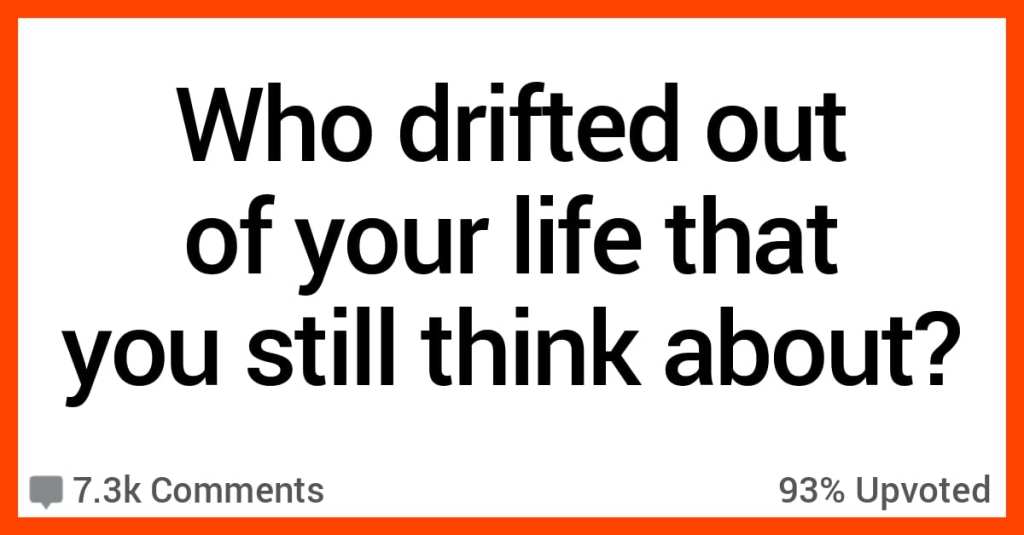 It’s easier than ever to track down people these days with social media, but there are always a couple of people from my past that I wonder about that don’t use Facebook, Instagram, Twitter, etc.

What happened to them? Where did they end up?

And I bet you have a few folks in your life like this, too…

AskReddit users discussed the people they still think about who drifted out of their lives. Let’s see what they had to say.

“In third grade, there was this black kid (only one in our grade) who was absolutely hilarious. He was a complete spaz and the whole class ate it up.

Then one day he gave out invitations to his birthday party at some arcade, mini golf, and go kart place. Every kid’s dream. The popular girl in the class laughed and said “why would I go to this?” and threw out the invite.

Several classmates followed. The day of the party comes, and it turns out it was literally his family and me that showed up. He didn’t seem to care, but you could see the hurt in his parents eyes. Honestly, that party was an absolute blast because it meant more tokens for each of us.

After that school year ended, his family moved to DC and I never saw him again. I still think about him sometimes to this day. Kids can be so cruel.”

“There was a girl with a speech impediment when I was in 1st grade. I thought she was cute and would love to hang out with her on the swing sets. Nobody talked to her because they were either shy or felt she was mentally disabled.

Our class did a butterfly project where we were all given a caterpillar to raise. They came in these little plastic containers and hers ended up dying. I switched mine with here without her noticing and told the teacher mine d**d instead.

The teacher got me to partner with somebody else and I was okay with sharing. The girl was really happy to see the caterpillar become a monarch and released that Spring.

I never told her what happened to the caterpillar and she eventually moved never to be found again. I tried to search her on social media but no luck.

Weird how that still crosses my mind now and then. This was 2001 for me.”

“Benny. He was my best friend for a long time.

We were closer that I was to my real brother. Then he and my brother’s girlfriend fooled around and fu**ed everything up. We parted ways, I got clean and went to school. He stayed in it and lived the life I always thought I wanted.

Now, his family never mentions him on social media and I don’t know where he is. I hope he’s OK. Maybe I shouldn’t, but I do.”

4. What happened to him?

“I got married very young. My wife and I were friends with another young couple.

They broke up right after their first kid and then the husband went out and got two other women pregnant.

We rarely fight but when my wife and I have a fight I think about him.”

“Hey Julien from Edmonton, if you read this- it’s me!

You had the coolest indoor sandbox, and you gave me my first kiss while we were painting Easter eggs.

Always wondered what happened to you after my parents moved us!”

He’s an interesting guy who toes the line between hilariously gruff and sometimes rude in a roasty way. It sounds odd, but it works – he treated us students like he did his friends and other adults. He was the real deal and even though I was far from his favorite student, to this day I respect him.

He had a scandal a few years ago and resigned from his position as Vice Principal of the STEM school. Knowing him more personally than the outside world, I gave a respect for what he was trying to do and his intentions. He fell on his sword to protect the fledgling school’s reputation and faced intense personal hate from ridiculous evangelicals because he’s a gay man.

It’s funny you asked this, I was even thinking about him today.”

“My best friend in high school. We stopped talking on a bad note.

I stayed friends with her mom and brother on FB for a while, but slowly we all deleted our accounts.

I wonder what she’s doing now and how everything is going for her and her family.”

8. Hope they turned it around.

“As a recovering addict, all the people I did drugs with.

Most were degenerates but some I know could be great members of society if they could get clean.

I often wonder what they are doing right now, probably not good things but I bet some turned their life around and it would be cool to catch up.”

“I wonder about my uncle, when I lived in my small hometown with my mom he’d come over every couple of weeks to just hang out and talk.

I asked him shortly before I moved out on my own if he wanted to go to a comic book convention with me, but he never got back to me.

“My 2am walking buddy/protector from college.

After a bad relationship ended, I had a more than year long bought with insomnia. Living on campus, by 2am I’d just be itching to get out of my dorm room and walk off some energy. I’d walk around campus in the dark, by myself from about 2-4am every night just way up in my own head.

One night this guy I didn’t know, but who I’d walk past at the s**king area every night asked if he could walk with me since he was bored, couldn’t sleep and figured he might as well walk while he smoked. We fell into an easy, nonchalant rhythm with each other and we walked together every night thereafter until I started sleeping again.

We were buds, but only between 2-4am. We kept things light, and chatted about media, books and classes mostly. Sometimes we’d just walk silently for long stretches and it never felt weird. He was a cool guy who in hindsight was probably just trying to make sure this nutty girl who walked by him every night wasn’t going to get assaulted alone in the dark.

I was so self-obsessed at that point that none of this occurred to me. I think about him now and again and I really hope he’s had a great life!”

We dated in high school, and it was cute, but was going nowhere. Then, as adults, we ran into each other again. The love and fun times were authentic, and we both were better people with each other. I knew our love couldn’t work, because we both wanted two entirely different things out of life. It was a case of being too opposite to attract.

The break up hurt us both, and just a couple years after the fact, I had my son. She liked a picture I had posted of him, and she blocked me from there. I think that was to save us both any sense of longing.

Fast forward six years, and I ran into her family at a restaurant and spoke with them a bit. She’s married now, living on the other side of the world in Australia. Her husband is a teacher, and it made me happy to hear it.

There was a song I used to sing with her, and a lyric in it goes, “…Even though I haven’t seen you in years, yours is the funeral I’d fly to from any where.” It still stands true.”

In the comments, tell us about the people you’ve lost touch with that you still think about.