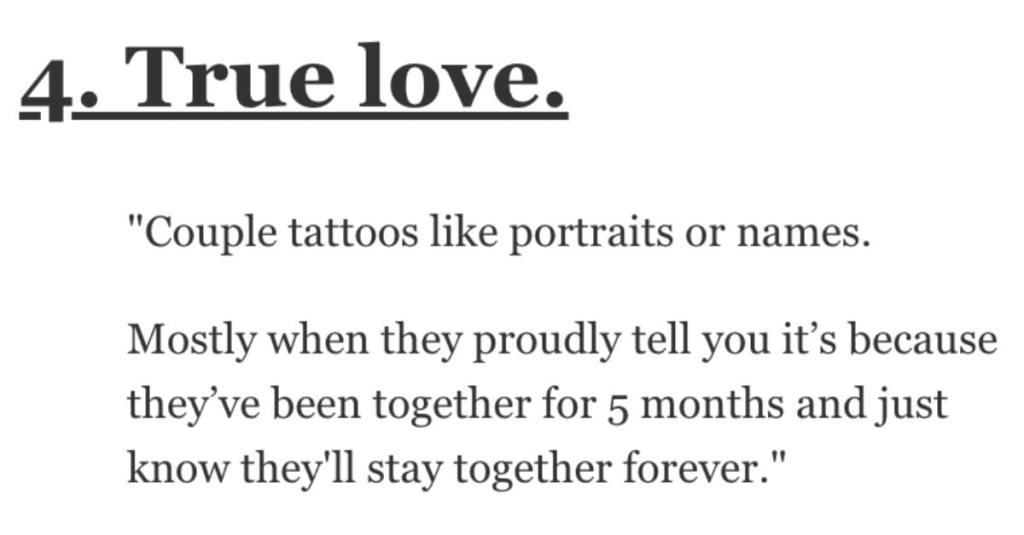 People Discuss the Tattoos They Think Are Totally Embarrassing

Now, keep in mind that these are just MY opinions, and what the hell do I know?

But I’d have to say: Taz, tramp stamps, most bands, old girlfriends or boyfriends that the person no longer speaks to, and portraits of celebrities (besides Elvis…).

Whew! That’s kind of a lot!

What tattoos are embarrassing?

Let’s get cringey with folks from AskReddit.

“I work with the deceased. I’ve seen a direct correlation between “ONLY GOD CAN JUDGE ME” tattoos and being a victim of gunshot homicide.

2. Maybe not the best idea.

“A defendant in the courtroom I clerked in during law school had “homicide” tattooed on his face, over his eyebrow.

Not a great look.”

3. I guess there are a lot out there?

“Calvin from Calvin and Hobbes peeing on stuff.

Except the one from Hot Rod with one stream of urine going on the TV set and one going on the FM radio with an AM radio safely dry in the middle on a magic carpet.”

Mostly when they proudly tell you it’s because they’ve been together for 5 months and just know they’ll stay together forever.”

5. Really passionate about it.

“Knew of a guy once who had “DUBSTEP” tattooed on his chest in VERY VERY large letters.

He also insisted that dubstep was the future of music and was here to stay.”

“Lips on the neck.

I get it, you’re a gangster with an attitude problem and you probably want to fight.”

“I once stood in line behind a lady who had, like, the bad tattoo parade going from the nape of her neck.

She had “Only God Can Judge Me”, something in Asian characters, and an ugly, faded, poorly drawn crucifix.”

“Those creepy faces of babies.

It looks like there’s a little demon on your body.”

“The people who put words from a language they don’t understand cause its quirky and 99% of the time it isn’t proofread so it doesn’t say what they think it does.”

“I saw a kid with the 100 emoji tattooed on his forearm.

I don’t even have a joke to make about that.”

“I was in line behind a guy who had a tattoo on his neck of two obese, naked cartoon women going at it.

“I hooked up with woman who has a tramp stamp which reads “Damaged”.

The font is fairly terrible so the first time we had s*x, I thought it said “Demigod” which while arrogant and odd, wasn’t enough to stop the arousal of my primitive monkey brain.

The next time we had s*x and I realized what it actually said, it really took me out of the moment and I never went back.

It’s hard to avoid people in a small town, but it’s gotta be even harder to keep a tattoo like that from becoming quality gossip.”

“Had a lady come into the store I was working in with a big neck tattoo that said Daddy’s Girl….

May have been the most shocking one i’ve ever seen.”

Had a regular come into the shop, he was an older swinger type and my coworker tattooed him.

He got Pinocchio tattooed above his junk with his penis as the nose, and script that said “Lie to Me”

I try not to judge tattoos but I figured you’d all appreciate this one.”

“I have a tramp stamp that says “no regrets” in very fancy cursive.

It’s the only tattoo my dad laughed at rather than cringed.

I can judge no one.”

What tattoos do you find totally embarrassing?

Talk to us in the comments and share your thoughts!