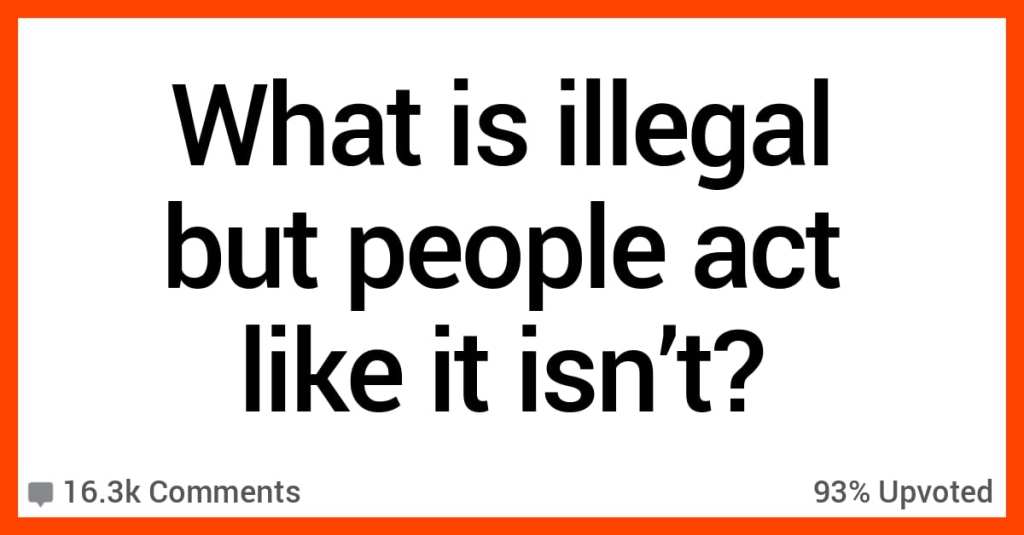 I’ve never really thought about it much before, but a lot of people really do pick and choose what laws they want to follow.

Isn’t that kind of weird? I sure think it is.

And a lot of folks out there act like some things are legal when they TOTALLY AREN’T.

Let’s see what folks had to say about this on AskReddit.

I don’t even care that it’s illegal, it’s the apathetic act itself and its repercussions that bother me.”

“So many things with driving. Speeding, using your blinker, not passing on the right.

Don’t get me wrong, I do it to, but driving laws are definitely seen more as guidelines when a cop isn’t right there in front of you.”

“Using a cellphone while driving.

I’ve seen so many people on their phones at stop lights. Light goes red, head goes down to the phone. Light goes green… they snap up and take off.

Or texting while driving on the highways. There’s someone I know who would put their phone on the steering wheel and text the whole time when driving.”

“Driving while high or while taking prescription medications that impair the ability to drive.

If you are high you are not a safe driver. Period. You can also be impaired while taking narcotics, strong anxiety meds, or sleeping meds. Yes, some people are fine on anxiety medication. Others are not. DUI means driving under the influence – it’s not just alcohol that impairs your cognitive abilities and motor skills.

I don’t care what drugs of any kind you want to use on yourself. It only becomes a problem when it affects and endangers others.”

The way people (in America at least) just kind of expect all rich people and politicians to have done it.

Like sometimes people get mad but for the most part……yeah no real consequences come from that.”

“S*xual harassment for example people catcalling other people and grabbing their various body parts for no reason.”

“I’ve noticed a lot of older people offering friends and family the controlled substances they are prescribed as if it is completely acceptable.”

“Fair housing laws in US.

Stating that unit is for college kids, no children, woman only, man only, etc are all violations of fair housing. Entering units without proper posting. Evictions. Rent increases.

I can go on and on about illegal actions preformed by landlords. It’s hard to point out these flaws without being discriminated against and not getting housing.”

“Female high school teachers having s*x with their male students.”

“Using a photo, sound clip or music you don’t have rights to.

Just because you can download it doesn’t mean it’s okay to use it.”

“Riding your bike against traffic. Its not safe its dangerous.

You’re considered a vehicle when you’re riding a bike in the street, so must obey all traffic laws like you’re in a car.”

The vast majority of the time you could easily park somewhere legally (or at least illegally but less inconveniently) but people are too self-important and/or lazy to do that.”

“Throwing stuff out of your car window.

It literally makes me want to pick it up and throw it back at you. Deplorable.

Throw your sh*t away at home.”

“Walking their dogs without a leash.

This happened a month or two ago at a park I frequent. The dog kept running after disc golfers and chased people down the sidewalk while the girl just awkwardly walked to it like “Omg so embarrassing lol.”

It ran across the street twice which almost caused some accidents. One of the disc golfers offered to give her his extra leash but his group ended up babysitting the dog while she just stood around not being a good owner.

People yelled at her about the lack of a collar or leash and she just rebuffed the questions like “I knoooowww.” It was just very painful to witness such a lack of awareness.”

Share your thoughts with us in the comments. We’d love to hear from you!