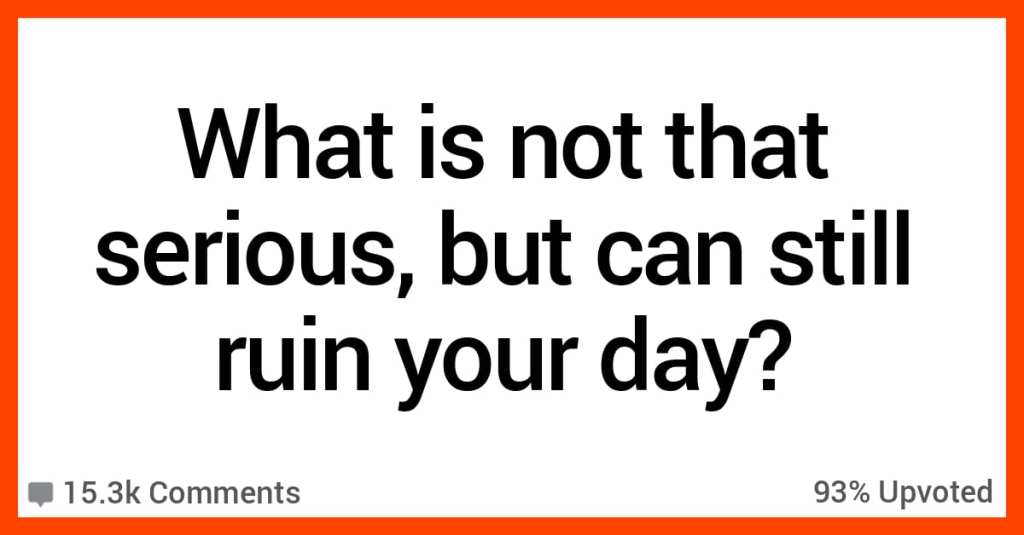 If you’re anything like me, sometimes you let little, inconsequential things ruin your whole.

I know, I know, it’s definitely not a good thing and I’m trying to work on it, but I’m still guilty of letting it happen from time to time…

Do you let things that are not serious ruin your day sometimes?

“Getting in the most comfy position in my bed, but the sudden urge to pee arises.”

“Waking up to the wet choking sound of your cat or dog puking on carpet, with just enough time to hear it happening but not enough to prevent it.”

“It’s going to sound stupid, but back before the times of all online schooling/social distanced sxhooling – someone taking your seat in class.

Doesn’t matter if it was highschool or college I would get very put off from not being in my seat in class. I was told once it’s probably connected to anxiety or something but ehhhhh.”

“Food I had left at home that I was looking forward to eating after a long day at work being guzzled down by a family member.”

“Wrong coffee order. It kills me for the day.

I know it’s not a big deal and I can’t get mad at a little mistake but f*ck, not my coffee.”

“Being on hold with customer service for over an hour and then getting hung up on.”

“Feeling good about yourself and then walking past a shop window or something and catching a glimpse of your own reflection.

“Getting a flat tire.

If you know what you’re doing you can have it fixed and be in your way in 10 minutes, but now your day is ruined, your mood sucks, and you’re going to probably have to pay for a new tire.”

“For me, it’s my wife talking about planning things before my 1st cup of coffee.”

“Hearing rumors/ lies about yourself.

“Repetitively getting cut off talked over mid-sentence when discussing things in the work place.

I’m speaking because I believe I have something to add. Being talked over repetively then, having folks do it on purpose after they realize it’s my tick completely deflates me.

It enforces the notion of not being valuable to the team, and I shut up.”

“Not being able to sleep the night before.

Spilling coffee on yourself right after you get dressed.

Cat puked on the carpet.

You open a weird book and unleash a demon older than the world, and the cafeteria is out of a lot of stuff.”

In the comments, tell us about the small things that can ruin your whole day.