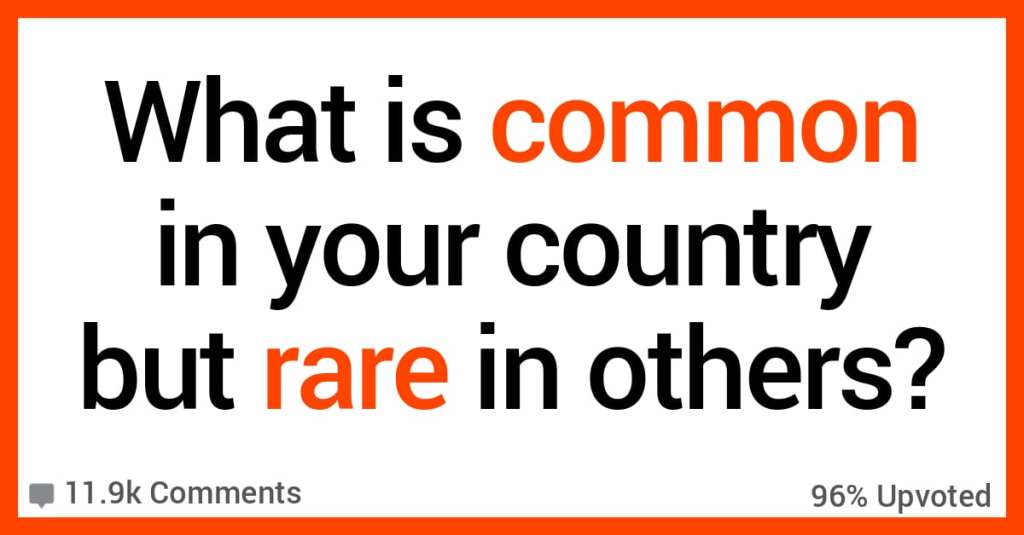 Traveling is one of the greatest joys in life. One of my favorite things is sitting at an outdoor cafe in another country, enjoying a cup of coffee or a beer, and having absolutely no idea what anyone around me is talking about because they’re speaking another language.

Some people might find that intimidating or uncomfortable, but it gives me a sense of freedom not having to pay attention to what people are saying. I don’t know, maybe I’m weird…

Of course, we can’t really go anywhere right now, but once things are back to semi-normal, I know I’m looking forward to hopping on a plane and experiencing another country because it’s been quite a while.

Because it’s great to be exposed to different customs and cultures.

Here’s what AskReddit users had to say about things that are common in their countries but not in other places around the world.

Godd*mn are you guys missing out on poutine.

Seriously unhealthy, but also good for the soul, so is it really unhealthy? Yes. Yes it is. But you’re still missing out.

For those wondering, it’s fries topped with gravy and cheese curds.”

“Small kitchenette in apartments, there is a huge culture of eating out for every meal. People rarely cook (its more of a hobby).

Food outside is fresh and cheap.”

More waking time spent without electricity than with it.”

“Driving literally 10 minutes to the next town and not being able to understand a word anyone is saying.

“In Colombia, hot chocolate is served with slices of salted cheese in it.”

“Everyone rides bicycles on specific bike lanes. Not unique, but certainly not common.

The Netherlands has more bicycles than citizens, everyone owns 1.3 bike. Literally on almost every road on which riding a bike is allowed there are special lanes.

In big cities it is way easier to transport yourself with a bike than in a car, mainly because it is arranged so perfect.”

“In Finland: Most people have their own sauna.

When you get to 6th grade u have to start learning Swedish only because 10% of Finnish people speak Swedish as their normal language.”

Horse meat is part of almost every national meal.

“Being polite to strangers.

I’m an American and it’s almost second nature to say hello to someone as you pass them on the sidewalk.

I’ve been to multiple Asian and European countries and you just dont see it. I did it in Berlin and France and people just looked at me funny, that’s when I learned…”

“Setting up Christmas Decors when it’s late October and keeping them up until next August.

“India is undoubtedly one of the most interesting countries in the world.

According to the Hindu calendar, there are 6 seasons in India: summer, autumn, winter, spring, the monsoon season, and the winter’s eve season.

Vegetarianism is one of the traditional features of Hinduism, and that’s why almost 60% of Indians are vegetarians. India also has the lowest percentage of meat consumption per capita.

There are 2 official languages in India: Hindi and English. What is more, the government accepts 17 other languages. There are 1,650 dialects found across the country.

Although 80% of Indians are Hinduism adherents, the country includes all the world’s religions. You can meet followers of Christianity, Judaism, Buddhism, Jainism, Sikhism, and other religions there.

Indian police officers are given bonus payments if they have a mustache. This idea is argued that mustaches make men more reputable and manful. Moreover, it’s an essential feature of Indian folklore.

Foreigners are prohibited to take the local currency (rupees) with them when they leave India.

In West Bengal, an Indian state, each cow should have an ID card with photo on it.

At present, India’s population is approaching the 1.5 billion mark. It’s higher than anywhere else in the entire Western Hemisphere. According to the UN, India will soon be able to outrun China.

Only 1 marriage out of 100 ends in divorce in India. It’s one of the lowest divorce rates in the world.

Indian farmers use Coca-Cola and Pepsi instead of expensive pesticides.

“A scarecrow meant to be Judas is made every Good Friday, which is beat by children and adults using sticks and bats until it falls apart.

Oh, and we have people who sell Coconut water near major roads.”

14. You need those screens.

“Screens in your windows.

I didn’t know that wasn’t a thing all over the world until I commented on a post here in reddit.

There was a post showing a person with a personal bug net around their bed to keep the bugs out. I was like “wait why don’t you guys have window screens to prevent bugs getting in your house in the first place”

Apparently a ton of people don’t? I never knew that, thought it was interesting

Mosquitos, black flies, and horse and moose flies here in Maine are super bad during the summer, I can’t imagine somewhere like the tropics.”

In the comments, tell us about things that are common in your country but rare in other nations.