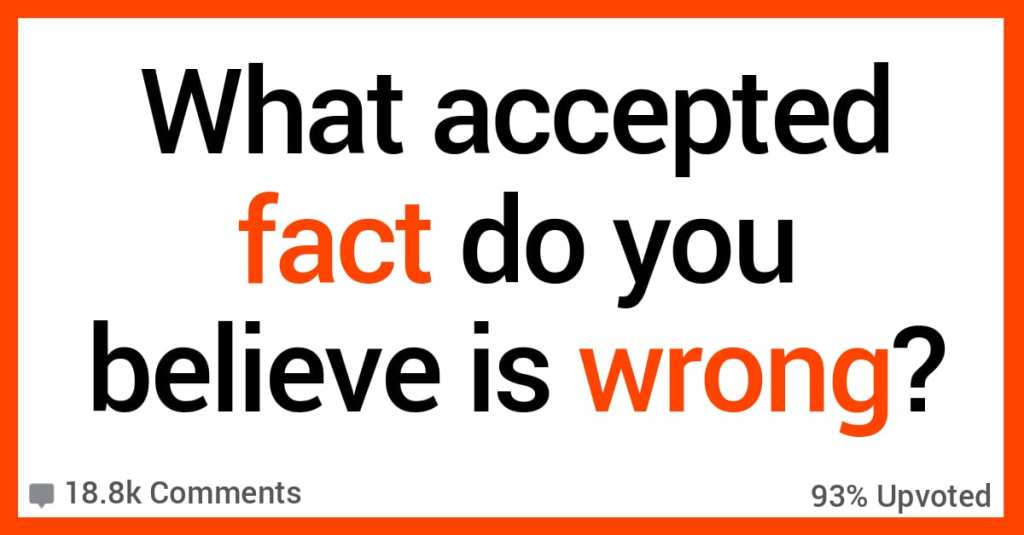 People Discuss Widely Accepted Facts That They Think Are Wrong

I have to admit, the war on facts and the war on science that we’re currently witnessing scares the hell out of me.

I’m all for people having their own opinions about every matter under the sun, but when you blindly reject facts that are right in front of your face, there are bound to be a lot of problems.

And when MILLIONS of people do this, we could potentially be in HUGE trouble.

But people believe what they want to believe.

Let’s take a look at what folks on AskReddit had to say about “facts” that they believe are wrong.

“Cutting your hair makes it grow faster or thicker.

It can’t communicate to your body you need more hair, because a loss was suffered. Your body naturally changes with time.”

“That my political party is full of only the good people trying to do the good things for the people.

And your political party is full of only the bad people trying to do the bad things to take advantage of the people.”

“Transatlantic Slavery did NOT start in 1619!!!

It started at LEAST as early as 1527. In 1527 the Narvaez expedition from Spain left for the Gulf of Mexico. A hurricane (or bad storm) later all but 3 sailors and a slave were either killed or separated.

One of the sailors survived, made it back to Spanish settlements, and wrote a letter to the King detailing this (including the adventures of the enslaved man Esteban).

There’s also speculation that Columbus had African slaves with him in 1492 but placing it in the 1600s misses a LOT of important historical events that impacted the trajectory of the world.”

“Thomas Edison did not actually invent the lightbulb.

He just made a version that was inexpensive and more practical.

The original lightbulb was made using the contributions of many inventors such as Alessandro Volta, Humphrey Davy, Warren De La Rue and Joseph Swan.

The main reason why Edison’s version was so successful was because he was already known and he owned a large company.”

It’s a one liner people use to sum up his accomplishment. What his voyage did do is start the Atlantic Exchange, which was a massive shifting of goods, culture, and people between Asia, Africa, Europe and Africa.

His “discovery” had a major impact on culinary cultures on all these continents, triggered the Spanish golden age, and led to huge demographics in the Americas, and Africa. That not even looking at the deep impact of trade.

For some context the primary current used in China during the early 20th century was still the Spanish Silver Peso.”

“Carrots are good for your eyes.

Amyth created by the British propaganda during World War Two to explain why the Royal Air Force could shoot down the German luftewaffe so easily when they had in fact created radar.”

“Sugar does not make you hyper. There is no such thing as a “sugar high.”

Kids going bonkers after having a big slice of cake can be explained very easily: They’re in a situation where they’re already excited (like a birthday party), they’re overjoyed because they just got to eat a big slice of cake, and/or you’ve told them they’ll go crazy if they eat all that cake and now it’s just a self-fulfilling prophecy.

And no, don’t tell me I just haven’t met your kids.”

8. They don’t understand that part.

“The U.S didn’t lose the Vietnam war because the Vietcong was able to hold back the U.S military.

The U.S lost the war because the war was unpopular back home and there was a lot of pressure for the military to pull out.

The U.S military was actually very successful in its military campaign.

It was only until the U.S pulled out that the North was able to invade the South.

So many people don’t understand that part.”

“A third world country means it is a poor undeveloped country.

“The British have worse teeth than Americans.

Brits have fewer missing teeth on average, and the DMFT index is 0.8 for Brits but higher at 1.2 for the United States.

“No one is ‘gluten intolerant’.

You either have celiac disease, or you don’t. If you have it, then your body has great difficulty processing the protein found in gluten, which can cause inflammation, diarrhea, and for women even miscarriages. Or you don’t have it, and your body can break down the protein without issue.

The fact you stopped eating empty carbs and feel better, is not proof you have a disease. And please, in the name of all that is good, if you think you have it, go see an actual doctor.

It’s not something you can self diagnosis.”

“Everything you know about Attila the Hun.

Attila the Hun was actually a super honorable, extremely well educated guy who spoke multiple languages, was said to be a child genius who excelled at war strategies, and as a leader always put his people first.

He was known to go without status symbols and such because he believed that as a leader every one of his people should have them first, because it was his job to take care of them. He also spent a lot of his formative years in Rome in a sort of prince exchange created to make sure everyone got along.

When the Roman Empire was falling, the Pope himself came to him and begged him to leave them alone. The Pope said that the empire would fall if he didn’t. Attila wasn’t Christian, and was definitely winning the war with way less men and resources because he was so intelligent.

Even still he felt badly for them and recognized how big a deal it was for the Romans to send the Pope, so he agreed to end the war. He could have easily killed the Pope and continued to destroy the Roman Empire, but he was far too honorable and kind hearted.

But we only hear the Roman Propaganda…

Attila is and will always be one of the most amazing leaders in history!”

Nutrition in general has been destroyed by the sugar company. Coincidentally, all 3 of those things are actually caused by the sugar, Fructose. Sugar causes your endocrine system to store fat on your lower stomach and on your organs (causes NAFLD)

Sugar is the cause for hypertension, not salt. Salt is only a problem in the absence of potassium (and you get lots of potassium)

Saturated fat is actually the most easily digested fat you can take in, and it doesn’t go directly to your thighs. It first gets stripped down and repurposed into your glycogen and then adipose tissue (if you don’t use the calories)

Calories are fine so long as they don’t come from sugar. I mean, after a HUGE calorie surplus, your body will eventually begin accumulating large enough amounts of adipose tissue and you will become fat. But sugar causes insulin resistance which makes it difficult to digest more sugar and then the extra sugar begins a whole vicious cycle of just being stored directly as fat.

Please eat more salt, your body needs it and your kidneys EASILY remove extra. (it’s osmotic, your kidneys don’t “work” to remove salt, they do however need to work to keep more water in when you’re low in salt)

More importantly, lift weights. Your body has a tissue hierarchy, it will always dispense with fat before muscle. So build muscles. Ladies, you will never be “muscular” without taking hormones, so don’t worry about it. And if you would become too muscular, then just continue with lighter weights until your muscles atrophy back to normal.”

“That two blue eye people can’t have a brown eyed kid. They can.

But it comes down to recessive blue Gene. Too complicated to go into it. But seeing the charts that are like 1+1 brown will make a 50/50 chance of blue or brown eye baby. 2 blues will only make a blue or a green etc.

In the comments, tell us the “facts” that you believe are dead wrong.