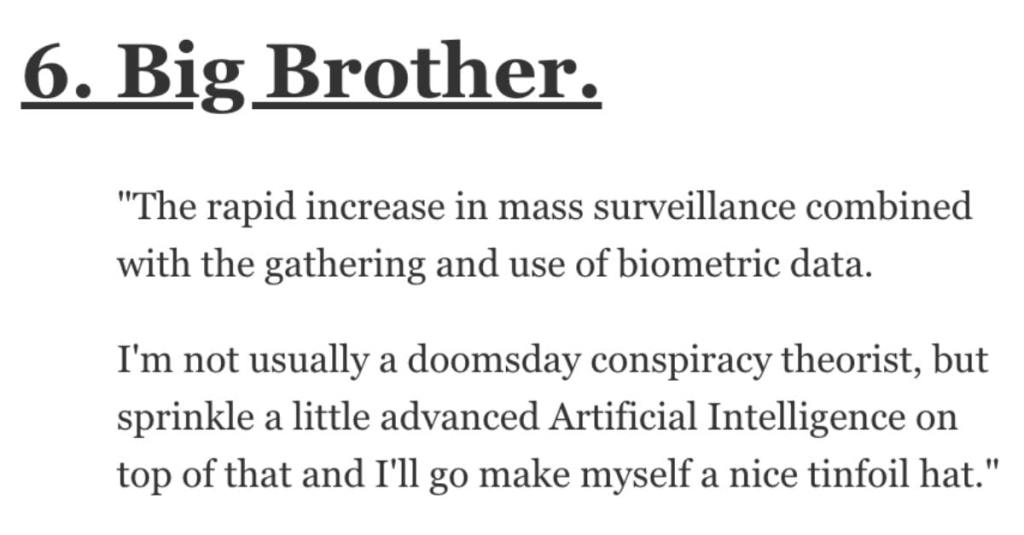 People Get Real About “Normal” Things That Actually Scare Them

“If that’s what they call normal then I’d rather be insane.”

Those lyrics by one of my favorite bands of all time, Operation Ivy, have always stuck in my head from when I was in high school.

I think it’s because they’re so TRUE.

When I look around, I see a whole lot of things that people just accept as “normal” that are actually pretty scary. And I have a feeling I’m not alone…

AskReddit users sounded off about this.

“Being exploited at work.

Not using their full PTO

We are humans. We are better than this.”

2. Not good for your brain.

“Having the news on all day long.

My dad tells me he “watches news to relax after a hard day at work”. I can’t even understand how that works.”

“People love to say “You are in control of your life”…but when you are being bullied, people say “just ignore it and it will go away”.

Now you are relying on the bullies to get bored with you, which may take years.”

“Saying no or telling someone I don’t want to do something, setting boundaries. Stuff like that is hard to do.

I keep thinking of how I’m disappointing the person, hurting their feelings, or making them angry.”

So often, I see adolescents struggling with depression or other mental health concerns, only for them to be brushed off as ‘mood swings’ or ‘teenage angst’.

Nobody wants to take action for those kids until it’s too late, and I wish that would change.”

“The rapid increase in mass surveillance combined with the gathering and use of biometric data.

I’m not usually a doomsday conspiracy theorist, but sprinkle a little advanced Artificial Intelligence on top of that and I’ll go make myself a nice tinfoil hat.”

“That you should have a career/future planned out for yourself before you finish high school.

Why do people do this?

As if people don’t change as they grow, and that your ambition stay the same.

You expect teens to decide what they’re gonna do with their lives before they can even drive?”

“The fact that most of the current generation of working people in this country won’t be able to have their own homes.

I know a couple that will finally have paid off their home AFTER retirement.

It’s a real shame, and it’s not in America either this is a worldwide issue for some reason, Europeans and the Japanese have it just as bad.”

“Not caring about doing the right thing, or the well-being of other people.

The scariest thing to me is knowing how many people out there either don’t have empathy or consider it weakness.

You start noticing as a kid that some people are absolutely heartless about pets or frame everyone’s misery as ‘not their problem’.

“The amount of plastic in everyone’s homes in the form of temporary food packaging.

It doesn’t seem like much until you pay attention to it, and then think about how much of it you alone are guilty of discarding.

This stuff is literally everywhere, even in the lowest parts of our oceans.”

“That being in Debt is normal.

So many people just keep digging that hole with some amorphous thought that they will pay it all back eventually, even if they know deep down that it just won’t happen.”

“Posting pictures of your kids online.

I’m glad I grew up largely before the internet was commonplace. I don’t like having pictures of me on social media as an adult, much less having some from my childhood that I didn’t have understanding to reject to.

There are very few pictures of me online, and if any do get posted I ask to be blotted out of them before upload.”

“Giving a scientist and a crank equal credibility in news debates, as if scientific consensus [vs pseudoscience/non-science] is something to be debated.

People ‘denying’ or not believing in science, as though its a set of ideologies you can choose to align with rather than simple observation of cause and effect.”

“Dying lingering, painful deaths that last for weeks, months, or even years because we’re afraid of death and anti-euthanasia.

If other people want to die naturally, that’s up to them and they’ve got every right to do so, but if I am one day facing a long, painful death, I want to be peacefully and painlessly killed via euthanasia, and I should have the right to do so without risking the doctor performing the procedure going to jail.

To be clear, I do not want to die via euthanasia either. The ideal way of going would be peacefully in my sleep, or alternatively, some kind of instant death via explosion or whatever.

I would prefer to die without artificial means to either end or prolong my life. But euthanasia should be available as an option (not a requirement) for those who want it and are facing terminal illness.”

What do you think is scary that most folks view as normal?