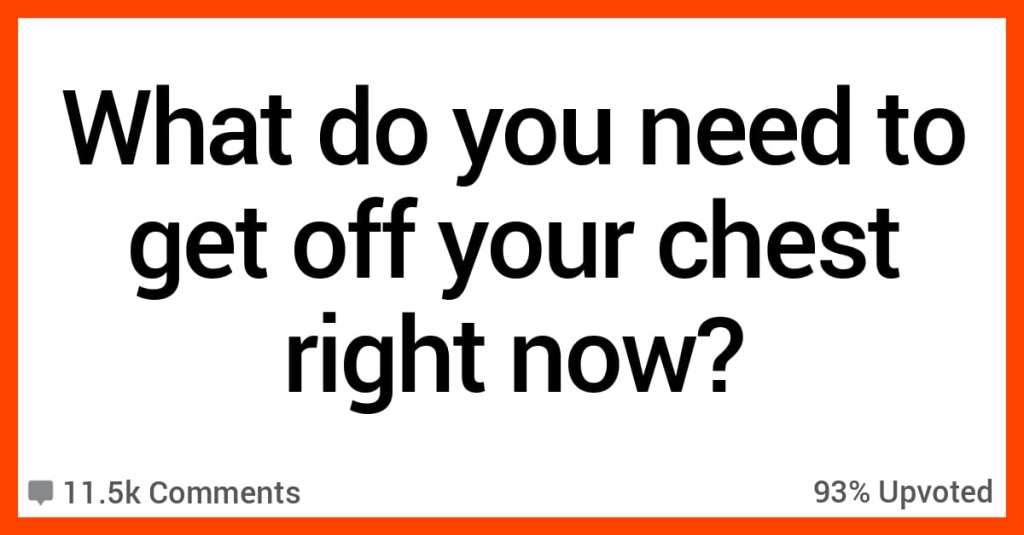 Life is hard. And keeping things all bottled up inside just makes things even harder, if we’re being honest about it.

Whether you realize it or not, when you hold on to things that you really want or need to get out, you’re just adding more stress to your life.

So that’s why sometimes you just have to let it all out, even if it’s to complete strangers on the Internet.

AskReddit users got real about what they need to get off their chest.

1. Take the time for yourself.

“My wife passed away recently and today is our anniversary.

I’ve told people not to bother me today because I want to look at pictures, listen to music we both enjoyed, and get drunk. One of her friends has called me 7 times today and I got really short with her at call #2.

I turned my phone off. Some people just don’t get it. I’m not suicidal, I’m not depressed, I just want to have a private day with the memories of my beautiful lady.”

“I lost 60 pounds so far but I’ve been spiraling the past month with bad eating choices and not exercising anymore.

I’m terrified of gaining all the weight back but I feel so drained and lifeless lately.

I need to do whatever I can to muster up the will to keep losing weight.”

“I’m so tired all the time. I’m sad and stressed, and I think I made too many mistakes in my career path.

I don’t know what I want to do, but it’s not what I’ve done or what I’m doing. My self esteem has taken a complete dive.

“Lately, most days I run on autopilot.

The only thing that keeps me going is the idea that if I were to die, my wife would be in shambles. Not to say that she can’t provide for herself, she’s totally capable of that. But if I were gone, then she’d be an absolute mess and unable to care for herself.

I’m so worn out that I don’t look forward to waking up every day. I don’t like letting others see me be weak, so I try to maintain a facade of resiliency. Gotta be a pillar of support for those who need it more than I do.”

“I just started my bachelors degree, and Im really exicited about it. I feel like im in the right place. Thing is… I miss my father so much these days, more than usual.

We had a lot of common interests in the field im studing, and even though im surrounded by people who are just as passioned about this as me, its really not the same. I miss his enthusiasm, our discussions and just him as a supporting father.

“My estranged mother has sent me emails that she is going to kill herself on my birthday and that I don’t love her.

I can’t keep contact with her because I don’t have the capacity to handle her mental illness and don’t want to fear if she will try to strangle me again. It still hurts to read those emails because I gave up so much to take care of her and my little sister.”

I know I’m wasting my life but I just don’t know how to change it, honestly I wish I just didn’t exist.”

“I hate my job. I hate my profession.

I don’t want to do it anymore but I owe so much in loans I can’t escape.

I’ve considered faking my death and leaving the country just to get away from it.”

“I’m finally starting to recall various traumatic incidents from my childhood, which I had repressed for years apparently, and am TERRIFIED to start EMDR therapy because I don’t want to relive those moments.”

“Last night it occurred to me that I can’t remember the last time I felt safe, hopeful or happy.

I have lost so much since COVID, and any energy that wasn’t spent on grief and anxiety, has been spent on frantic efforts to avoid getting sick (and thus risking the very few people / things I have left).”

“I feel so lethargic lately when it comes to anything that needs effort.

In the pandemic, my old school where I was really happy shut down, and I moved to another school mid term, so I have like 20 different things to catch up on. I just turn of the mic when in class and space out. I’m just letting the schoolwork pile up and waiting for my impending doom.

I don’t want to disappoint both my parents, but I just feel like sh*t lately, and comic books and the internet are my only salvation.”

“Nobody I ever meet is someone I would consider dating, but I still want the intimacy that comes with dating.

On top of that, I f*cking hate when people start talking about their s*x lives in front of me because I’ve not been on a date in nearly two years, let alone had anything exciting happen.

It’s that feeling of missing out on a whole slice of life that I don’t seem to be able to get hold of.”

“I have no idea what I want to do with my life.

I’m so afraid to go to college, and get a job. I’m afraid I won’t be successful, and I will still live with my mom when I’m 23.

All I could do was watch as she slowly became more and more distant and eventually left after a 2 year relationship.

It’s been 4 months no contact and a year since the breakup but it still hurts like hell.”

“I feel like a failure. My 3 year relationship just ended a week ago.

It hurts a lot because it was my first relationship and knowing I made a mistake that caused the relationship to fall makes it so much worst. I tried everything I could to fix the relationship, destroyed myself by pretending to be okay with stuff I wasn’t okay with just to make sure he was happy, but my ex decided that it would be the best for us.

He had a valid point as to why it was best for us but I still can’t help feel like everything was my fault and that I failed trying to fix my mistakes. They said to not be too hard on myself but I can’t help it.

I can’t help but hate myself because I lost someone I didn’t want to.”

What do you really need to get off your chest right now?

Talk to us in the comments if you need to blow off some steam!