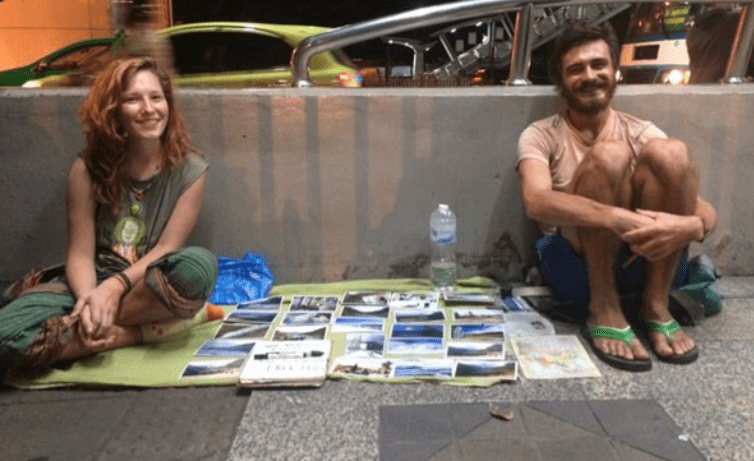 Man, this is really annoying. Like, infuriating. The nerve of some people is enough to make your blood boil.

For some reason, there’s a trend in Asian countries of Western backpackers asking the locals for money to help finance their travels. There’s nothing like asking someone who has to go to work every day to give you some cash so YOU don’t have to work, right?

Obviously, the locals in these places are not fans of these folks, and I don’t blame them one bit. Let’s take a look, shall we?

1. Especially insulting in a working-class neighborhood

In a very working class neighbourhood that has been especially hard hit by the typhoon how you have the nerve to beg for money to fund your travels around Asia is completely beyond me. Your new clothes and new shoes, begging for money in a wet market as people around you try to rebuild their shops and lives. I've always hated #begpackers but this if fucking infuriating #typhoonmangkhut

Just f*ck off already! Yet another begging white #begpacker scumbag in Seoul's Jongno 3-ga, as usual in front of elderly and poor people who cannot comprehend how the mighty white man is in need, so share their pennies.

Beg packers – tourists who travel with the intent to beg for money from the locals to fund further travel. Peep the sign, too from ChoosingBeggars

The defiant sniggering face on this shameless #begpacker's face when I report her to police here in Seoul's Jongno 3-ga. She obviously pretended not to speak a word of English. Such an old trick. And then police don't know what to do. Calling immigration would be a good start. pic.twitter.com/ilOjxHrRsk

Just heard about this and I don't get it. Westerners are traveling around Asia on a shoe string budget and begging for money to fund their trip.? A fellow Malaysian pointed this out and I'm really baffled why this is even happening. Is this really happening or some sort of prank??? So, you're from a developed country traveling to a 3rd world country begging for money? ? Why not get a job and save up for your doggone trip like everyone else? Don't give the rest of us in the developed country this image.? Am I wrong to think this entitlement issue is getting way out of hand??? What do you think?? . . #Entitlement #Millenial #travelling #freeloader #begpackers #norespect #respect #backpacking #digitalnomad #nomad #travel #travelasia #bethechange

white people who galavant throughout asia w/o needing a visa and then beg for money on the street don't deserve rights pic.twitter.com/mjL9GK2tOg

I read an article about #begpackers and came across these white dudes along the streets of Tsim Sha Tsui in Hong Kong. They literally would create such a gimmick of putting blind folds and offer "Free Hugs" with a donation box asking for help to fund their travels. We can clearly see how privileged these guys are because a lot of Asian girls got so giddy about them to the point that one of them wept with joy while being bear-hugged by one of them. Welp, I guess this is becoming a trend now… #TravelBeggar #traveller #whitesupremacy #travelabroad #travelphotography #travelexperience #WhenInHongKong #HongKongTravels #AsianTravels

진짜 가난한 할배 vs 가짜 거지 #베그패커 More disgraceful #begpackers, lining the streets of Jongno, Seoul. In front of a grandfather picking trash to make a living. Poor Artem is desperate for your money to travel, again. He was here last week. pic.twitter.com/4c8StdyZfB

11. Traveling is a choice

Yesterday I saw these blindfolded travellers asking for money in one of the most transited areas of the shopping district of Kuala Lumpur, and I have strong feelings about it. Travelling is a choice, and not only a choice but a luxurious one. When you choose to travel, to leave your confort zone and explore the world you might feel yourself as an adventurer, and you might be one, you are one among your group of privileged people. If you can actively decide to leave everything behind, take a backpack and wonder the world, it is because you have a social structure that allows you to do it. You do it because most likely your family does not need your work force to be sustained, you do it because even after months or years of travel, you can go back to a safe place were your "struggles" as a backpacker will only be a nice memory of the times when you decided to get out of your confort zone and "live". I have no troubles with the people that decide to travel and perform an art, entertain people, and from that keep travelling, or finding a part time job in different places to keep going, as long as it is legal. When I was living in Oxford I had a licence to perform in the streets and I was registered as a legal busker as a side activity. I have also performed in bars and hostels in exchange of a beer or an extra free night. I have done hardcore backpacking myself, and if it wasn't for the dozens of people that have let me stayed with them or that have helped me in other ways, I wouldn't have been able to live as many experiences. But I have never pretended that people should give me free money to keep travelling, to keep doing what the majority of the people in this planet will never be able to do, not because they don't want to but because they can't. I have always had enough to sustain myself, I plan and save for years for my travels. Continue reading on the next post. —> #begpacker #backpacker #travelling #qleveryday #BukitBintang #KualaLumpur #Malaysia #Asia

Begpackers spotted in Hoi An from VietNam

14. They look pretty happy to me