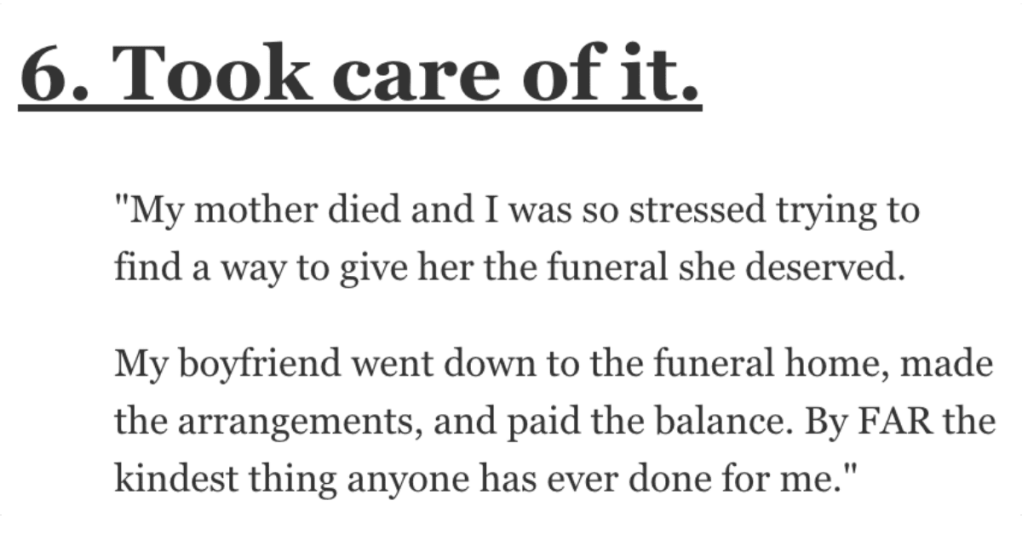 I don’t know about you, but I’m ready for positivity right about now.

Let’s focus on the good stuff in life!

AskReddit users talked about the nicest thing that someone ever did for them.

And we hope it inspires you to do something nice for someone very soon.

“One of my highschool bullies invited me to his house to hangout for a day, I was really nervous it might just be to screw with me, but I was desperate for some sort of friendship so I went over.

We’re now best friends and he and his family feels like family to me and I have no idea how we ever disliked each other.”

“I went to a local breakfast spot after a rough night. Totally forgot my wallet so I left my phone as collateral and went to my house.

Came back and some guy had already paid for me. I know it doesn’t seem that big of a deal but it was a pretty bleak week for me so it meant a lot.”

“A few years ago I was gooing down to visit my grandmother in South Carolina. I needed an inspection and oil change and was a single mom of a 5 year old.

The total ended up being 40 dollars more than i thought. At the time that was devastating and I had to tell my daughter in the parking lot we couldn’t go see her grandmother anymore. Someone heard me talking to her and came over to us and gave us 60 dollars.

That was one of the nicest things someone I dont know has done for me.”

“Me and a woman were about to get on line for to go drinks at the same time, so I let her go first. We chatted for a minute, she got her drinks and left.

When I go to get my drink, I found out that she paid for it! I’m not working at the moment, so it really made my day.”

“When I was about 13, the pastor of our family church heard me practicing Chopin on the piano.

Knowing my parents couldn’t afford it, he offered to pay for my music studies (organ, piano, music theory and ear training) so that I’d be prepared to enter music conservatory after high school.

All he asked for in return was that I’d help out with the church’s music program when needed (which, in itself, proved to be a wonderful learning experience).

This kind, generous man spent thousands of his own money to help me along the way to a rewarding career in music.”

“My mother died and I was so stressed trying to find a way to give her the funeral she deserved.

My boyfriend went down to the funeral home, made the arrangements, and paid the balance.

By FAR the kindest thing anyone has ever done for me.”

“I’ve never been able to celebrate my birthday, between my sh*tty mom and awful relationships.

It’s just become a tradition to lay in bed and cry every year. Well this year, my best friend and bf put their heads together and threw me a surprise “party”.

Decorated our apartment, baked me a cake and decorated it to the best of their abilities, and got me some small, well thought out presents. 24yrs old and finally had my first good birthday, I cried like a baby.”

“I am currently one of the evacuated people in California due to the fires.

One of my friends in letting me, my wife plus our 3 pets stay with them for as long as we need while we wait to see if our house will burn down or not. While not the nicest thing, it certainly is one of the most genuine and caring things someone has done for me.

“I was involved in a hit and run on my bicycle in Chicago.

I broke my collar bone (first broken bone) and a stranger drove me to the ER. I was going into shock and freaking out about finances (I’m a single mother and 2020 is the worst year.)

The stranger gave me her number for the police report and such, and later sent me $5k because she knows what it’s like to be a single mother with nothing. I sobbed.

I hadn’t gotten my unemployment yet and still haven’t gotten a stimulus check. I was overwhelmed by her kindness and I will never forget it.”

“When my parents were awful, and my sister was passing away, my friend’s parents took me in for a while but they did it in a way that seemed like a sleepover (for a few months).

I didn’t realize until I was an adult how much they stepped up for me.”

“My brother took me in when I couldn’t live with my parents anymore.

He helped me sober up, deal with my depression and change my lifestyle.”

“I was walking through the streets of Marrakech after it had just rained.

I was wearing those flimsy flip flops so all the wet sand from the street was being catapulted onto the back of my legs. Out of nowhere, I feel a tap on my arm. It’s a young Moroccan girl, not older than 6-7, offering me her water bottle to clean my legs.

I politely declined because I could never accept to take someone’s water in that scorching heat, but thanked her and her mother profusely. Children are so pure.”

“It was late at night and I decided to surprise a girl I was talking to by heading to her apartment (my now exgirlfriend). It was around 10:30, and unbeknownst to me, the subway stopped running at 11:00. Unfortunately, I was halfway there and I decided to message her and she told me to take a specific bus to get to her city.

I get on the bus, and I don’t have the slightest idea on what stop I should be getting off on. Well, about 10 minutes later, a load of people get off on this one stop. An older Korean businessman sees me and motions to me that there’s an available seat next to him. He starts talking to me in English and he says that the stop where I’m getting off is one stop before he gets off,and that he’ll let me know when.

We start conversation about where he works, how he learned English, what I’m doing in Korea. By the time we knew it, his stop came up. He profusely apologized to me and said that it was the stop before.

I said,”It’s okay, I’ll just walk the opposite direction.” As we get off the bus, we’re both walking in the same direction. As we come up to an intersection, he flags down a taxi, tells him the subway station to drop me off on, and he paid the fare. All this while still apologizing to me.”

What’s the nicest thing a person ever did for you?