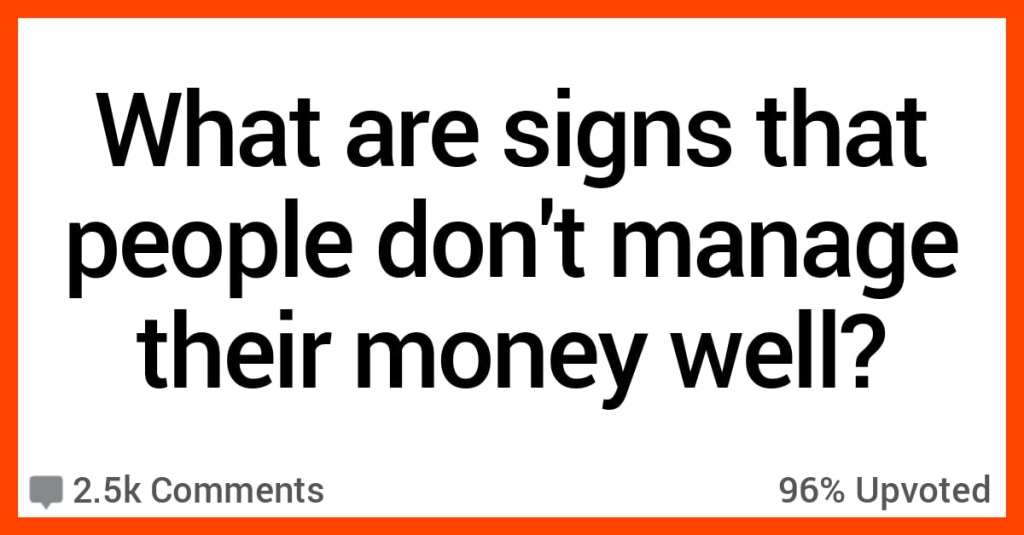 Sometimes I lay in bed at night and I design my dream house in my head.

A big front porch. A nice patio out back. A spacious living room with a big TV.

And, of course, the large room that is only a trampoline and the flying trapezes in the backyard. That’s practical, right?

What screams “I don’t know how to manage my money”?

1. What are your priorities?

“When someone always has their hair and nails done plus money for new clothes, but is always complaining that they’re too broke for groceries.”

“Unopened boxes all over the house. Crazy stuff in odd places.

An example. I knew this rich guy and I walked in his front room and there was a huge portable sauna just sitting there, not functional.

He bought it at an auction 6 months before cause he wanted to impress his fellow churchgoers.”

“Bought a $2,500 Rottweiler puppy. No money for vaccines, des**ing or registration.

Now she’s got parvo, and you’re screaming down the phone at the local animal control who picked her up wandering and sick, impounded her, and want you to pay the impounding fee and get her medical care before they’ll release her back to you.

They’ve even offered to waive the impounding fee if your vet confirms they’ve seen and treated her, but no, don’t they understand you don’t have money for that kind of thing, and you’re going to go to the media about how they’re extorting you, and sue them for the cost of the puppy?”

I’m self employed. At that point in time I was barely making enough to cover my bills. About $3.50/hr. Working 11 hour shifts. I had saved every penny for seven years to get the home I was living in. Bought my own car and was paying my loan every month. I took care of all my expenses.

She worked at a high end company. Made $22/hr and her job had an on-site gym, Doctor’s office, great benefits and free health insurance. She was living with her parents for free, had zero bills to pay. Yet she was always broke. And it was somehow my fault, for having it “so much easier.”

Yet I saw her many times on payday, she’d go out and spend $200 on books, $300 on merch from her favorite show, throw money away on fast food every day and gas to drive her and her friends around all day.

Years later now she’s still always broke, now in debt, living off her family and boyfriend and his family.”

I once met an entire family who insisted on wearing only white. I taught English to their son at a private school in China. They put really expensive imported brands, all white, on their 6 year old so he could go play on the floor and spill food on it.

Honestly I don’t know how some people survive, let alone get rich, being that dumb.”

“Blowing paycheck after paycheck on designer brand clothes with a perpetually empty pantry and refrigerator.”

The landlords in my building are actually like this. It’s a husband and wife (maybe 40ish) and one adult daughter and one teen child. The women have day jobs and the husband does maintenance here. I assume they’re live rent free, and maybe get paid something on top of that.

They have 3 brand new fancy cars. And they get replaced about once a year or so. I presume they’re leasing and getting new ones every time each lease is up. Right now there’s a Charger, Raptor, and some kind of Lexus. There have been at least a dozen prior cars in the few years they’ve been here.

They’re nice people and manage the building well. But man they must be blowing so much money on all these cars.”

“A person having an expensive membership in a pricey country club, even as their car is being repossessed.”

“I think a classic example is a beautiful home in a nice neighborhood, but it’s not kept up and looks tacky compared to everyone else’s.

They bought the fancy house, but they can’t manage their money well enough to take care of it.”

Please save time and money by making coffee at home.

While in the line at Starbucks you could have already had good coffee.”

“In Australia (and super common in the suburb I live in) when you drive a range rover but your kid catches a bus to the local public high school.

Or when your kid has to claim free breakfast every morning but you’ve got the tell tale cling wrap around your new leg tattoo.”

“The car is usually a dead giveaway.

There’s very little justification for having a brand new, upper midrange car. They’re super expensive, and lose a ton of value, literally the moment you get behind the wheel.

How do you think you can tell that people can’t manage their money?