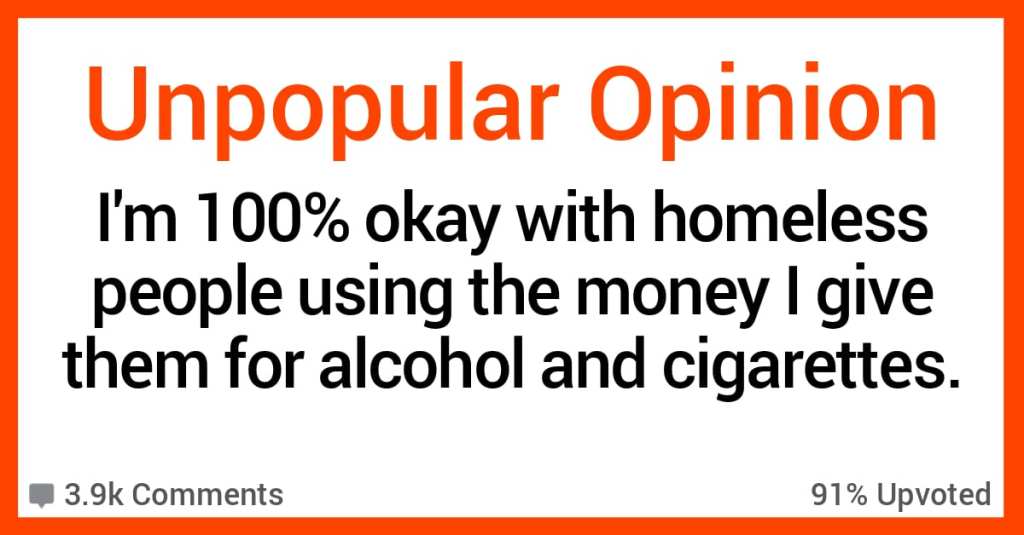 People Share Opinions About the Statement “I’m Fine With Homeless People Using My Money for Booze and Smokes.”

I know people are probably going to give me a hard time about this, but when I give change or a few bucks to a homeless person, I honestly don’t care if they use it to buy alcohol, cigarettes, or even drugs.

Most of these folks are just trying to make it through the day and survive and they want to have some relief and have a drink or use another substance, that’s their business and they gotta do what they gotta do.

And I guess I’m not the only person who feels this way because someone took to Reddit to share their thoughts on this matter.

I’m 100% OK with homeless people using my money for booze and cigarettes. from unpopularopinion

People shared their thoughts about this divisive subject on Reddit.

“Many homeless people just want to stay warm. Many have horrible mental illnesses that drinking helps them not feel so much.

Many are physically dependent on alcohol because of this and will die in withdrawal unassisted. I do the same thing every once in a while, especially if they’re honest like that.

Everything is not black and white with homeless people and their drug use, you did the right thing in my opinion.”

“Isn’t it funny how other people get mad because of what you chose to do with your money? You buy a guy some booze for like $5 because he can’t afford it, and people flip out

But you bring extra booze for the party and they act like you’re a hero. Either way you’re giving away free booze, they just think they’re more deserving of it.”

3. No money…just the other stuff.

“I have never once in my life given money to homeless people. I have however purchased a few tall boys for some local homeless guys.

Also, growing up there was a homeless guy named Jeffrey that lived in the alley behind my moms work. He was awesome. He would make sure the alley was always tip top shape. Make sure everyone’s trash was in trash cans, alley was swept and would basically just make sure the alley looked as good as an alley could look.

He loved bean and cheese burritos so we’d always buy him burritos from the Mexican restaurant next door. They restaurant knew him and what he did so we’d be like “Hey, Jeffrey cleaned around our trash bin today so can you give him a burrito and a water, and I’ll pay now?”

So then we’d pay for it and the guys would take it right out back and give it to Jeffrey.”

“When I was in high school a homeless man asked me for money on my way into a convenience store and I said no, but bought him a sandwich and gave it to him on my way out.

Realized I’d left my wallet at the store a few minutes later (don’t worry, I’d left it on the counter and everything was accounted for when I retrieved it), and when I went back to get it I noticed the sandwich sitting in the trash can outside the door.

He literally threw it away. Haven’t bought food for a homeless person since, cash only.”

“Sometimes when I’ve had a bad day, I just want a drink.

I could only imagine what I would want if I was in their shoes. I’m on side with this opinion.”

“I just can’t help but feel that while I am making them feel better in the short term, it can only hurt their chances of getting off the street and possibly hurt their health as well.

By no means do I think it is simple or easy to be in that situation, though.”

“I know what you’re trying to say and in principle I agree with you but I still feel very uncomfortable with the fact that my money would be used in such a destructive way. What bothers me is not the “waste” aspect of it but rather the destructive part.

For example I have absolutely no problem with the idea of buying a homeless guy a movie ticket. Most people will probably say: “that’s crazy, that’s such a waste of money, just buy him essential stuff he truly needs” but I disagree. I believe we all need fun, entertainment, happiness.

A loaf of bread and a bottle of water will get you through the day biologically but not psychologically. You need an opportunity to enjoy life… everyone deserves that.

So, in that sense I 100% agree with you. I just don’t want the fun/happiness I provide to a person to be such a destructive thing.”

“Life is just a series of events, and if those events lead you to a situation like that, then I’d want to have a bottle in my hand till the day I day.

Weed/alcohol/nicotine would be th LEAST of my concerns.

It would make my day.”

“You know, I have never looked at it this way before, and I have to thank you for sharing a fresh perspective. I have often felt that I should put my money towards shelters or food banks because my goal is to actually help them get back on their feet.

However, if it’s a couple bucks we’re talking about, you’re right that it’s naive for me to think that would somehow get them back on their feet if they “saved it responsibly.”

You are a good person, and have helped me change my opinion here. Thank you for that.”

“But addiction is the reason many of them are there in the first place. It’s one thing if you had a stressful day and want to unwind with some booze, we’ve all been there.

It’s another thing if you’re on the streets getting blackout drunk or smacked out of your mind that you end up passed out face down on the sidewalk day in and day out. I see it every day.

I know homelessness is a complicated problem, but get your life together.”

“Realistically you’re not gonna save a homeless person’s life by giving them $2, so you might as well save their day.”

“The last time I gave a handout, I was at the liquor store, dude sitting out front, it was New Years Eve. Guy looks at me as I’m walking up and I’m about ready to say “Sorry Man, I have no cash” – I never have cash – and he just asks, ” Hey, Could you get me a Colt-45 for later, man?”

Shocked by his honesty, I grabbed him 2 and wished him a Happy New Year, I got to my house party and told the story, people were either happy to hear it, or pissed off because if I’m going to give him something it should be a sandwich or granola bar, blah blah, hell naw.

This guy wants to get f*cked up, giving him a granola bar isn’t going to do sh*t for him, probably just trade it for a cigarette or something.”

Are you okay with giving your money to someone and knowing it will most likely go to alcohol and cigarettes?