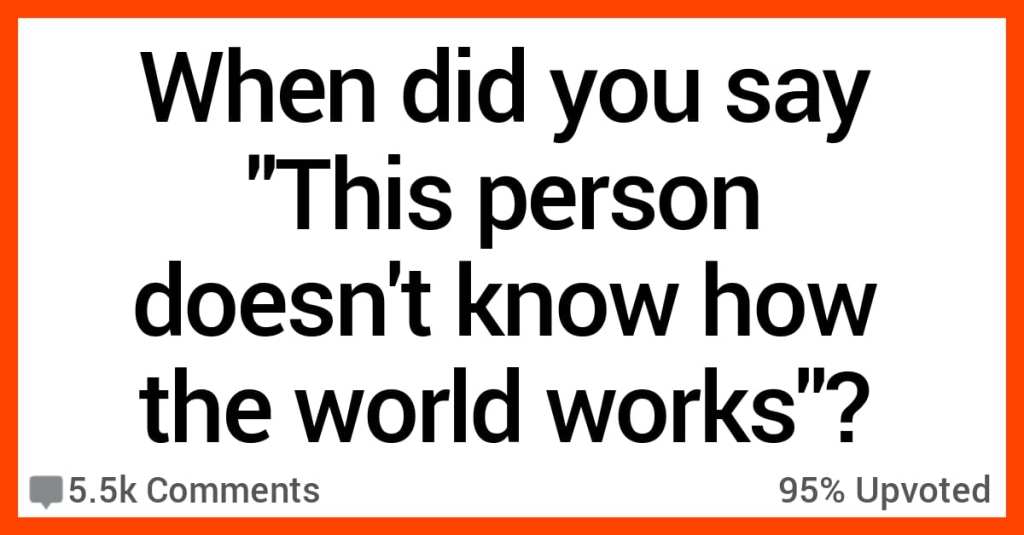 When I was a youngster, I honestly believed that all adults had their acts together and were totally well-adjusted human beings.

I’m talking about all teachers, coaches, parents, and even the random folks I’d see at the grocery store.

But then as I got older I realized that many, many, many people out there are just kind of…well, clueless.

Boy, was that an eye-opener!

AskReddit users shared stories about folks who have no idea how the real world works.

“Guy got hired through a community college work program. Came to work late, was reprimanded by the boss.

On break guy was complaining to the rest of us “He can’t tell me what to do!” He seemed nice so we gently explained to him that while he was clocked in and being paid, the boss could indeed tell him what to do.

Guy thought it thru, agreed with us, but was amazed at the concept. He didn’t make it.”

“I have a coworker in her 40s whose parents help support her still. She bought a new car recently and told me it was some things on her old car (a 2017) were getting old – “like the tires.”

I mentioned i needed to get a new battery for my car, and she was like “i thought only really old cars need their batteries replaced?!””

“My brother is 26 years old and has had one job (he worked there for like two months). Our cousin helped him get hired.

It was the easiest job in the world; a team of people drilled wells (agriculture) and my brother would come at night and watch the equipment. He had a new RV to sleep in. They let him watch TV, bring his dog, smoke, drink, eat whatever he wanted. The only thing he really had to do was be there. He wanted to go to dinner with his girlfriend and asked for the day off.

His boss told him no because he was the only person they had to stay there at night. He told his boss to f**k off and quit on the spot. To this day, he doesn’t work, pay bills, or do anything with his life.

He smokes weed and plays old video games (like random racing games on PS2). Sad waste of a life.”

“I worked with a girl in her 20s who had her first ever official paycheck.

She was beaming with excitement as she opened the envelope, smile drops and she says, “Wait…what are these lines?”

She had no idea what taxes were. We’re taxed to work, to simply live somewhere, to buy things, to sell things, to flush things.

Welcome to poverty, young girl in a low-paying career.”

“Sat in on an interview with a guy who was 18 or 19. He was applying for a job because his parents were going to kick him out if he was unemployed.

That’s fine, he’s applying for entry level. When the hiring manager asked him how many hours he’d be available to work in a week he said he’d be comfortable working not more than 72 because he only wanted to work 3 days a week.

When she clarified that 72 hours is literally 3 full days he replied that he knew but in that tone that tells you internally he thought she was an idiot for asking. No big surprise but we did not hire him.

Ran into him a few years later, he worked up to be the assistant manager at the car dealship I bought my most recent vehicle from.

He remembered me and when I asked how he got the job he said he started dating a guy a while after not getting the job I’d seen him interview for that set him straight pretty quick so at least he got over it.”

“Work at a vet and a woman, late 20s owned her first puppy and we had an argument over the bill because she was sure her dog was covered under Canada’s health care system.

I said it was impressive that her dog paid his taxes.”

“One of my friends fantasized about having ten kids while also being an actress.

When I asked her about her kids, she said she’d just get a nanny to take care of them and that she didn’t need to worry because they’d still love her.

I hope she grew out of that.”

“In class years ago, we were learning about something that had to do with creating tunnels through the mountains and how dangerous and laborious it was at the time.

I don’t recall what we were learning about, but what I DO remember is this one girl raised her hand and said “Why didn’t they just move the mountains”. The entire class stared at her in silence until she realized what she said and burst into tears.

“I used to have a couple coworkers that called out regularly who complained about not having enough money.

We get paid by the hour. If you don’t work, you won’t get paid.”

“My family was visiting Arlington National Cemetery and this Karen lady on our bus asked the bus driver if “there was a place to buy snacks and drinks inside the cemetery”.

Then she got all pouty.”

“I had a friend that thought they could finish their four year degree in two years by just taking double the amount of classes per semester because “they are smart enough to”.

They are now in year five.”

“I’m a senior in highschool.

One of my 19 year olds classmates was complaining about one of our teachers because she gave a syllabus. “How am I supposed to remember to look at it?” He said. “she needs to remind us, it isnt fair.”