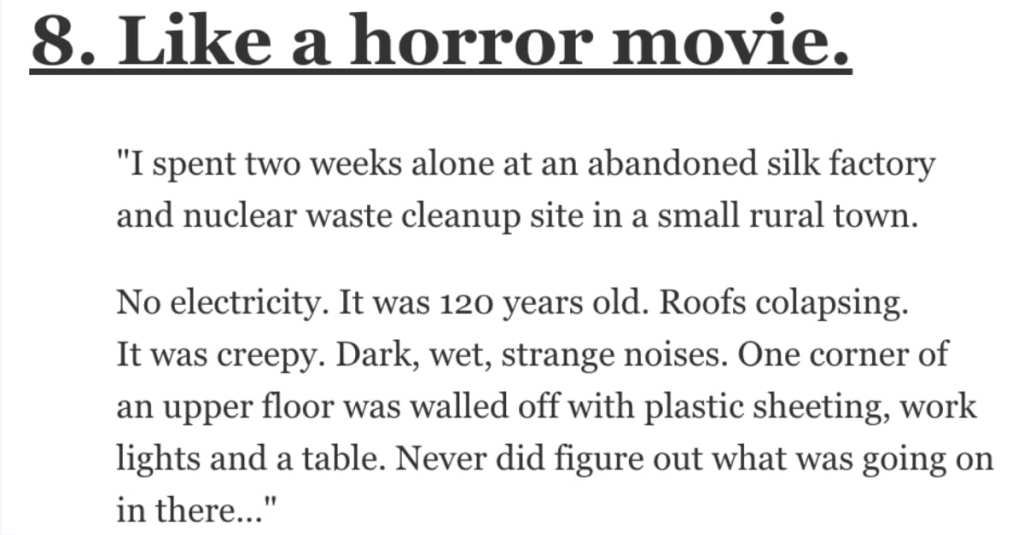 I’m a huge fan of all things creepy, scary, and terrifying, and I especially like hearing stories in this genre that are TOTALLY TRUE.

I’d have to say the scariest place I’ve ever been was an abandoned hospital that was rumored to have been an insane asylum back in the day. We went in at night with flashlights and the place was covered in graffiti, trash, animals, and there were homeless people living in there.

Let’s get creepy with folks from AskReddit as they talk about the scariest places they’ve ever been to.

“Reconstructed subway which exploded years ago in Daegu, Korea.

They memorialized the explosion on site: scorched walls, melted people’s items, burnt phone booths and all, but the scariest was the scorched walls with writings and handprints of the people that were trapped during the explosion.

This subway is one of the busiest stations even today due to being the city’s downtown area.”

“Probably a cave, wriggling through a “lemon drop” as they called it, where you go feet first down a skinny tunnel and have to wriggle down about 12′ before you drop into a chamber below.

About halfway my shoulders got stuck and it took like five excruciating minutes to get loose.

I don’t know why I went spelunking, I’m claustrophobic.”

“An abandoned set of buildings that were part of a former college campus, next to an abandoned military airfield.

There was a lot to explore, but it definitely gave off an unsettling vibe.

There was even an enterable hangar that had a bunch of torn gas masks lying on a pile in the middle of it.”

“I had just crossed over the border into China from Kazakhstan – for some reason, my buddy and I made it a plan to hit as many haunted houses as we could (for whatever reason, there were plenty on our route from Moscow to Delhi).

We found out about one in Urumqi and decided to go – as we went down these dank stairs into what seemed like once was part of an underground system, everything just felt wrong.

The person there had us sit in these gross chairs in front of this odd raised platform. Out of nowhere, this girl (and I mean no more than 14) comes out in a skimpy leopard print outfit with a snake. We are getting ‘gtfo’ vibes but are the only ones there and the dude(s) running the place are right behind us.

So, we proceed to watch this girl pop the snakes head into her mouth and swing it around like a helicopter. After the ‘show’ they tried to guide us to these rooms with the grossest mattresses on the planet on the ground.

It was really sad, creepy, and disgusting. All we could do is shove some RMB in the guys hand and run out.”

“A Greyhound station in Buffalo NY in the middle of the night. I thought for sure I was going to get mugged.

I had a stopover there when I was going to Niagara Falls. Greyhound stations are usually sketchy, but that one was by far the worst. The bathrooms were nasty. And the station, and the way people looked at you. I couldn’t wait to get out of there. It was early morning, but I had a similar feeling as you.

I’ve since stopped taking Greyhound since some driver thought that my bag would be too big and tried to force me to board without my laptop and asthma medication (against their own policy).

It was smaller than most of the other passengers’ bags and fit on the trip up fine. Prices have gone up anyways, so other options are better. Planning on taking the train or Megabus from now on when I need to get somewhere without a car & air travel is too expensive/not worth it.”

Yup great parenting let’s bring a 6-year-old to a place where every light shines on a dead body, and everything else is darkness.”

“Last year I lived in a suburb in Gifu Prefecture.

Down the street was a broken down old house and my friend and I decided to do a photoshoot there one night, because an old broken Japanese house looked pretty cool.

When I say broken down, I mean entire walls were missing and exposing the inside, floors were broken, and lots of old junk everywhere. Pipes and beams were exposed, and there were crates of old belongings.

There was one crate though that had hundreds of photos of the same girl, as a child to adulthood. Black and white, developed from film. It was always just her and no one else in the photo. I thought it was strange that the old owners could just leave photos of this girl behind.

The more I looked at them, I noticed she didn’t seem happy in a lot of them.

I got really uncomfortable and so my friend and I left and abandoned the photo shoot.

I think she might have been a victim of something and that’s why the photos were left behind in a half-destroyed house.

Got really freaked out that night…”

“I spent two weeks alone at an abandoned silk factory and nuclear waste cleanup site in a small rural town.

No electricity. It was 120 years old. Roofs collapsing It was creepy. Dark, wet, strange noises. One corner of an upper floor was walled off with plastic sheeting, work lights and a table. Never did figure out what was going on
in there…

There was an eyeball scrawled on the wall in another area in red marker with the words “it sheds the blood here” underneath.

The building is gone now.”

“We were on our way to Flagstaff, AZ for the Overland Expo and planned to camp near there the night before it started since we were on a longer overland trip.

It was this place in the woods that was recommended by other who were there before. It all seemed fine and we set up camp.

At night when we brushed our teeth we noticed there were animal skulls hanging in the trees all around us, it was super scary.

We packed up and spend the night in a hotel.”

“Some hotel in Atlanta.

My mom and I were traveling to rescue my brother from an abusive situation and she picked a cheap hotel outside the city. It was clear the type of people who came there but figured it wasnt a problem.

As we got to sleep someone started banging on the door screaming how we owed them money. My mom called front desk for security who came and removed that guy. The rest of the night we saw Shadows come back and forth outside the window and they would just be standing there.

Eventually at 4 in the morning the banging came back. My mom called security and had them escort us to our truck because she refused to deal with it any longer.”

“The old graveyard of Olargues in the Hérault, France.

I was camping in the neighborhood and we visited the village, old and beautiful. We were young and inquisitive and climbed the wall around an old graveyard. What we found were 19th century graves, often in little grave houses.

But grave robbers had yanked the lead coffins out of the houses and everywhere were opened coffins with skeletons. It was actually very sad to behold. There were 5 of us and without a warning we all ran to the wall and jumped back to the world of the living.

We all had had a feeling we should not stay there a second longer, we could not explain it, just an overwhelming feeling of terror. About 15 years later I passed that cemetery on the back of a motorbike and just looked through a crack in the wall. I was struck with that same feeling.

It is not a good place.”

“I was doing some intense, solo, off-trail hiking in the Eastern Sierras and found an old mine entrance.

Being a teenager I immediately walked in there. Shortly thereafter, I started getting light headed and ran back out.

I could have easily passed out and died, and, given the extremely remote location, remained unfound for years.”

“My parents spent a lot of time in war zones for their careers and had strange ideas about what made a good family holiday.

So, anyway, we ended up going to in Egypt and Lybia in 2011. If you don’t know, this was the year of the the Cairo riots/Egyptian revolution and the Lybian civil war.

I was 15, really made me see the world differently. In multiple ways – saw lots of scary people with guns, but also slept out under the stars in the Lybian desert and saw a nights sky with 0 light pollution.

Nothing can prepare you for the sheer brightness of the stars when everything else around you is pitch black. That also changed me, made me understand how insignificant and tiny we really are. Also got to see the pyramids at a time that had no other tourists, whole place was totally abandoned. (But that’s irrelevant to the question I guess.)

Overall was an 8/10 holiday. Probably wont take any of my potential future kids into a war zone though, I wouldn’t recommend.”

“I don’t know why this happened, but by the end of it you’ll understand when I say my parents aren’t known for making the best decisions.

So, when I was 9 or 10, my dad took me to this house that had been basically destroyed by fire. I don’t remember exactly whether my mother was there or she just OKed this (they were not together, ever). There were other adults involved in this too, I think my uncle and one of my dad’s buddies. But I was the only kid.

Anyway, we went into this fire-destroyed house to look for sh*t that could be salvaged. We found very little and really that should have been nothing at all (all I really recall anymore was an 8-track tape that had been warped just enough by the fire to play two songs at once in spots).

So there’s lil kid me, after dark, picking my way through this f*cking burnt house full of debris, and I get into one room and look in what had been the closet and there’s this…shag rug looking thing there.

Which was when my dad helpfully told me that the daughter of the house had run back inside the fire to try to save the family dog, and died in the closet with her arms wrapped around the animal…and that wasn’t a rug but the remains of the dog’s body.

And then I was encouraged to look through this dead kid’s toys to see if anything was in good enough condition for me to take home.

I’ve been afraid of dying in a fire ever since.”

You know the drill!

In the comments, tell us about the scariest place you’ve ever been to!