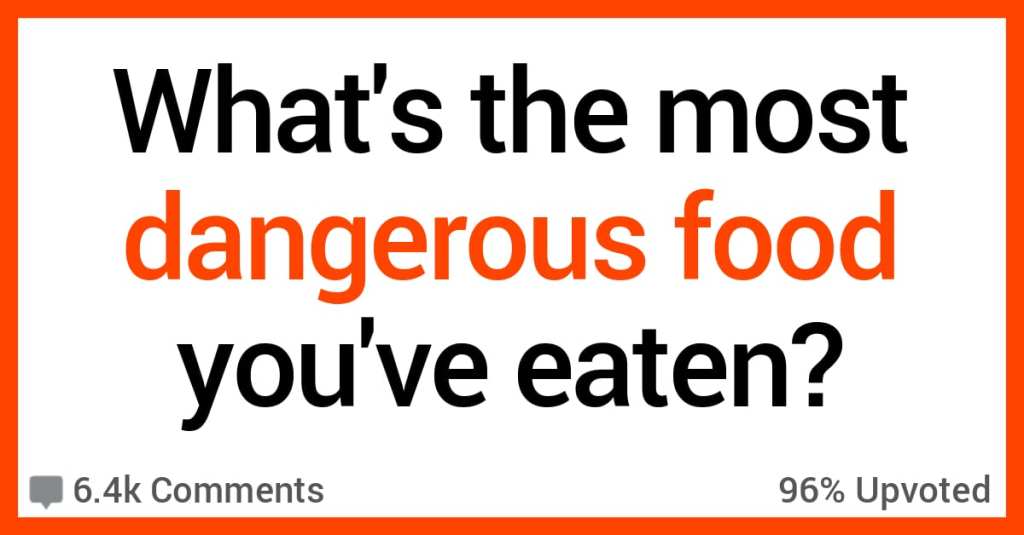 People Share the Most Dangerous Foods They’ve Ever Eaten

I don’t know about you, but food classified as “dangerous” doesn’t sound like a great idea to me.

It sounds like something that might eat its way out of my stomach…or burn my insides so bad that I’ll regret it in a major way.

But I guess some folks out there like to live dangerously…

And these folks on AskReddit definitely do…

Poisonous mushroom that can be lethal if not parboiled correctly, but I trust my mom.

She makes AMAZING mushroom sauce from them. One of the best thing I’ve eaten.”

“House was low on food. Grabbed a random can of soup.

It tasted like NOTHING. Thought I was getting Corona.

I decided to look at the can and the expiration date was more than 10 years ago.

“I used to eat raw hamburger meat right out of the package. I LOVED it as a kid.

When I got older and learned how contaminated ground beef was I was shocked I didn’t die of E Coli poisoning.

I later discovered steak tartar and I prepare it myself from a larger piece of meat.”

You need to cook a toxin out of them before you eat them, usually by boiling for 15-20 minutes.

I was just tossing them in a slow cooker when I was making chili.

Luck was on my side, until it wasn’t.

Imagine, if you will, a case of food poisoning. Usually it only lasts for about a day or so until your body has cleaned house.

Some ingredients were bad and the whole family got salmonella. It was not a fun week.

Couldn’t control anymore when to go to the toilet, had to run there at night already sh**ting myself, puking a few times a day.”

“Flashbang Hot Sauce. I did a challenge with it and ate about half a teaspoon.

At first, when the room started spinning, and my ears started ringing, I knew I was in trouble.

When the double vision started, my fight or flight kicked in like an actual grizzly bear was in the room.

I blacked out at one point and came to in the washroom trying to throw up the lava boiling my insides.

It was pretty much Homer Simpson’s chili experience, but in real life”

Turns out it was a key that opened the seventh circle of Hell in my guts.”

“In Vietnam they really like to eat eggs that are really close to hatching, meaning that the chick is inside of it and covered in goo.

They told me that it was supposed to bring good luck and protect you against demons.

Haven’t had any encounters with demons after that, so must’ve worked.”

“A peanut sweet we have here in Brazil.

Just hearing it’s name gives me nausea to this day.

I was 7 the first and only time I ate it and I threw it up so much in the car my dad used to have, that when he sold it it still had a stain in the backseat.

Suck off the outside fleshy stuff and it’s delicious and healthy. Bite into the seed thing in the middle and you d**…

Not sure how true this is but they are for sure pretty toxic so you do have to be careful.”

Food tasted decent, but afterward the translator came back and said we shouldn’t get food without him because there was a high chance of it being camel in that area.

And he said camel carries a certain disease that humans can catch.”

I’m not sure whether or not it is actually dangerous, but I can think of nothing else that made me eat ice cream in agony like that.

I also think I saw God.”

“A pound of rotten bacon.

Backstory: I was broke as hell, could barely afford liquor, much less food. Somehow I had money to buy a pound of bacon, a treat I had not had in a while. I got called in to work, and then had a whole series of thing pop up preventing me from coming back home.

I get back and find that bacon, decide to cook some and as soon as I open it I see it is green, and smells horrible. F**k if I’m going to let that stop me. I cook it and it actually smells like bacon…..and death. I take a bite and gag on the smell, but there is still some underlying bacon taste there. I soldier on, and for some reason continued until I had eaten the entire pound.

Oddly i suffered no ill effects. I think my youth, preexisting chronic diarrhea, and the soul crushing volumes of antibacterial clear liquids I consumed probably helped prevent anything toxic(besides me) from surviving the event.”

What’s the most dangerous food you’ve ever eaten?