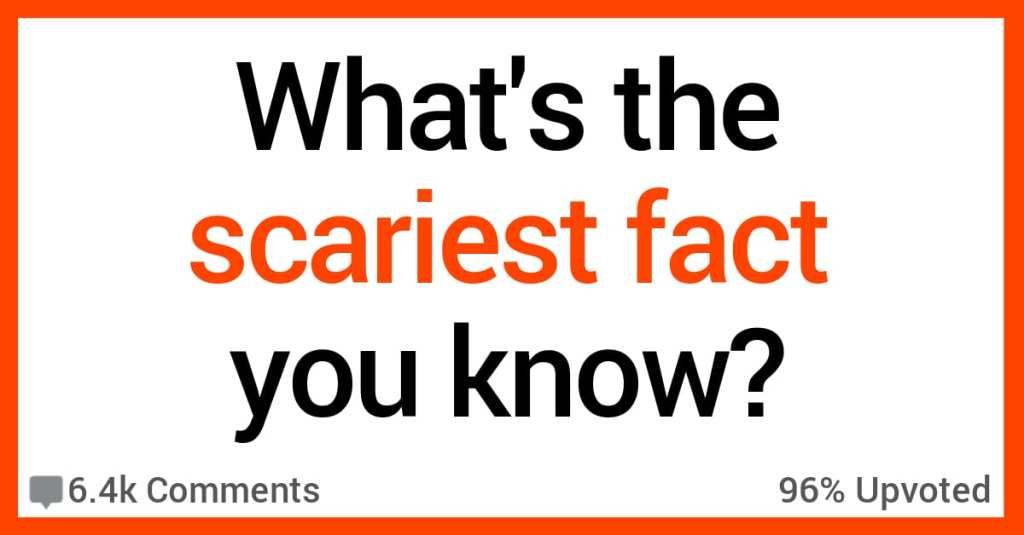 Whenever I really want to creep myself out, I start to read about the nuclear arsenals that different countries around the world have and how many of them could easily fall into the hands of the wrong folks out there…

That’s the scary stuff for me.

But everyone is different.

What’s the scariest fact you know?

“A lot of people don’t realize rabies is extremely fatal. It’s one of the deadliest diseases to ever be seen on planet earth, deadlier than any plague.

Only a handful of people have ever survived rabies untreated, I believe the number is around 5. And most of them were completely crippled for the rest of their short lives.

Don’t ever get rabies.”

“That a large number of asteroids and comets that could potentially hit Earth directly have not even been discovered as of yet.

And our ability to actually stop a large object travelling stupidly fast is much worse than depicted in films.”

“Your tastebuds are actually cilia and are constantly being worn down by the movement of your tongue in your mouth.

If you end up in a coma for long enough, your tongue becomes fuzzy.

Maybe it’s just me, but that adds to the very long list of reasons I never want to be in an extended coma.”

4. Not a comforting thought.

“We’ve come very close to nuclear war and had nuclear accidents many times.

“That you really do need 7-9 hours of sleep every day.

Even at 6 hours, the lack of sleep decreases efficiency, productivity, and increases risk of developing dementia and Alzheimer’s. Furthermore, it weakens the immune system and handicaps the body’s ability to destroy cancer cells, which therefore increases risk of cancers of the breast, colon, ovaries and prostate.

The scary part of it is that you can’t get back all the sleep that you lose out on because “sleep efficiency” decreases, so trying to catch up on the weekends isn’t really making up for what you lost throughout the week. Ironically, those who say “I can sleep when I’m dead” will end up dead quicker because of lack of sleep over time.”

6. Beware of the botfly.

“A botfly can lay an egg in a fraction of a second.

Literally swatting the fly can be enough for it to lay an egg which burrows into your flesh and feeds in there until it hatches and matures enough to fly away and start the cycle again.

It can also happen to an eye. I know this because I’m an eye doctor and I have removed a botfly larva from the INSIDE of an Eyelid (tarsal conjunctival membrane).”

“At any second the whole planet could be completely destroyed by x-ray bursts from quasars.

So many other scary things have practical solutions for protecting the human race, but there is no defense humanity could conceivably develop against such a massive amount of energy.

I subscribe to the Star Trek utopian techno future, massive gamma or x-ray burst.. nothing can stop it.. goodbye planet earth.”

The earth’s magnetic poles (places your compass point to) are moving at an alarming rate.

While they switch (think north compass arrow will point south) every 10,000 years or so, we are over due for a switch… so like happy 2021 y’all.

Also the supervolcano under Yellowstone does technically have the fire power to wipe out much of life on planet earth, but its NOT over due like many people try to claim it is. That’s just fear mongering.

ALSO there was a point in the past during the ice age (I think) were less then 2000 humans were alive. If it would have been modern humans we would have to put ourselves on the endangered species list.”

“Surfer’s myelopathy is a non-traumatic injury most often seen in novice surfers, where they tweak their back while trying to get up on the board.

They initially feel pain and and weakness and then they become fully paraplegic. It doesn’t even have to be surfing. Yoga, pilates, or even getting up from laying down.

You just hyperextend your back a little weird one day and bam, you’re in a wheelchair, completely paralyzed from the waist down.”

“There is plastic everywhere from the highest mountains to the deepest trench in the ocean.

It’s estimated that by 2050 there will be more plastic than fish in the ocean.

And it is bad for us, likely causing fertility problems and reducing pe**s size.”

Your grave gets visited the last time

The last person who even knows your name dies

You are completely forgotten and gone.”

“If you commit a m**der in the United States, the chances that you will be arrested and convicted for it is less than 50%.”

“An average person walks past at least 16 m**derers in their lifetime.

And sometimes the m**derer turns out to be someone you grew up with.

One of the most disturbing phone calls I’ve ever gotten was an old friend calling to tell me a mutual buddy had just been arrested for beating his ex-girlfriend to death with a brick.

It’s been fifteen years since we graduated high school and went our separate ways, and I still can’t reconcile the memories of a goofy skater kid with the facts that came out during his trial. How could we not have seen the anger in him?”

What do you think is the scariest fact you know?