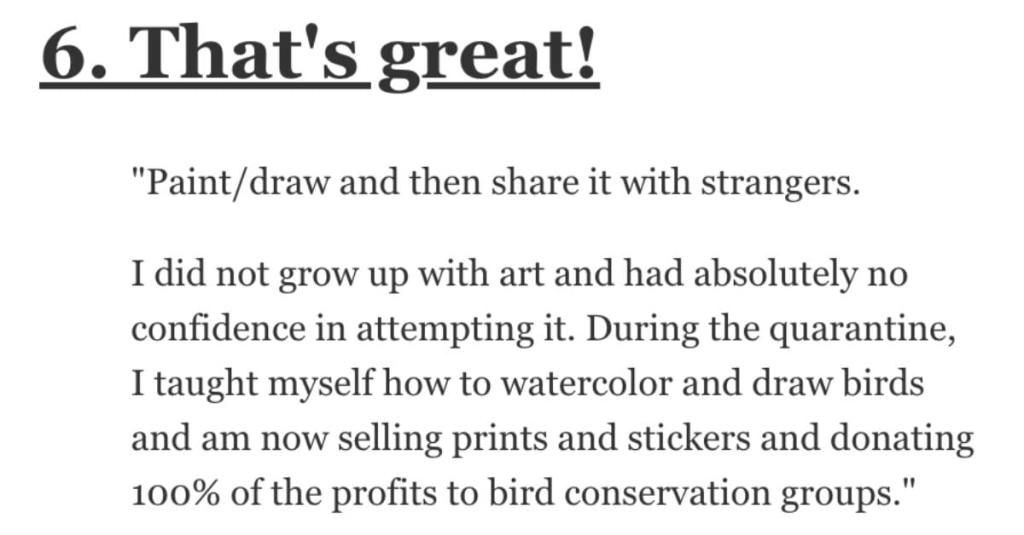 You live and you learn.

When you get down to the nitty gritty, that’s basically what life is all about. You improve, challenge yourself, make mistakes, try new things, and overcome your fears.

Some things just take longer to get worked out, you know? And once you get over your fear of something, it’s a great feeling to be able to do it.

So, what do you do confidently now that made you feel weird in the past?

Let’s check out the responses from AskReddit users.

“Unwrapping a tampon in a public bathroom.

I used to be so shy about it, but now I rip those suckers open without a care.”

“Walking down the street, realizing I was going in the wrong direction, and making a U-turn without pretending to have forgotten something.”

“Going out for a meal on my own.

The first time I did this when I was about 20 years old. Moved into a new neighborhood and really wanted to try this cute little place down the street from my apartment but was solo.

Put it off too many nights to admit, until finally said f*ck it, grabbed a book, got a table and had the 4 course prix fixe menu and I loved it! I was super nervous and embarrassed, but ended up having a pretty fine time, ends up I’m ok company.”

“Swim without a shirt on.

My sisters made fun of how I looked without a shirt on when I was like 12 and it stuck with me for years.

Just the other day I went to the beach and realized that I finally don’t care anymore.”

5. One of my favorite things.

“Not since February, but going to the cinema alone.

First time I ever did, back in 2016 it felt weird. Even had a mother ask me if I was waiting for anyone when I saw Kong: Skull Island, but now I actually prefer it most times. It means I don’t have to worry about scheduling with a friend on what day’s best.

Don’t get me wrong, I have still gone with friends but 90-95% of the time I go alone, I can do whatever I want before or afterwards, whether to look around the shops or just go straight home.”

I did not grow up with art and had absolutely no confidence in attempting it. During the quarantine, I taught myself how to watercolor and draw birds and am now selling prints and stickers and donating 100% of the profits to bird conservation groups.

I used to be terrible and my accent still sucks sometimes, but after more than 20 years of practice and a bachelor degree from an English university, now I’m quite proud to be bilingual.”

“Asking people to pay back money they borrowed.

Back in my senior year of college, I used to dread asking my roommates to give me the money for the bills.

No idea why, since that’s what they agreed to, I just felt like such an *sshole for doing so.”

“Have conversations with people.

I used to basically not be able to talk to anyone for any length of time without being drunk, small talk and deep conversations was super hard for me.

Now 6 months later I have talked to people for hours that I have just met about anything under the sun.”

“Go out in public and be around crowds.

When I first started using a wheelchair, I was hyper aware of people staring at me, avoiding getting near me, or acting strange when interacting with me.

Decades of being a wheelchair user have desensitized me to all that, hardly notice now.”

A lot of people struggle with saying no. I used to struggle with it as well. I got a lot of advice to “be unapologetic. You don’t owe anyone anything. You don’t have to give a reason to say no.”

That is stupid advice. That is obviously going to harm your relationships.

Instead I realized that “most” people are reasonable. I present my case in a way that the other person can understand and explain why I need to say no. Almost everyone understands and does not want to put you in a difficult situation.

If the other person is not reasonable, there is no point explaining further. Then you just gotta say no. But you need to try to explain first.”

“Talking on the phone.

I was crippling shy as a teenager, to the point I’d have to script what I was going to say before doing something like phoning for an appointment.

Then aged 21 I got a job in a call centre and nowadays I can phone anyone with ease (though I’d never say it’s my favorite thing).

“Embrace my absolute love for pink after years of deluding myself into believing I wasn’t like the “other girls”.”

Getting older and caring less about what people who don’t matter to me think of me has been extremely liberating. I’ve also learned that most people aren’t actually paying attention when you do something stupid or embarrassing, people are usually off in their own little worlds.

I was a very self-conscious and eccentric child, but adult me has fully embraced my weird side, and it’s wonderful. I am who I am meant to be, and I’m surrounded by amazing people.”

What do you do now with confidence that made you feel weird when you were younger?