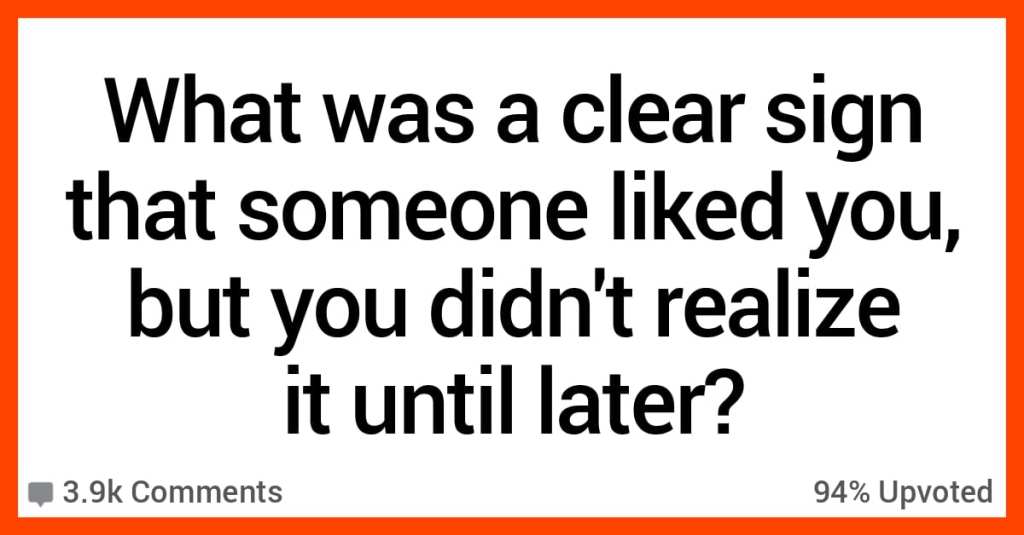 Signs, signs, everywhere there’s signs…unfortunately we just fail to pick up on them sometimes…

Hey, don’t get too down on yourself about it, we’ve all been there: someone likes you, they try to let you know in a roundabout way but you just don’t pick up what they’re putting down.

Let’s check out some stories about this phenomenon from AskReddit users.

“Making a beeline to sit on my lap on multiple nights out, repeatedly asking for my ‘help’ with buying stuff on eBay, inviting me specifically to a party at the end of our first year at uni. Those are just the ones I remember in hindsight.

Teenage me was about as attentive as a concrete bollard. All the more annoying since she was just the right sort of quirky and weird, and I’d have been all about her in a heartbeat if I’d realised.”

“There was a lot of touching from her. Just general flirtatious behaviour. Had another girl even comment on how cute we were. The icing on the cake was her kissing my forehead, and saying “I would not want to kiss you in the wrong place”.

I was way too young when I started college and was way too clueless around girls due to having a pretty sh*tty high school experience.”

“Cute Friend: “Do you have a girlfriend?”

Cute Friend: “Are you dating someone?”

Cute Friend: “Wow. If you asked me out, I would date you.”

“There was a girl in college who I had a crush on. One night, she described the “type” of guy who she’s attracted to.

She basically just described me, but since my self-esteem was so low at the time, I was like “d*mn I wish I was like that…” A few days later, my friends were discussing it and they were laughing at me for not making a move.

It was actually a huge wakeup call for me to get my mental health together.”

“She used to crash in my bed because her dorm was “too far away.” I really liked her and didn’t want to scare her off by taking advantage of her.

“In high school. She was gorgeous. She ended up wearing my leather jacket and said I was “mysterious.. and HOT!”

I just thought she was being nice. Sigh.. I was way too shy to do anything about it.”

“She, along with my parents, helped me move into a new apartment. She was my then girlfriend’s old roommate and I thought of her as a friend.

As soon as my parents were out the door, she gave me a big grin, grabbed my hand, and started pulling me toward the bedroom. I thought it was her just making a joke.

“A girl I had a crush on wanted me to hide in a closet with her in her bedroom to “scare her friend”. Waited in there for like 10 minutes and her friend never came into her house.

I think she wanted me to make a move…”

“They wanted to buy chewing gum and asked what flavour to get. I asked why, they told me I’d be tasting it later.

Went straight over my head…”

“Once a girl took me to my favorite tea place, bought it for me, then we went thrifting and she bought me buttons in a jar, and I still didn’t get it.

And she like sat very close to me and even wrapped her arm around my shoulders but. nope. her efforts failed so hard.”

“Freshman in college and I was a moron.

“I heard you like Monty Python. Want to watch it in my room?”

Thought it was a totally common thing to hear in an American school.

Cut to: three episodes in, she’s sitting on my lap, arm around me, and asking me to stroke her legs. The most pressing thought in my mind was “she wanted to watch the show why isn’t she paying attention?”. I

don’t get it until she asks me if I want to kiss her. I turn her down because I promised my long-distance friend I would take her on a date later.”

“She wrote “I want you in my pants” in my yearbook but I just thought she was joking, or was just something girls did.

She was one of those friends you don’t think about that way until one day you do. Man, I couldn’t have been more oblivious.”

“I had a coworker in a coffee shop I used to work at. Most beautiful girl I had ever met inside and out. I used to joke with one of our mutual coworkers that I would marry her in a heartbeat if I ever got the chance. We became really good friends.

Would go on midnight drives, sing songs the whole time. Go look at the stars while sitting on the roof. We would go get lunch together, and do art in her apartment. Talk for hours and hours about the things in life that others cant share.The whole shebang in retrospect… but I lacked the confidence to ever ask her out formally.

I was so afraid that she just valued my friendship, and that by asking her out I would cross some invisible line and lose all that time that I cherished. I never ever made a move. Time passed and she began dating someone else (a godd*mn Saint of a man) and I fell into a cycle of unfulfilling relationships.

Years later Im talking to our mutual coworker who I was still friends with. Turns out, after I stopped working there he asked her if she ever liked me in that way… She did.

I had a chance with a woman I can now only dream of, and now she’s married to the Saint, and I am alone typing up one of my deepest and most painful regrets on the internet.”

Has this ever happened to you?

DID YOU REALIZE LATER THAT YOU TOTALLY BLEW IT?!?!