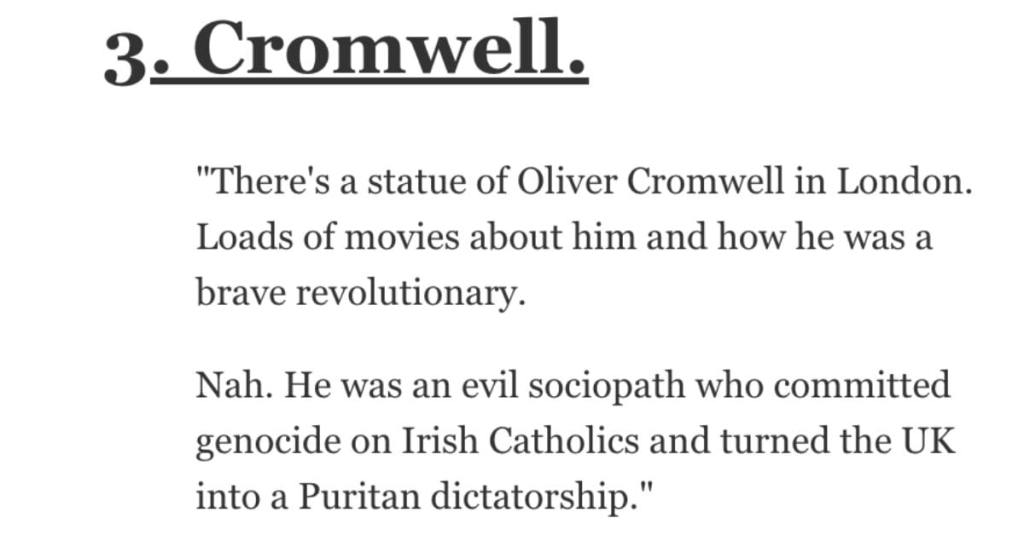 History, as they say, is written by the winners.

And, depending on where you grew up, you learn from a young age who are the “good guys” in history and who are the “bad guys.”

But sometimes those stories and legends don’t really jive with reality.

Here’s what folks on AskReddit had to say about historical figures who are not nearly as squeaky-clean as their reputations would have you believe.

“Alexander Graham Bell pushed for the eugenics of deaf and hard of hearing people and was a major obstacle to fund schools for the deaf, which thankfully did persist despite this guy.”

“Henry Ford was so anti-Semitic that Hitler considered him a hero.”

“There’s a statue of Oliver Cromwell in London.

Loads of movies about him and how he was a brave revolutionary.

Nah. He was an evil sociopath who committed genocide on Irish Catholics and turned the UK into a Puritan dictatorship.”

4. Haven’t heard this before.

And there’s a very good story to back this up that also explains how he grew to be no.1 reggae singer of Jamaica.

He had a posse of friends that would intimidate radio networks of Jamaica into playing his music, as well as destroying the alpha discs of other newer artists (idk wtf they’re called but the copy the radio networks were given in order to play on the air.)

He might have been trying to promote feel-good music and peace and all that but he was a thug when it came to getting that music out.”

The guy did great things, and created a program of recovery that has saved millions of lives since it’s inception 85 years ago.

He was also an arrogant *sshole that cheated on his wife even in sobriety.”

“In some aspects to the 60’s and 70’s when the Beatles were icons, (I’m talking about John Lennon) people who use his image and face for “peace” sometimes forget important details.

So whenever I see a bunch of people sing imagine I just shake my head in shame cause so many people don’t even know how bad he was but act like he was a saint.”

Did a lot for the country in its infancy but treated indigenous people like garbage.”

“Joseph P. Kennedy, dad of John, Bobby, and Teddy, had one of his daughters lobotomized.

She was likely autistic but was considered an “embarrassment to the family”.”

I’m French and I don’t get why people like him so freaking much here. He re established slavery and tried to conquer a huge part of Europe, leaving literal bloodbaths behind him.

Gosh, even the painting of his coronation reeks of narcissism, he’s putting the crown on his own head for f*ck sake.”

Interesting quote of his, “I don’t go so far as to think that the only good Indians are the dead Indians, but I believe nine out of every 10 are””

He never wrote a song in his life, but his record label made any song writers hand over half of their writing fees, before Elvis would record their songs. He’s credited as a co-writer on the majority of his songs.

That’s why Dolly Parton refused to let him record I Will Always Love You.

She wouldn’t sign away any of the songwriting credit or future profits from her work. She’s a savvy business woman.”

Biggest monopolist ever and took credit for other people’s work. He didn’t invent the lightbulb but bought the rights and advanced it. He monopolized the film-projector + most films at the time and it took a very long lawsuit to get that fixed.

He took many creations from his employees and put his name on it. This wasn’t illegal because of the contracts employees signed at the time but it’s not exactly a sign of good will.

I don’t hate the guy but his character is often completely exaggerated.”

“Not necessarily a “good guy”, but got lots of positive attention from the release of The Greatest Showman.

Apparently PT Barnum was a terrible person in real life.”

“Hitchcock was SO f*cked up.

He was famous for pulling “pranks” like chaining a dude up over a long night and giving him a bottle of whiskey laced with serious laxatives, so he sh*t himself, painfully, in chains, for twelve hours or so.

He made the actress from Psycho, Janet Leigh, stand in the shower for almost a week; she only takes baths now. The degree to which he abused Tippi Hedrin during that scene from The Birds is… wow.

He literally threw birds at her for five days, eight hours a day, so that they were pissed off and actually attacked her, even after her doctor told him she couldn’t take any more. She still has scars. Not to mention the s*xual assaults and the threats to “ruin her career” if she didn’t comply.

He sent her daughter, Melanie Griffith, a really lifelike doll of her mother, dead in a coffin. She was eight.

Dude was f*cked. Behind the B*stards does a great couple episodes about him, those are just the ones I remember off the top of my head from 2+ hours of it.”

In the comments, tell us who you think is regarded as a “good guy” in history but was actually pretty terrible.