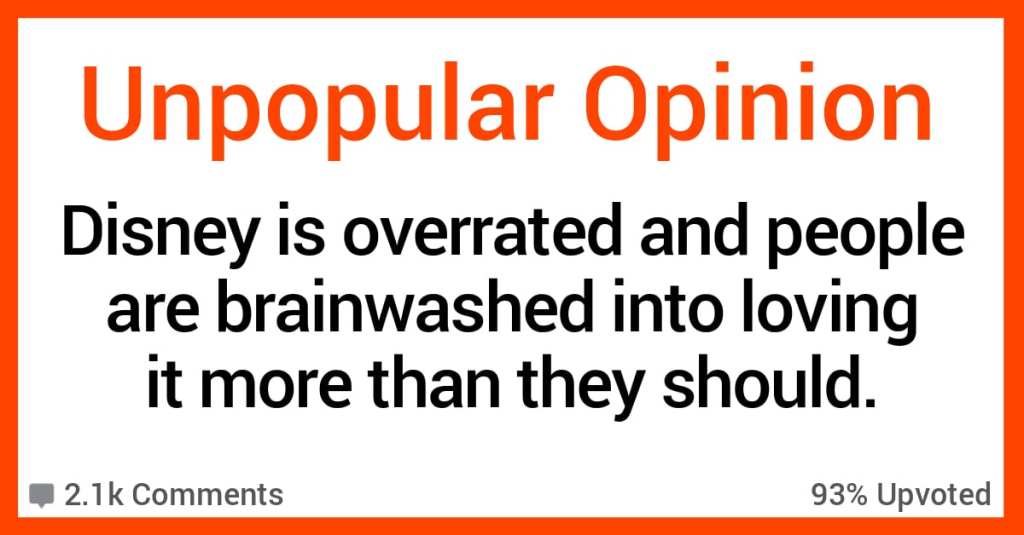 People Share Their Opinions Whether Disney Is Overrated or Not

I’m gonna be totally honest with you about something: I kind of don’t understand the fascination with the Disney universe.

It was fun to go to Disney World once as a kid, but I really don’t think I’ll ever go back. Does that make me weird or un-American? Perhaps…

One person got REALLY worked up and wrote a lengthy diatribe on Reddit about how they think all-things Disney are totally overrated. 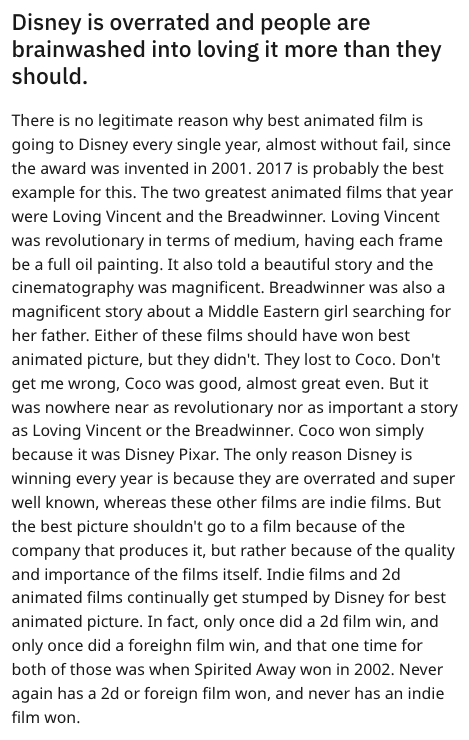 And now it gets… pretty pointed. 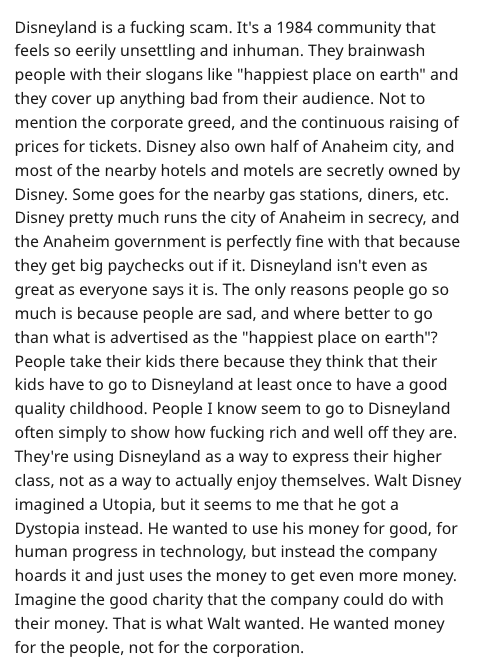 So what about working at Disney? Well… 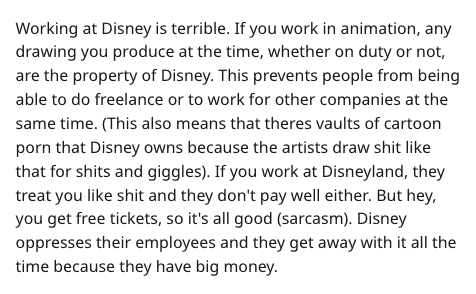 And how about their competitive tactics? Well… 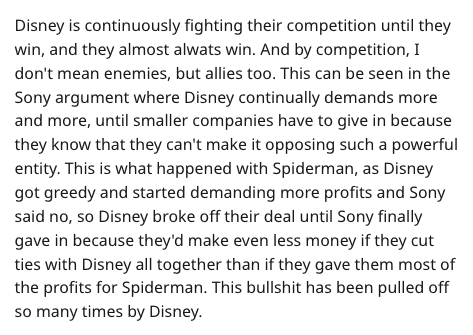 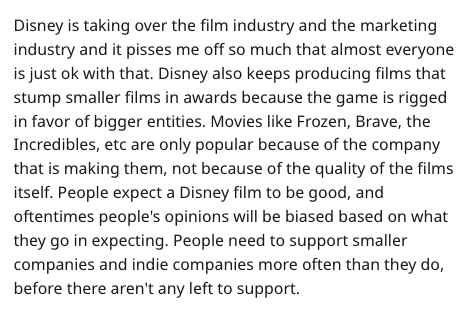 Let’s see how Reddit users responded to this hot take.

1. A good experience for kids.

“I agree with everything except for taking your child to Disneyland/world to flaunt off your money.

I know many people (including my own parents) who took their children to Disneyland even if they weren’t super comfortable in terms of money just because it felt like a good experience for their children.

And to be honest for a young child it is really fun so I think that if it’s just a one time thing it’s not to show off their money.”

“I went with my two kids in February and it was fun and affordable.

Also, I know people who work in Disneyland and Disney World and they say it’s better than the average gig for them.

They are musicians and actors if that matters.”

“It took us months of saving and now months of paying off afterwards but it was totally worth it to see our kids’ faces when the saw all the characters they have been non-stop talking about in person.

The Bibbidi Bobbidy Boutique turned my little girls into princesses and I will cherish that day with them forever.

Definitely got my value out of it.”

“This same concept applies to the music industry too.

Popularity makes you win, not talent. If you’re in any genre of music that’s not popular you can kiss your chances goodbye – the closest you’ll get is a token nomination.

This isn’t to say talented people don’t win – just that they are only the ‘most talented’ within the small field of popular parameters.”

“Bud, I have a little secret to tell ya, all film awards are bullsh*t.

The exception to this is the SAG awards, because that is voted on by thousands of actors and actresses (Source is that my mom is in the Screen Actors Guild).

If you win an award and want it to be truly based on your film, get a SAG award.”

“I agree with pretty much all this and think Disney has some pretty shady tactics and we should all be wary about their exponential growth, but you have to keep in mind 1 thing: Nostalgia.

Disney has huge nostalgia factor because it produced a LOT of people’s childhoods. I’m in my early 20’s, and I’ve met like 3 people in my life who did not grow up watching Disney stuff. Nostalgia is powerful, and Don Draper’s mini-monologue on it from Mad Men puts it best.

Also, while Coco may not have been the best from a technical standpoint that year, it was also a HUGE cultural event that really gave so many Hispanics a sense of pride because it was a story told about us, and we don’t get those often.

I think that one movie specifically didn’t just win because Disney, but it won also because of the cultural impact. Personally, I was happy to see it win, but I thought Loving Vincent deserved it more.”

But I like other movies made by other groups too.

I don’t care about any movie awards. I just watch what I want and enjoy it.”

“Oh boy, I agree. I’ve been to Disney once as a kid and once as a adolescent. I’m good from those experiences for the rest of my life, unless I have a kid and want them to experience it.

I’m friends with a kid whose parents have a Disney addiction. Thousands of dollars and dozens, if not hundreds of vacations were spent down there.

“There is something to be said for Disney.

They have the resources to explore different cultures, time periods, and stories all while having the best composers in the world compose and seamlessly integrate broadway-caliber songs into the movies.

I’m all here for independent films but it’s hard to knock Disney for doing what they do consistently every year.”

“Disney is like Nintendo in that they both make high quality content with mass appeal, but it’s mainly cause of the nostalgia they’re designed to give you.

Nobody remembers when their parents took them to see The Pacifier, but they sure as hell remember going to see Wall-e.

When people are together and having fun they’re more likely to remember something.”

“I mean…it’s fun if you’re an adult too. And honestly, there’s a lot to do for what it costs.

I’ve seen people pay waaaay more than what a Disney World ticket costs on a night out drinking with their friends or on their gaming PC, yet I don’t see the rants on here about that.”

“I didn’t watch Disney movies growing up so I missed the point of my life where I’d “get it”.

So I can’t objectively say they’re overrated or not because I just haven’t watched enough.

I do however dislike the fact that they’re on the path to owning absolutely everything.”

13. Check out the French movies.

“The creators of The Breadwinner also did a couple of Irish Folk based films called The Secret of Kells and Song of the Sea. Both beautiful films. Not as sad as The Breadwinner. The style of animation is amazing in all those films.

In my opinion, the French hold the title for best animated films though. The Little Prince, Nocturna (probably my favourite), The Painting, A Cat in Paris, Mune, April and the Extraordinary World etc. That’s to name a few.

They have such dreamscape movies that no other country can seem to match. So much more depth in their stories and the animation styles are so gorgeous.

I highly recommend all the films I just mentioned. They are definitely worth the watch!”

What are your feelings about Disney?