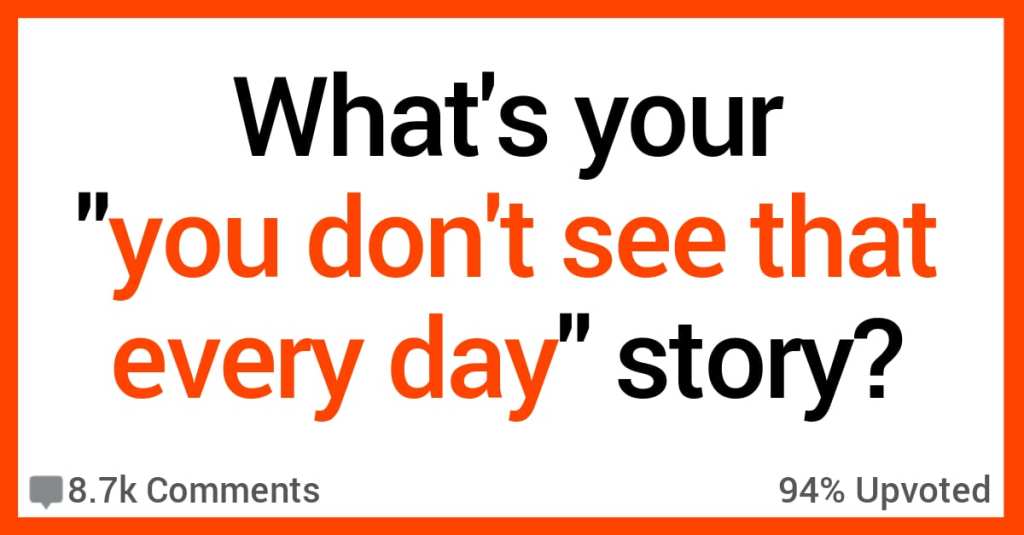 People Share Their “You Don’t See That Every Day” Stories

The world is weird.

So it’s only natural that sometimes you’re gonna see some stuff out there that really catches you off guard, you know what I’m saying?

Have you ever said, “you don’t see that every day”? These AskReddit users did and they shared their stories.

I arrived at Newark and was getting a combination of Bus/Train to Penn Station. A family came running behind us towards the platform, a crazed red head screaming.

A voice behind her yelled “Mindy, Mindy! You don’t know where you’re going!” Then another voice yelled, “Where’s Mindy Going?” and Mindy finally replied “There’s only one train!!!”

During the Bus ride portion of the journey I saw police clearing up a crime scene of what looked like a mob hit. Chalk outlines, bullet casings, body bags, crime scene tape. Although I am lead to believe this can be seen every day.

Finally in Times Square a man approached me, put his hands on my shoulders and asked “Excuse me sir, are you Jesus Christ?”

“Saw some dude get chased down a street in his boxers by some woman with curls in her hair and an evening robe.

“My family was on vacation in San Diego.

One day we decided to go to the San Diego Zoo. While we were there we stopped at the polar bear exhibit.

We got to watch as a duck landed in the enclosure and got eaten by a bear.”

“Was at a hotel front desk in Dallas on a business trip, turned around and saw a group of people in mascot costumes and I screamed.

Turned out it was a Furry convention which I had to google as never heard of it before.

Then saw one in full costume by the pool sunbathing, must have been roasting.”

“Got off a train in a suburb from Chicago around midnight and a guy with only a tire around his waist came walking up, wandered around while everyone got off the train and then got into a car and left.”

“My band several years ago were loading our equipment into our trailer from our practice studio and getting ready to hit the road for a tour.

A kid of maybe 10 comes riding down the alley on a bike, stops us, and asks if we want to see what’s in his backpack. After one of us said yes he proceeded to open it up and show us a bag stuffed with various roadk**l; squirrels, mice, rats, rabbits, etc.

The smell alone made us want to puke. The kid never gave us an answer for why he was picking up d**d animals.”

“A woman dressed entirely in skirts.

Like a short skirt for a top, a long skirt as a skirt, and a skirt on her head covering her hair.

Sadly, her sandals had no skirts.”

“A group of people gang banging in an alley.

Someone was recording it.”

“New Orleans boasts the longest bridge in the United States. Takes about 30 minutes to cross.

At the start of the pandemic, I watched an SUV drive the whole way with a guy standing on the running board holding on to the roof rack.

“Had a turkey vulture swoop down and k**l a squirrel right in front of me, and then not 30 seconds later, a red tailed hawk came down and ki**ed the Turkey vulture.

Hawk is going to town for about 5 minutes, when a Bobcat that had apparently been watching this s**t the whole time sprints out and k**ls the hawk.”

“I was walking home from school and came across a deer alive with his horns stuck in a chain link fence.

I had thought he d**d only for him to rip himself loose and take off.

He had broken into the high school and trashed the brand new entrance that was mostly glass.”

“This is probably a bit lame for you guys but here it is. On a completely still day, basically no wind at all, I was looking up into a tree, at the end of a branch where only one leaf remained.

I was humorously thinking that’s the toughest leaf, still clinging on, up high gazing down at the bodies of his fallen comrades, what a champion. At that time this leaf fell and I watched it slowly drift to the ground. I immediately thought that what I had just witnessed was extremely profound. That last defiant soldier finally accepting it’s inevitable fate and drifting off to eternity. Pardon the pun but I know this sentiment is quite sappy.

I imagined how much more powerful it would be to see the last leaf of an entire tree fall off instead of the last leaf of a particular branch. This was about 8 years ago and I still remember it vividly. So there you go, that’s my story. I believe it fits into the category of something you don’t see every day.”