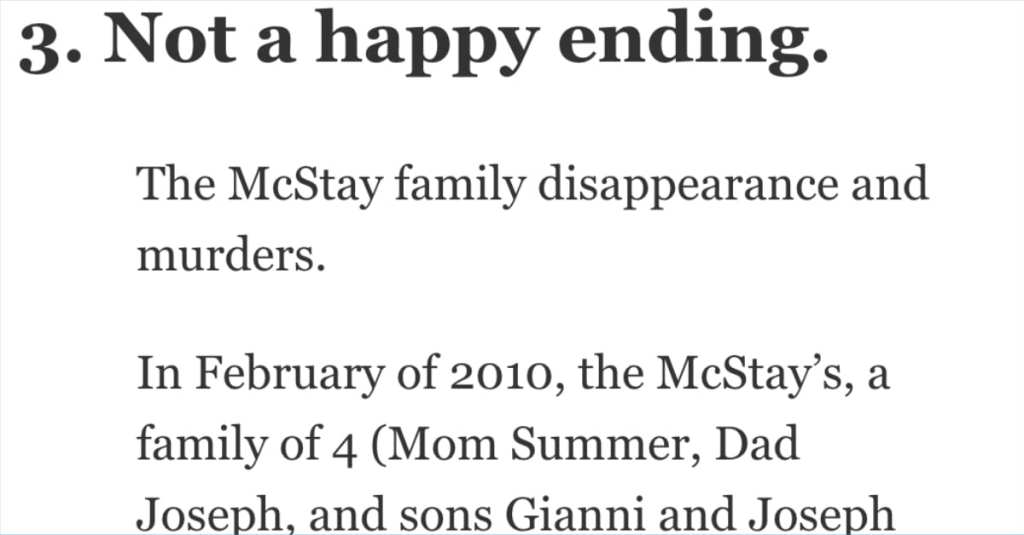 There’s no doubt that people love a good bit of murder and mystery. True crime shows are more popular than ever, and the revival of Unsolved Mysteries on Netflix, along with a bunch of open-ended podcasts, have grabbed the public’s attention and held on.

That said, sometimes it’s nice to know that the mystery has been solved and the person or people responsible have ended up in prison where they belong, right?

If that’s more your jam, here are 14 mysteries made all the better by the fact that we already know whodunnit.

The Siberian craters. As the permafrost melts, the methane gas gets released and it sometimes ignites.

Just went down the rabbit hole and it looks like there are different types of Siberian craters. Batagaika is just a slumping hillside after permafrost melted. Patomskie seems to be gas related but without an explosion. But many others as you mention from gas explosions.

Interestingly these are huge. I expected a car size explosion, but they are hundreds of feet deep.

One think I cant find is the ignition source. What lights the gas?

In January of 1993, a 14 year old girl I went to high school with was abducted on her way to school, murdered, and left nude in a ravine. Her murder went unsolved until 2004, when advances in DNA technology linked her case to a man who was already in prison for killing another woman.

Turns out he was a serial killer who had killed 4 women, some of whom had been raped.

For many years, human feet kept washing up on the shores near Seattle and Vancouver. A total of 21 were found.

Naturally people thought there was a murderer afoot (sorry), and their modus operandi was to cut their victims feet off before disposing of the body in the ocean.

Turns out many of the remains were deemed as suicides.

Turns our when you jump off one of the many bridges Seattle and Vancouver has to offer, your body decomposes, and your limbs detach. The foam and floaty material in the victims shoes ensured their feet would FLOAT and get caught in tidal currants, this dispersing the detached feet nicely.

11. Not exactly a surprise.

The disappearance of Antoine de Saint-Exupery, author of The Little Prince, who was also a French reconnaissance pilot during World War II.

In 1944, he took off on a reconnaissance mission from Corsica and never made it back, and there was never any evidence of what might have happened to him and his plane.

Finally, in 1998, a French fisherman pulled up his net and found wrapped in it a silver bracelet engraved with Saint-Exupery’s name, and in 2004, a diver searched in the area and found the remains of his plane, which had apparently been shot down by a German fighter after all.

Forest Fenn’s hidden treasure chest that he buried years ago and left clues to where to find its location. It was found within the last two years I think

The Case of Adrienne Shelly – screenwriter for Waitress. Husband came home to find her hanging in the shower – ruled suicide.

He insists she was happy and would never kill herself promoting another view of crime scene where they found a shoe print that matched a construction worker in the building.

Sure enough the construction worker went to rob her and thought he killed her so staged a suicide when the hanging ended up being the actual thing that killed her.

There once was an urban legend/conspiracy theory about a video game called “Polybius”. The story goes as such: a mysterious arcade cabinet appeared in Portland Oregon in 1981 with never-before-seen gameplay. It was captivating to the point of addicting, but that’s not all. Many who played the game fell sick or went mad. Some versions of the myth detail that it caused hallucinations and nightmares or drove players to suicide. Every version of the urban legend mentioned mysterious “men in black” who would check on the game every now and then, leading some to believe this was some kind of government psyop to make people go insane.

Several times over the years, it was proven to have not existed, usually by pointing to lack of contemporary media coverage and/or an FOIA request that found no records of such a video game, but this left people unsatisfied. If it truly WERE a psyop, of course these channels would come up blank. It wasn’t until a retro gaming youtuber and journalist called AHOY (who is a god-tier youtuber btw) made a video detailing his investigations. He not only proved it to be false, he found the exact person, place, time, and purpose for which the rumor was created.

6. I want to know what happened.

The Erebus and the Terror were found a few years ago. The two ships were part of an arctic expedition and disappeared 150 years ago.

They had a whole section of the Museum of History in Ottawa for it a few years ago, with some of the remnants of the ship. It was very interesting.

One thing that struck me was for years, the local indigenous population talked about those crazy white guys trying (and failing) to sail through the northwest passage, and ended up resorting to cannibalism in an attempt to survive.

Their stories were ignored for decades, but what do you know, the oral histories ended up being an important part of finding the wreckage, and they found cut marks and evidence of cannibalism on some of the bodies found on King William Island.

5. Not so mysterious after all.

Residents of Windsor (Canada) have been saying they could hear a hum coming from across the river in Detroit for the better part of a few decades.

Well turns out that when a steel producer turned their furnaces off recently (when they were closing up shop) the Hum stopped. People had no idea what the noise could be until the factory closed.

The Sailing Stones of Death Valley.

TL;DR: Rocks would magically move up to 1,500 feet in the desert. Turns out it gets cold & freezes the ground overnight & the rocks would get pushed by the ice sheets that melted under the wind.

In February of 2010, the McStay’s, a family of 4 (Mom Summer, Dad Joseph, and sons Gianni and Joseph Jr) seemingly vanished from their home abruptly.

A carton of eggs was left open on the counter and the family dogs were still outside in the backyard. The scene was eerie, and complicated because the home the McStays lived in was in the process of being renovated- so a “neat and orderly” home wasn’t the norm at this stage.

It appeared there was missing furniture and the usual mess that comes with construction (some freshly painted or redone surfaces mixed with older versions). From the outside- it appeared the family just took off. Neighbor had surveillance that captured what appeared to be the bottom of the family SUV leaving the driveway.

Since they were living in California, the boarder to Mexico wasn’t far and authorities found footage of what appeared to be the McStay’s walking into Mexico with their two little boys in tow. The family SUV was found abandoned in a mall parking lot near the Mexico boarder.

3 years passed before the bodies of the McStay’s were found buried in shallow graves in the California desert. The bodies appeared to be in advanced decomposition and there were signs of blunt force trauma. A sledgehammer was also found buried with one of the bodies. Chase Merritt, a business partner to Joseph McStay, was arrested and charged with their murders on 11/5/2014. His trial was delayed for years until 2019.

He was sentenced to death. Motive- Chase had a gambling addiction and had been and continued embezzling money from the business. His DNA was found in the McStay’s abandoned vehicle. He bludgeoned this beautiful family to death for money.

Late to the party. Q Lazzarus, who recorded the haunting “Goodbye Horses” that was later included in the soundtrack for Silence of the Lambs, was a mystery for many years. It turns out that she recorded exactly two singles, retired from music, and is now a bus driver.

Devil’s Kettle Falls: A stream separates into two sections, one continues normally the other spirals deep into a hole. All sorts of things were thrown down the hole in an effort to discover where the water went. Ping pong balls, various dyes, it was even rumored that someone stuck an old car down there.

Eventually someone came up with a clever idea, they measured the total water flow above and below the falls and discovered they were similar enough to deduce the two streams join back up relatively quickly.

I have room in my life for all mysteries, but there’s definitely more satisfaction in knowing the conclusion!

What’s a mystery you’re glad has been solved? If it’s not on this list we’re all ears in the comments!