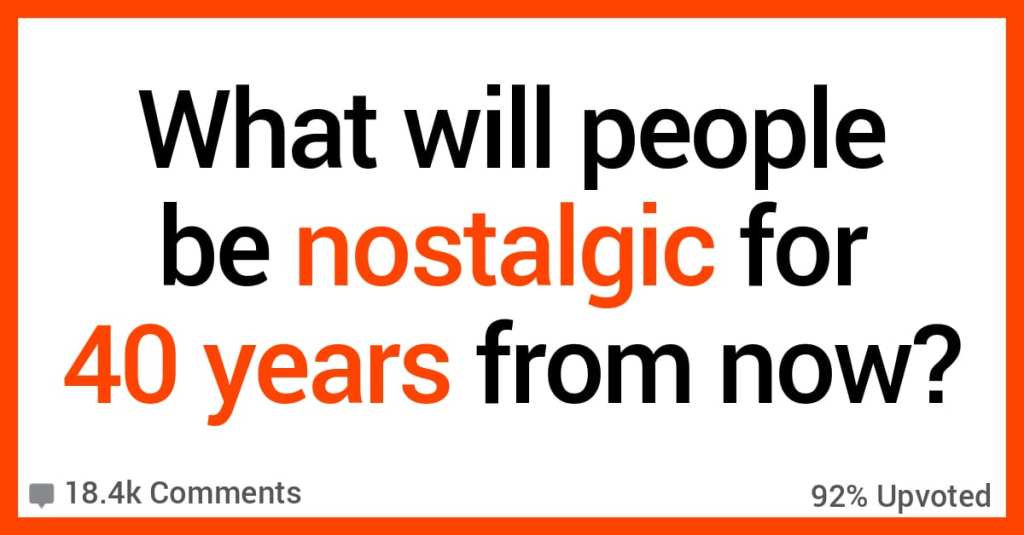 It’s kind of hard to believe that people will be nostalgic for ANYTHING that’s going on in the world right now, but you never know, right…?

I’m sure people in 1980 thought the world was going to Hell in a handbasket, but 40 years later, 1980 probably looks pretty decent to some people…

But what will people be nostalgic for in the year 2060?

“Privacy and the ability to go somewhere without seeing 75 cameras all the time.

Went to the beach today and no one was in the water except for me and my friend. Everyone else was waiting for “golden hour” in their dry beachwear.”

Going to friends’ houses to play basketball/soccer and a few video games, and then have a sleep over.

Socializing to the extent even the youngest here have experienced.”

“The short period of time in 2020 when most of us got to spend some time at home with our families, traffic was bearable, people in the supermarkets were asked to keep distance.

As an introvert, I’m gonna miss it for sure.

“Physical media so you don’t have to micropay for every movie you feel like watching.

When the DVDs and Blu-Rays are no longer in the stores, there will be no reason for streaming services to charge a flat rate.”

Cars will be 100% automated and it will be illegal to drive your own car on roadways unless you have a special license, because it’s so dangerous.

There will be amusement parks where you can drive a car all by yourself.”

It is coming faster than we think.”

“Being able to go “off the grid” for a weekend.

I may have been the only student my senior year of high school and first few weeks of college not to have a cell phone (Out 200+ person freshman engineering 101 intro class, 5 of us didn’t have a cell phone, and the other 4 were from mainland China.

I was the only one who had the access to phones that would work on American cell phone networks but simply didn’t own one) and then had a pay-as-you-go phone mostly for emergencies for the next two years.

It wasn’t until the summer between my sophomore and junior year that I got a phone on a plan, and that was bc I needed it for a job with “on-call” shifts. Even now, I’m on one of the smaller carriers, so when I go camping for a weekend, I’m frequently out of cell phone range when I’m not on the interstate.”

They were already slowly being replaced by self checkouts, and now covid has put a rush on it.”

Rhinos, elephants, orangutans, giraffes. I have little faith that we won’t destroy the world.

Looking at the old onesies from our kids pajamas that we packed in a box showing safari animals will become as extinct as dinosaurs, but more painful…”

Industrial level stepper motors and servos have become so cheap, along side multi core 64 bit control boards, which are so cheap they are essentially disposable, that entire swaths of the labor pool have already been replaced by computers.

The issue here is these incredible control boards are continuing to get better and cheaper, and the software is getting better. Every day the march of technology continues, the closer it comes to replacing Jobs we traditionally think as irreplaceable.

Computers don’t need a break, they rarely make a mistake, and they are cheaper than your labor. We are <10yr from massive disruption in some of the largest employment vectors, like transportation, that is going to put a lot of people out of work.”

They’re the last major chain bookstore, and they’re not doing well. The one where I am is going out of business after 20 years.

There will not be a bookstore in my city. (I’m in a suburb to LA, so not the middle of nowhere.).”

“Someone already said privacy, so I’m gonna go for freedom, it’s basically the same but it’s the effect of the lack of privacy.

People change when they know they are being watched.

This is already happening and will only get worse with time and technological improvement.”

By that time, Musk, Bezos, and god knows who else, will have hundreds of thousands of satellites in orbit.

Our cities will have doubled in size, and urban sprawl will cause further light pollution. Stargazing will be something future generations will only hear stories about…”

Now we want to hear from all the readers out there.

In the comments, tell us what you think people will be nostalgic for in 40 years.