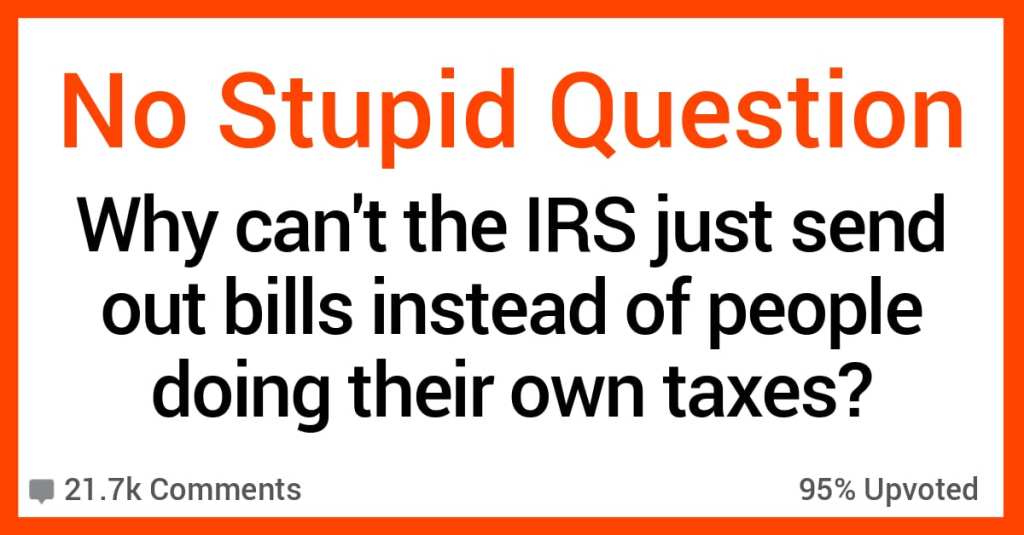 People Speculate About This Question: The IRS Knows What We Owe, So Why Don’t They Send Bills Instead of Making Us Do Taxes?

I feel the sentiment behind this question to the depths of my soul, y’all. I hate doing taxes. Loathe.

As someone who is self-employed, though, I know why the IRS wants us to do our own taxes – they figure we’re going to cop to income they might not know about specifically.

That, or we’re going to report giving income to someone else who doesn’t report it, something like that.

Also, though, they would have no way of knowing about expenses, etc, if we didn’t tell them, but that said, the majority of single income, W2 earners aren’t coming up with any of those surprises.

Here are 17 other reasons the IRS is probably never going to let you out of this chore.

This is one of the few actual answers. Taxes as a way to 1) collect government funds and 2) encourage certain behaviors. The govt wants an educated population. How does the government know how much you spent on education expenses? How does the government know if you gave anything to charity? And on the business side of tax, how do they know how much money a business has come from debt? Companies don’t want to much debt because it makes it more risky, but interest is tax deductible.

You don’t want the government knowing all of your whereabouts. This is how you get government overreach. To ensure that you gave them the correct amount, they do compare it to how much your employers report, but they actually use a statistical method called sampling to randomly (but also not so randomly to the people who are way off) decide whether to send someone to verify of what was reported was correct. The penalties of knowingly lying on your taxes is huge.

Can you get away with not reporting other income? Probably, but in an audit, if this is a large amount that went unreported you are going to have some problems.

Because the tax preparation industry is huge and makes billions of dollars off this system. Everyone of your financial institutions reports your finances to the IRS so yes they already know how much you owe. Ronald Reagan wanted to make file taxes and easy as getting a bill but couldn’t because companies like H & R Block are huge lobbyist.

15. And all trails lead to Washington’s pockets.

To influence tax law by lobbying, implies legislators are willing to be influenced by lobbying, instead of doing their jobs and representing the people.

When are we going to start blaming those legislators?

They don’t know how much you owe.

If you used the correct withholding information, and only had a steady salary that was reported properly – then withholding should have taken enough money.

They probably owe you money, but you have to file to get it back.

13. Because they enjoy the confusion.

Had an old boss who was a prior ordering clerk of some sort in the US Navy. He explained to me many times how they were often required to order compulsory supplies from inter-government agencies that were ridiculously inflated compared to any other private vendor, and a bunch of other things that pointed to it all basically being a giant, cannibalistic method of basically laundering money around the system from within.

This was explained to me at a hazmat job I did for a while, one year as we all waited for the EPA to shake us down like they did every year, despite our following the prior stated rules and regs to the letter, through their purposely vague definitions of some criteria and ability to have changed some written minutiae between visits that there is almost no way to be aware of unless you work for them.

I also worked for the IRS briefly as a CSR during filing seasons, and I can fully confirm that requiring taxpayers to do their own return only results in confusion, mistakes and a shitload of paid government employees.

That would be a while lot easier, but we have a more complex and layered system I guess.
We pay federal income tax, many of us pay state income tax, property owners pay county property taxes, and some of us pay city payroll taxes. When we file, we get credits across some of those different jurisdictions for what we paid. Of course, that’s totally separate from the various excise and sales taxes paid on good or services.

We’ve also got a lot of industry pressure from companies that either hire accountants for tax time (like H&R Block), or that sell software for filing taxes. They are making money by keeping the system complex and inaccessible.

They don’t always know how much you owe. People with really simple taxes, a W-2 and a basic 1099-int, maybe. The gov. generally knows only your income, and then, not always.

They don’t know your deductions and trusting their bill would result in overpayment of taxes, especially if you are involved in any type business, have more complex investments, or use any deductions such as spending on childcare for example.

There are many deductions and credits that the gov’t does not track or know about unless you tell them via filing a tax return.

If the government knows how much I owe.

They know how much your employer reported to you.

​They have no idea what you’re going to claim.

But once you get into anything more sophisticated, there are MANY reasons..

If you don’t file your tax return they will calculate it with their default values and bill you for it.

Since you don’t get any deductions its typically higher than if you filed. If they got rid of the late filing penalties and just sent you the bill then it would basically be what everyone is asking for.

Because TurboTax lobbies to keep the tax system complicated and difficult.

The IRS is legally forbidden from using the information they already have to do your taxes for you, because that’d step on the profits of the tax-prep industry.

7. Some people ruin it for the rest of us.

This is also part of why taxes are so complicated. The more complicated, the more likely you’re going to use those tax services.

Also, some taxes codes are complicated because of thieves trying to find loopholes to not pay their fair share of taxes.

Your answer is write offs. If you track your spending in work related things, they are tax write offs to help you get money back. Any interest paid on a mortgage, vehicle milage for work excluding commute, home office supplies, work clothes, work meals, moving for work, all examples of tax write offs. Generally I have 12k-15k in write offs each year.

If they just sent me a bill or for some, their return, you wouldn’t get to include all your write offs.

All these people saying it’s a scam for H&R block or turbo tax are dead wrong. A vast majority of the country files taxes and uses write offs. Just because the ignorant few aren’t taking advantage of this system, does not make it some big conspiracy.

I’m from Europe and that is how it’s done in every European country.

I am an independent contractor, so there is no way at all the government knows how much I make, let alone my expenses.

They could make predictive calculations based on the industry, but there are probably only a few thousand of us in the US, and incomes vary quite a bit, so I would not like to see their guess.

Even in Greece, the bottom of the barrel, I login into the tax site, and it has already autocompleted everything. I can always do some tweaks if something has changed and slipped through the cracks

Continue with that kind of thinking and you’ll be questioning why we don’t have a fair tax code that forces the highest earners to pay the highest percentage of their earnings in tax!

1. They need you to rat on yourself.

They don’t know how much you owe, they just have a vague idea.

They don’t know if you made income from an alternative source that didn’t show up on a W2 or 1099, and they don’t know what deductions and credits you plan to claim.

Man, I wish there was a way to avoid taxes.

What do you think about this topic? Let us know in the comments!