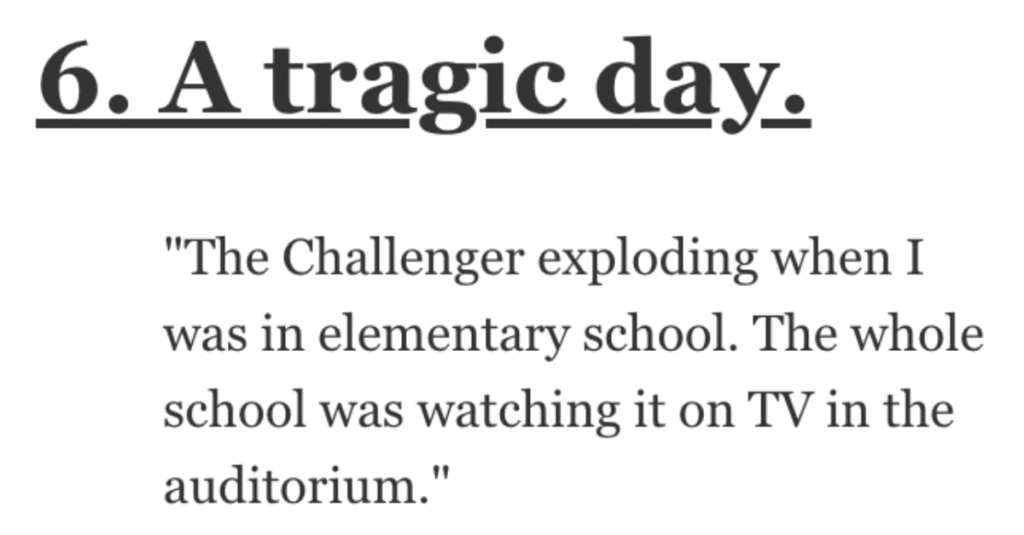 I remember some of my friends talking about watching the second plane crash into the World Trade Center live on September 11, 2001, but I missed it that morning.

I can’t imagine what was going through the heads of the folks who happened to be watching TV live on that day. Of course, we all saw what happened later, but to see it live must have been terrifying.

Here are some interesting stories from AskReddit users about the weirdest and wildest things they’ve seen unfold on live television.

“When I was around 7 years old in Panama City, Florida two teenagers hacked into the local news feed.

We were in the living room watching the news and it started to break up and then went to snow. Before my dad could get up to mess with the rabbit ears, the signal resolved to show two kids in a bedroom looking at something off screen, then they looked at the camera.

Once they realized they were on live TV, they started screaming and hugging each other and jumping around yelling ‘we did it! WE DID IT! AAHHHHHHH!”

After a few seconds the signal resolved and went back to the newscaster who apologized for the disruption. Then they just went back to reporting the news like nothing happened.”

“After Hurricane Katrina the people stuck in NO at the stadium and gathered on a freeway overpass dying of thirst and hungry as hell.

News saying the government didn’t know where people were so they couldn’t drop food and water. Was surreal because the news crews literally had the people on tv with captions of their locations but nope, both local and federal government couldn’t figure it out.”

“When I was a kid TV shows were interrupted all the time for high speed chases and police standoffs.

One time a helicopter was tracking a guy who was driving through a field. The driver hopped out of his van(?) with a shotgun. The reporter was telling the helicopter to pan away from the shot but they didn’t.

The driver then put the shotgun in his mouth and blew his head off on live TV. The camera cut and came back to the in studio reporter who had a defeated wtf look on his face.

I swear this led to less situations like this being shown on TV.”

“That time Randy Johnson vaporized a bird with his pitch.

I was at a sports bar with my parents and half paying attention to the game when I saw the ball explode into a big poof of feathers.”

I will never forget the look on Mike Myers’ face.”

“The Challenger exploding when I was in elementary school.

The whole school was watching it on TV in the auditorium.”

“When I was a kid I was watching the news and saw some people in Sarajevo (I think?) being pulled off the back of a truck and shot. Teenage boys and men.

Never forgot it. It was daytime and I think it might have been live, the BBC or something but it has stayed with me ever since.”

“In the 1990s, MTV was on in the background, and Downtown Julie Brown was hosting some sort of pool party weekend thing.

They were going to commercial, so as she was talking to the camera, saying what was going to be going on after the commercial, some dude started getting closer, and started grinding up against her.

Just as she was done, and before they cut to the commercial, she pushed the dude off her and she yelled “Get the F*CK off of me!””

“When Henry Surtees was hit and killed by a wheel mid-race in the Formula 2, it just happened so quickly you couldn’t process what you’d actually seen.

Felipe Massa’s accident at Hungary GP in the 00’s, you just saw a flash of something then he was nose-first in the tire barrier with the accelerator still depressed.

He eventually recovered but his eyebrow never moved again!”

“I swear I’ve seen it but I’ve never found it again.

David Letterman was hosting the Tonight Show and he had a pair of ferrets on his desk. The zoo guy was talking about them and they freaked out and started running around his desk. Their leash got caught in the microphone so they started going in circles, defecating the whole time, even splashing David.

They went to commercial and afterwards the ferrets were gone and David was cleaned up. I had never laughed so hard.”

“An NHL game and one player fell and his skate cut the jugular of his opponent.

Blood squirted out like a hose, staining the ice, sending him immediately to the locker room and a full recovery was had.”

“I saw the Max Headroom signal intrusion the night it happened, I was hanging with some friends smoking hash and watching Doctor Who.

It was so bizarre and we were so high that we weren’t even sure we had actually seen it until a couple days later when it started showing up in the news.”

“The LA riots were really brutal to watch on television. They tried to not show any graphic violence but sometimes it just happened. You saw a lot of footage of people looting and running up and down streets throwing things and hitting people but nothing really bad until those men caught Reginald Denney stranded in his truck at an intersection.

They smashed the truck windows and dragged him by his hair, I think, out of the truck and just stomped the ever loving crap out of him and the camera never moved. It was a news helicopter shooting down so you could see the entire intersection and it legitimately looked like you were seeing a man beaten to death right on television.

And then when you thought it was over there was that kick and you just knew he was dead. You just knew no one could survive that and it was so upsetting and terrifying to see that kind of unbridled violence take place live right in front of you.

And then came the helpers. A few men, one of them a very large black man came to Denney’s rescue and the attackers scattered like stray, vicious dogs and they helped Denney. They saved his life.

It was only a few minutes but until 9/11 it was one of the most dramatic things I’d ever seen on television.”

“The Hillsborough football stadium disaster in 1989.

96 people crushed to death against the metal fence surrounding a football pitch. All live on National TV. And the cameras kept rolling all the way through.

Have you ever seen anything weird or unprecedented unfold on live TV?

If so, please tell us about it in the comments.