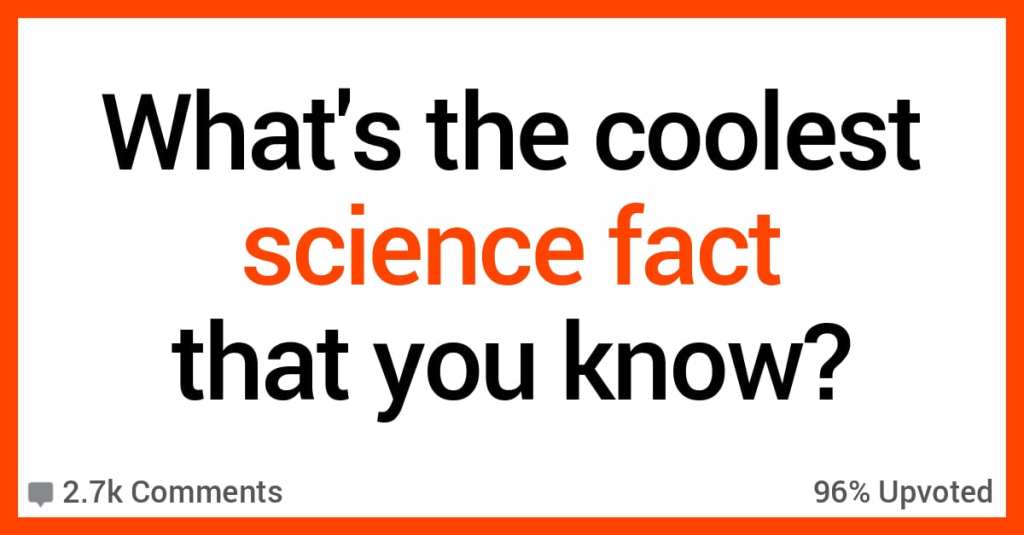 People Talk About Interesting Science Facts That They Know

No, I don’t mean that in a bad way, I’m actually pretty jealous of folks who are smart about science.

I couldn’t tell you the difference between a proton, a neutron, or an electron. It all just boggles my mind.

But that’s all about to change RIGHT NOW!

Because folks on AskReddit were nice enough to share really cool science facts. Let’s see what they had to say!

“Carrots were bred into being orange.

They were originally purple and much harder, more like an uncooked yam.”

2. Thank goodness for that.

“You don’t swallow when you’re asleep.

Your salivary glands slow waaay down so you don’t drown in your own spit.”

“Female tortoises can keep sperm healthy in their body for up to 20 years, so they can choose the proper and safe moment to get their eggs fertilized.”

“The calcium in your bones, the iron in your blood, just about everything in you other than hydrogen was fused together in a massive star that exploded.

And now you, a clump of these atoms, is contemplating this fact.”

“Spiders do not have muscles.

They move around by pumping their blood throughout their body/legs much like hydrolics on a car!”

“The average kangaroo can jump higher than the average house.

I’ll lay another science fact down as well. The average house can’t jump.”

“You can tell if it’s above or below 14°F outside by walking on snow.

If the snow squeaks underfoot, it’s below 14°F.”

“The human body can be drained of blood in 8.6 seconds given adequate vacuuming systems.”

“There’s a strong correlation between gum disease/gingivitis and Alzheimer’s disease.

“99.9 percent of the atom is empty space. If the nucleus of an atom is a size of a basketball then the electron would be around 2 miles away… everything in between is empty space.

Also, our science books never showed us about the distances and why things appear to be solid if 99 percent of atoms content is just empty space”

“A better metaphor for the human brain than a computer would be a giant, electric, meat mushroom. It grows and behaves a lot more like a fungus.

This is why I’m not worried about “neural uplinks” anytime soon. We needed a biopunk craze. The cyberpunk craze has just made us depressed that we’ll never get s*x robots that love us back.”

“The nearest galaxy (Andromeda) is so far away that if you started traveling at the speed of light toward it on the day you were born, you would die of old age before you got there.”

“We don’t know the true size of giant and colossal squids but estimated on the squid beaks (that looks like huge parrot beaks) we found in sperm whale stomachs (who actively hunt squids (it’s not a deep sea rivalry how it’s often depicted)) they can possibly grow up to 20 meters long.

All giant squids we found were dying squids, that’s why they are so close to the surface of the ocean. They are not made for the low pressure in the upper oceans but for the pressure in 1.500-2.500 meters.

You can see that they are dying because of the white spots on their skin. Like other squids they can change color and the white is those cells that change color dying.

In 1941 the British transport ship Britannia was sunk by the german cruiser Thor. The crew had to wait several hours to get rescued. A few crewmen saved themself on a floating piece of wood.

All of them reported how one of their mates got pulled into the depth by a giant squid. After that the squid returned a few times but I can’t remember if he took another man with him. This isn’t the only giant squid attack on humans we know of.

And lastly: squids and octopuses don’t get old. They only live for about two years. That’s why they can’t exploit their intelligence like we can. We get old enough to have wisdom and share this wisdom, they can’t become wise because of their short lives.”

What random science facts do you know?