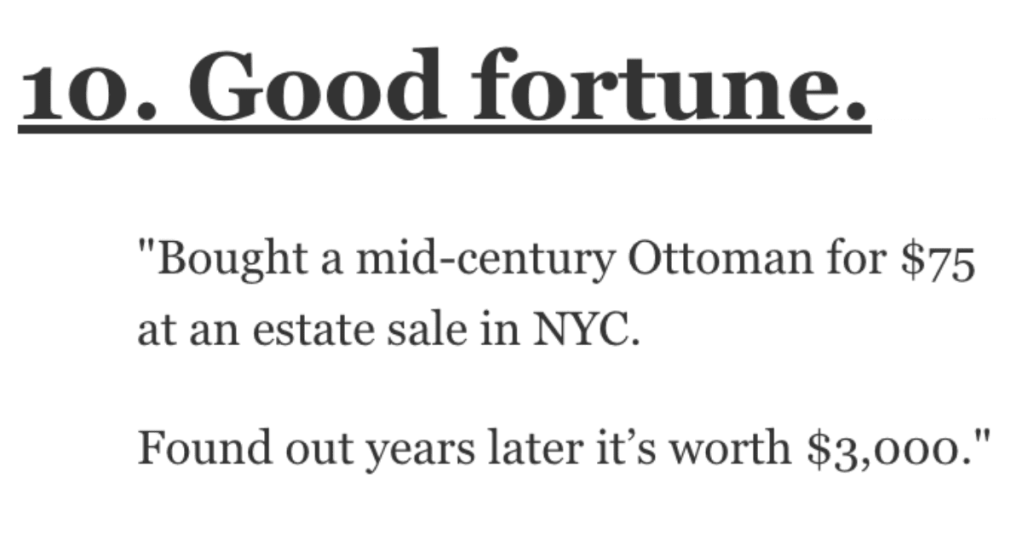 I think we’ve all fantasized about finding some discovered item that we rush home with under our coat and, once safely at home, we examine it and discover that it’s something worth a lot of dough.

It’s never happened to me, but I think I still have some time to get lucky…

Here are some stories from some folks on AskReddit who found “junk” that turned out to be worth something.

“I found a small envelope with a few inches of wire in a junk shop.

Bought it (US$2) because it had some faded penciling about troy oz. Turned out to about 1.5 troy ounces of platinum wire.

“Years ago I bought a condo in foreclosure.

We couldn’t go inside, just look from outside and put in a bid. My bid won. When I went inside the place it was pretty trashed. I checked all the rooms, calculating the costs of getting it back into shape.

At the end of my walk thru I went into the garage and saw there was a car under a tarp. Hmmm …

I pulled the tarp back and saw a 1972 Barracuda in nearly mint condition.”

“A first or second edition of the Oregon Trail book.

It’s a bit damaged, so not that valuable, but still a few hundred more than the $15 I paid for it.”

“Found a “fake” Cartier watch in Goodwill for $10.

Bought it because it still looked nice. But it’s a real Cartier watch and it’s worth $1000+.

Keeping it because I’d never buy myself something like that.”

“Dad carried around a junk guitar for 50 years.

Ugly as hell sunburst Gibson acoustic (circa 50’s or 60’s can’t remember) that he eventually sanded down into something prettier. When I was learning he took it to be tuned up by our neighbor who owned a shop and was a collector.

Dude came back exasperated and told us that my dad had sanded about 50k off the guitar, and that it would have been totally worthless if he hadn’t left the logo on.”

“Old folded up piece of paper in the bottom of a box my dad had I found cleaning up the house, torn up and faded.

“Someone gave me a hideous purse out of a box on its way to goodwill.

“I was at an estate sale and bought a few paintings sweet lady told me to take the last one I liked as package deal since I ran out of cash.

Turns out one of them is a pretty rare original print worth about $3,500 and I paid maybe 30$ for all 4 prints and paintings I wanted.”

“I found a book at a trash bin. The Wind in the Willows I never got to read it as a kid.

After finishing it I googled the edition date turns out its a collectible worth $300… Who knew?”

“Bought a mid-century Ottoman for $75 at an estate sale in NYC.

“So my mom and I were helping a family friend deep clean the house to sell. (Not rich, but not poor) Well I found these cool colorful sketch-style art prints all rolled up in a corner of his shop, he told us that we could keep them, since he wasn’t much of an art guy.

Turns out the signatures on the prints was Dali. I had been to a Dali and Picasso exhibit in Rome, so I recognized the signature.

We had them appraised, they were worth quite a bit. Out of respect we told the guy who gave them to us. He asked for them back and then he ghosted us with the prints. We aren’t in touch with him anymore. Never found out what happened with them.”

“When I was nine or ten years old, I found some metal clips and a brooch while playing in some old ruins. Since our city has been there since Roman times, it was obvious that it might be really old. But usually, that stuff isn’t worth much.

Showed it to the archeologists at the local museum and turned out it was gold. Everything. They asked where I found that, excavated the area (again) and found quite the stash of fine Terra Sigillata with coins and jewelry in it.

I was allowed ro keep three things and I chose a perfectly preserved dinner plate, a ring and a coin.”

“Found an old box under some insulation in my new house’s attic, opened it out of morbid interest and found a sega with a handul of games.

Out of the love of mine i contacted the old owners (i guessed they might love theirs like i do mine) they were so ecstatic to have it back.

Turns out that it was their sons, they had lost him when he was 8 and that sega plus a handful of other things were all they had left.

Might not have been worth loads of money but was definitely more valuable to them than any amount of gold.”

“When I was 17, I found a driver’s license on the ground from a guy who was 22 and resembled me a fair bit.

Rarely had a problem getting into bars or clubs with it. It was priceless.”

Have ever discovered what looked like a piece of junk but it turned out to be valuable?

If so, please share your story with us in the comments.