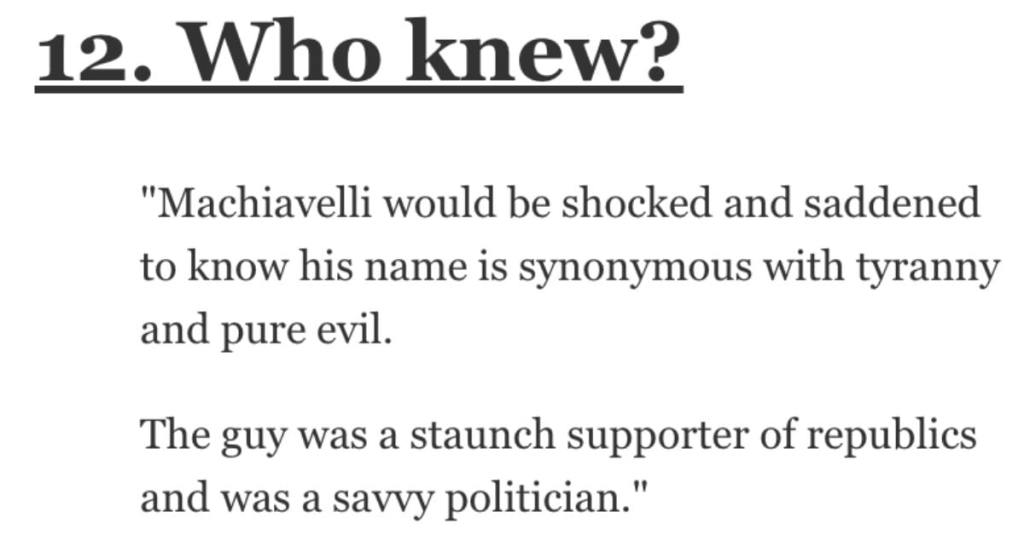 Well, this should be interesting…

People view history and historical figures through their own lens and sometimes they believe that the books just got it all wrong and kids have been learning the wrong facts and stories for decades and centuries.

Of course, what we’re about to read are only the opinions of certain individuals out there, but maybe it’ll spark an interest in you to dive a little deeper into certain stories or people.

Let’s dig in to some answers from some folks on AskReddit.

“Despite what was portrayed in Amadeus, and though in reality they were musical rivals, Antonio Salieri was actually friends with Wolfgang Mozart.

In fact, years after Mozart’s death, Salieri assisted with and helped finance his son Franz Xaver’s musical education as a tribute to his late friend.”

“That Roman that gave Jesus vinegar to drink.

Turns out that the Roman military gave their soldiers a water/vinegar mix to drink as it was good for refilling salt levels after sweating.

That means all the roman did was give Jesus a sip of his own drink, not force him to drink vinegar as punishment/insult.”

“A more modern example is the lady that famously sued McDonalds for their coffee being too hot in 1994.

That lawsuit gets treated as an example of how oversaturated America is with litigation over small things. As it turns out, however, her situation was extremely justified. She suffered third degree burns that required skin grafting and had permanent disfigurement.

Her labia fused together. Needless to say, McDonalds was serving their coffee far too hot and the case very well may have prevented future similar incidents.”

Hell of a smear campaign his enemies did. Most likely brought upon himself because of his intolerance to the Senates’ corruption and/or lack of effectiveness. The crazy stories? Most likely made up or were a willful misrepresentation of something Caligula said.

The story about him making his horse consul because he was “crazy”?

Misrepresentation of him mocking the senate by telling them his horse could do a better job.”

“Neville Chamberlain was widely hated in the UK after Britain went to war with Germany because of his policy of appeasement towards the Nazi-run Germany when he was Prime Minister.

Even being one of the central people who allowed Germany to annex Czechoslovakia, which blew up in his face when the Germans invaded Poland and triggered the Second World War.

He was forced to resign as Prime Minister less than a year into the war due to revolt from the Labour and Liberal parties and handed the reigns over to Winston Churchill, who was himself forced out of office after the first war because of fears that Germany would re-arm.

However, due to British laws about disclosing classified documents thirty years after their being sealed, it emerged that Britain couldn’t risk Germany’s anger during the Czech debacle as they were thoroughly unprepared for war.

Chamberlain delayed the inevitable which gave the allies a significant helping hand when the war finally did happen.”

Some scholars say that the truth of the claims made against her can’t be verified or debunked at this point.

But there’s good reason to believe that her being painted as a mass murderer was part of a smear campaign and political plot to usurp her land and power since she was from an extremely powerful family tied to Polish royalty and the King of Hungary owed a large debt to the Bathory family (which was canceled in exchange for not putting her on trial).”

“Marie Antoinette, the woman was a spoiled rich girl sure, but the whole country condemned her despite the fact her husband was and always had been the one in charge of things.”

Got blamed for the 1918 pandemic because they were the only country honestly reporting on it. Other countries did not want to look weak during WWI and wouldn’t report on it.

Turned out that a farm in Kansas and possibly the French trenches were the actual origin.”

His presidency is known for being pretty crummy, but the truth is that he had no experience in politics and was easily manipulated. Corruption was rampant under his presidency because people took advantage of how he saw the best in people.

He was a great General that was essential in the Civil War, but was also smeared throughout his life. Lost causers labeled him as a butcher and a drunk, when the truth is that he really just did the best job he could (although he did have a problem with alcohol, it was greatly exaggerated.)”

His administration was very corrupt, he was pretty immoral, and there were some policy mishaps, all of which have put him on many lists of “worst presidents ever.”

His administration also reversed many of the authoritarian policies of President Wilson. He liberalized the economy (Wilson had imposed many controls during the war), allowing recovery and a boom to emerge from a major recession. He issued pardons for political prisoners like Eugene V. Debs, who had been jailed for protesting World War One.

While Wilson, a notorious racist, had moved towards segregating the civil service, Harding moved back towards integration and tried to hire more African-Americans. He lobbied for a federal anti-lynching bill to let agencies like the FBI go after the Klan.

He also arranged a formal peace treaty with Germany, since the Senate wouldn’t ratify Versailles but Wilson wouldn’t propose anything but Versailles. His rather humble philosophy on the role and character of the presidency is also refreshing when compared to the messianism that infects the office today as it had under Wilson.

Despite the scandals that rocked his presidency, he was incredibly popular at the time, and for good reason!”

The bad guy from Robin Hood was basically the steward of a kingdom his beloved brother hadn’t even set foot on. While Richard the Lionheart was faffing about in the Crusades, John was running the kingdom and turning it into something that could sustain itself.

While he was doing that, his useless brother gets his *ss kidnapped so John has to raise taxes (cue Robin Hood) to bring back the “rightful” king the people loved so much.

So basically, Prince John runs England for his brother and people love his brother for it. Then said brother gets kidnapped so John Raises taxes to get him “back” and becomes the bad guy in the eyes of the lords (and by extension the people) who want their rightful king back.

The man eventually does become the rightful king, only to have all the lords hate him for the crime of investing money into the kingdom, as a result he signs the Magna Carta, limiting royal power.

that said he wasn’t a saint. The man did have a hand in the collapse of Norman France and wasted a lot of money and men trying reclaim the region. I’m not trying to say he was a “good guy” per se, just not the bad guy for what people hate him for.”

“Machiavelli would be shocked and saddened to know his name is synonymous with tyranny and pure evil.

The guy was a staunch supporter of republics and was a savvy politician.”

“Billy the Kid wasn’t a good guy by any means, but was a victim of negative propaganda by the press at the time. He was orphaned in his early teens and fell in with the wrong crowd.

After a brief run in with the law (I think he was lookout for a small robbery, wasn’t even part of the main crew) he didn’t want to wait around 6 months or a year for a judge to make their way to the tiny little town, so he escaped jail and ran. What teenager would act differently? He ran to Arizona looking for work.

In Arizona he found work, but was still one of the youngest there. A bully in a bar picked on him for weeks until Billy got fed up and shot him. On the run again he goes back to New Mexico.

In New Mexico he resorts to stealing to be able to survive. He steals some horses from a prominent rancher. Instead of prosecuting him, the rancher hires him. Billy is thrilled, and works hard. He is happy because he has a legit job again.

The rancher had a corrupt as sh*t rival who had the local law in his pocket (he was related to the sheriff). The rival rancher killed Billy’s boss in the street. Billy and his fellow cowboys that loved their boss decided this was not OK, and the Lincoln County War started. Billy is the only one of the men on his side of the war to have been in every battle.

Eventually, Billy felt he had accomplished his revenge mission, so he settled down with his best gal. Problem was, she was Mexican, and he was white. His girlfriend’s brother didn’t like Billy being with his sister, so he tipped off the law as to where Billy was hiding.

The Lincoln county sheriff showed up in the middle of the night and shot Billy in the back.

There is a lot more to it. For example, when Billy was in Lincoln County jail, he talked to the New Mexico Territory Governor. The Governor promised him a complete pardon if he’d be a witness in the trials of the people from the corrupt rancher. Billy agreed and testified. The governor then went back on his promise and left Billy to rot.

So Billy killed the jailers and fled again. That governor was too busy getting an ambassadorship and writing the book Ben Hur to keep his promises.”

“More so sports history, but the film Cinderella Man portrayed boxer Max Baer as a murderous psychopath who gladly killed two fighters in the ring.

In reality, he was personally devastated by these deaths.

In the one he was most directly responsible for, he ended up giving his winnings from his next few fights to the fighters family.”

Who do you think are some “bad guys” from history that may have gotten a bad rap?