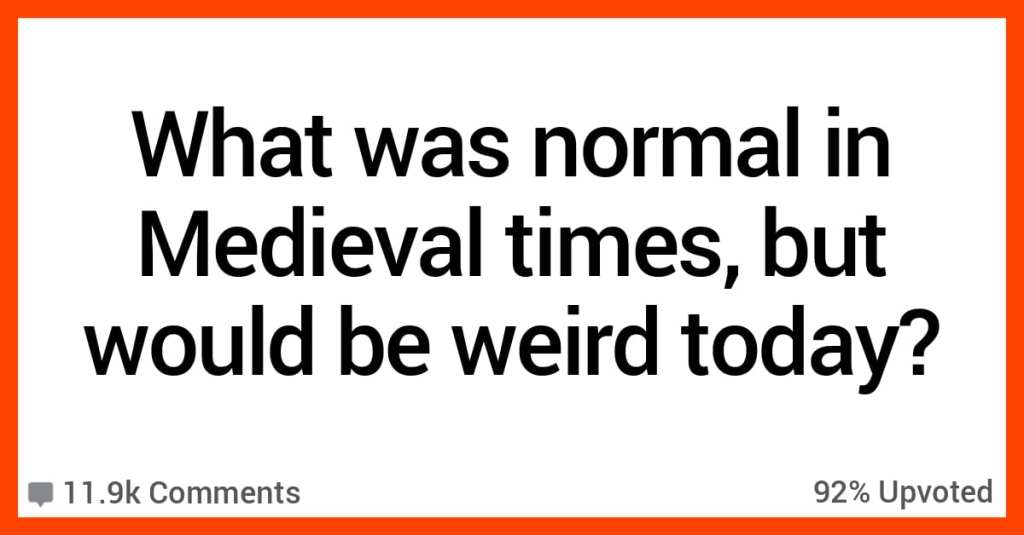 If you haven’t seen the classic comedy The Cable Guy, the sentence above probably won’t make a lot of sense to you. But if you have, you remember that one of the funniest scenes in the movie takes place in a Medieval Times restaurant. Check it out if you haven’t, okay?

ANYWAY, we’re about to get into some interesting observations from folks who talked about what would have been normal in Medieval times but would be weird today.

Not on the same scale as they were in Rome, but it was still pretty common to have a bathhouse in medieval Germany and surrounding places to bathe in a group in a large tub of hot, fragrant water, called a “Zuberbad” in German.

Now everyone’s all hung up nudity. even among friends, so it’s way less common (although you can still enjoy a public Zuber bath at medieval markets and renaissance fairs in Germanic countries).”

2. All kinds of weird stuff.

Marrying second cousins. When nobody travels and villages are small… it’s pretty much unavoidable.

Huge age disparities between husband and wife, both of whom are getting married for the first time.

Paying different taxes based on religion.”

“The whole family waking up at midnight to drink and bullsh*t for an hour or two before going back to bed.”

“Pouring the chamber pots out of the window into the street.”

“From an American context (and possibly other places too idk), the amount of time off work in Medieval times would be utterly bizarre compared to now. The idea that the peasantry toiled dawn to dusk in the fields before dying of exhaustion and plague at age 45 is incorrect.

Farmers worked the land when it needed work, and the calendar dictates that schedule. Festivals, harvest, Religious holidays, and every day life took up more time than work did. We’ve disillusioned ourselves into thinking that our ancestors lived to work so we should too.”

Basically a large pot would always be simmering and food would be tossed in before spoiling. So it was just a large vat of everything simmering nonstop.”

“Drinking in the morning and throughout the day. This was typically very low percentage ale and was mostly a way to purify water and be able to drink it safely. Likewise this was before tea and coffee existed so acted as a pep to start your day.

Pubs were actually worried when coffee started being introduced as it was cutting into customers who would come in to drink in the morning.”

“Stopping on a road way or camping within a certain distance of a roadway was illegal and was enough justification to kill them on sight.”

Cloaks are so freakin cool but they went out of style. I wish they weren’t weird today and so rare.

Cloaks are so freakin amazing.”

“Women would be walled-up in a church.

They would literally be bricked in to a wall with small slots to receive food, communion, remove waste, and because they were considered holy, dispense advice.”

“Cleaning your dishes with grass and ash.

“I read a book from the 1930’s about life in Medieval England, one of the thing that really stuck out was the level of animal cruelty, and I don’t just mean beasts of burden and what not.

In one section on the types of games played at fairs there was one for example which involved tying a Rooster to a peg and then the contestants took turns throwing stones at it, whoever killed it was the winner.

Bear baiting, bull baiting and baiting just about any kind of animal, usually ending in it being killed was the height of wholesome fun.”

“Inheriting clothes being a big deal.

Things weren’t really disposable back then – people wore, turned, refreshed, re-sewed, cut down and re-sewed, stripped into trimming and then into rags every piece of clothing they owned. There was a thriving second hand market, and a lot of money in carefully re-using good bits of cloth, cutting off worn out buttonholes and re-sewing garments, re-using trim, etc.

Even the upperclass did this to an extent, you had to get to ridiculously wealthy Royalty level for clothing to be abundant and completely new all the time. You rarely find whole garments in archeological digs, but you find all sorts of bits and pieces that were cut off an otherwise whole garment.

This was because making cloth was insanely time consuming, especially in the earlier periods when the primary looms were upright and sheep weren’t yet fully modernized and produced smaller amounts of wool, of various qualities. Linen was even more time consuming, cotton wasn’t a thing yet (and cotton is seriously annoying to process by hand), and silk was out of reach for most people.

So, people willed cloth to relatives when they died, as well as specific garments. These days you sell off all Grandma’s old WalMart clothes, or sometimes get some cool vintage stuff you wear occasionally, but back then getting a few ells of worsted wool cloth was a huge score.

There are garments that were passed down several times, because they were just that valuable – and clothes show up in the wills of people from many different classes. It was entirely normal for your daughter to be wearing a dress made from her great-grandmother’s old overgown that had been willed down through the family and the good cloth re-purposed until it was only fit for rags. There were whole industries devoted to re-finishing cloth that had gotten a bit worn so new garments could be sewn from it.

Imagine today getting excited because your Aunt died and left you four pairs of jeans. But, in the Medieval period, that would have been a truly great score of an inheritence.”

Now we want to hear from the history buffs out there.

In the comments, share some more things that would be normal in Medieval times but would be totally weird now.