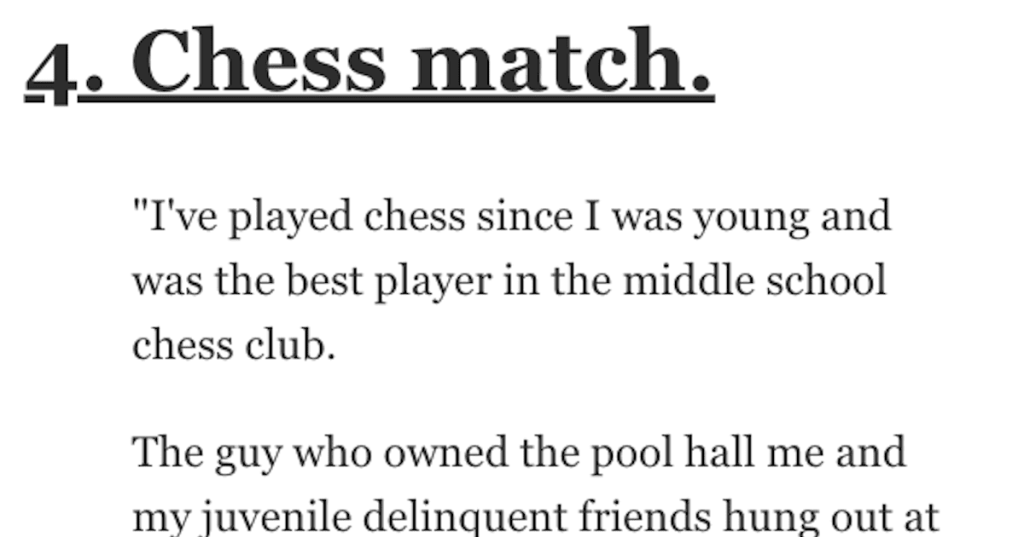 Have you ever bit off more than you can chew with someone? If so, you know that it’s never a good feeling when a person who is highly skilled at one specific thing rubs it in your face and makes you look like an idiot in front of a group of people?

Or, maybe the opposite thing happened and YOU were the one who was an expert at something and you got to throw it in someone’s face?

Do these situations sound familiar?

Let’s see what AskReddit users had to say.

Carnie running the fencing game picks me out of the crowd for being tall, and challenges me to a free bout against “The Master”.

Not a lot of people fence, so his gambit probably worked most of the time, but when he handed me that saber, I handed him his *ss.”

“A guy from work challenged me to a tennis match.

He must’ve been a hotshot back in his day and tbf as far as mid 40’s go he wasn’t bad.

“Went to a couples night once and the guy had wall to wall movies and framed posters in his basement, super into it.

Mentioned I used to be a movie nerd but not so much anymore. He challenged us to a movie trivia board game, kinda in a condescending way and I tried to politely decline but my gf insisted we play.

They went first, missed the question then we ran the table. Never heard from them again.”

“I’ve played chess since I was young and was the best player in the middle school chess club.

The guy who owned the pool hall me and my juvenile delinquent friends hung out at was talking about how dumb kids are these days and said nobody in my group of hoodlums could play chess.

I beat him soundly, then again in the rematch.”

“I have perfect pitch.

It’s not a thing I can turn off, notes simply ARE a pitch clear as day, much like how red is clearly distinct from green.

Any who, music class in junior high. Teacher explains that Mozart had perfect pitch and walks over to the piano, plays a note and says “and just by hearing it, he’d be able to tell you what now that was… now can any of YOU do that?”

At the time, I honestly had no idea this was rare. Raise hand, teacher with a smug look points and me and is gobsmacked when I answer correctly with note and octave. Figures it’s pure luck so does it again and asks me to face the other way. I answer correctly again.

Tries it with chords, sequences and two hands worth of notes. Still right every time. Ends with me playing back a short sequence after listening to it blind.

That day, I learned that perfect pitch is actually kind of rare.”

“My father in law challenged me about the capabilities of DVD. Specifically he claimed that you could only have widescreen video (not 4:3) on a DVD disc.

At the time I was employed as a DVD author. I authored the very first commercially available feature on Scenarist. I am literally acknowledged in the first edition of “DVD Demystified” as an expert. I had already by that time personally authored literally hundreds of DVD’s with 4:3 video.

He knew all of the above at the time, yet still insisted I was wrong.”

I am an infectious disease expert (PhD from a Microbiology and Immunology program) and suddenly all my former high school classmates think they know more than me.

They watch the news and learn a new vocabulary, and they bestow themselves a doctorate.”

“I used to play fighting games competitively all over the world. Never made one of the top slots but I could usually hold my own. One of my best game was Super Street Fighter 2.

Went to a bar by work one day and they just so happened to have an SNES set up with SF2. I order a drink, pick random characters and just f*ck around for a bit. Some guy comes in and immediately starts bragging to his date that he’s the best SF2 player ever.

I asked him to play some games against me and offered to buy him a drink if he could beat 2 out of 3. Twelve games later I am completed hammered and he finally gives up and leaves.

9. I bet this happens all the time.

“So it’s the Saturday after Thanksgiving a few years ago and I’m out with one of my old college friends and her extended family. We had just graduated the year before.

We post up at a bar outside for the game, everyone’s pleasantly mid-afternoon buzzed. Her uncle, whom I hadn’t met previously, asked what I do. I hated answering this question in 2017, especially with middle-aged adults, because they would invariably try to start something.

At the time, I worked at an immigration law firm. Predictably, as soon as I tell him this, he asks what I think about the wall, etc. I give him my usual answer “bipartisan immigration reform, Gang of Eight, etc.” He tells me not to give him the rehearsed crap, he wants to hear what I really think. I say Oh I don’t really want to get into it, let’s enjoy the game.”

But he keeps pushing and I’ve had a couple beers, so against my better judgment, I engage. This maybe 50 year old man becomes FURIOUS as the discussion carries on because I keep citing court cases and how our immigration system actually works.

The kicker is at one point he says “Just because you have all these statistics and citations doesn’t mean you know any better than me.” I just gave up and got another beer after that.”

“Not me but my friend used to ride a unicycle as a kid. He worked construction and they were working at a house that had an old unicycle

The other workers tried riding it and immediately fell off. My friend walked over to it and inspected the unicycle like it was the first time he ever saw one them said it didn’t look that difficult.

They all laughed at him and he said he thought he could ride it. Eventually one of them bet him $100 he couldn’t ride it. He jumped on it and immediately rode down the street.”

“When we were having a couple drinks on friday after work, I was challenged to a shooting, by a colleague. Little did he know I’ve been shooting air rifles competitively ever since I was thirteen.

Not to say I am the greatest, but I’ve made it to the national finals for my country multiple times, and came third and sixth. I have all the special clothes and gear and such you need to make it to such a level.

The next day, saturday, we showed up to the range i always shoot at. Its not a day I usually train so not many people recognize me. I beat his *ss left right and center that day. Out of 600 points, he scored about 200-250 if i remember correctly. I got about 580 which was about average of what I used to shoot.

He had to buy me a fancy bottle of whisky and now we shoot every two or three weeks together. Fun times.”

“Far from an expert. Far from proficient.

It works. It always works.”

I’m a software engineer and at the time I had just finished an enterprise email delivery system (like an in-house Constant Contact). I knew the rules of the CAN-SPAM Act by heart. I KNEW exactly how their system worked.

So this real b*tch of a property manager said “I know how email works. You wouldn’t understand.” I mentally did the arrogant knuckle crack and started to explain – very methodically – how email delivery works and how they’d track various actions.

I spent about five minutes detailing my credentials and why I was absolutely certain they had never sent me the emails they alleged I received. When I was finished, the HOA board just agreed to waive the fines.”

If so, please tell us about it in the comments.