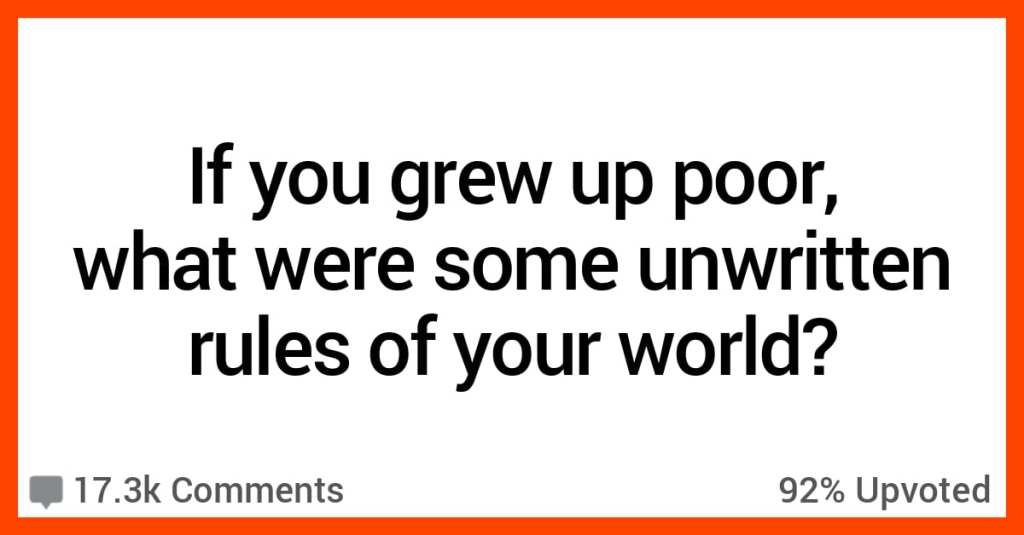 If you didn’t grow up poor, there’s no way to ever really know what it’s like.

If you did grow up poor, then it’s almost like you’re part of a club.

Everyone understands you, and if you’re part of it, you also understand these 16 social norms that go beyond the average attempts to always pinch a penny.

16. Maybe it was about bonding.

i lived in a place with bitter winters. while the thermostat at school and other public spaces was turned up past 70 degrees F, my home was always around 60 degrees, sometimes dropping to the 50s.

we’d offset the low temperature by sleeping with multiple blankets and wearing layers upon layers, sometimes even wearing snow pants around the house and to bed.

15. Leftovers are the rule.

To this day I am still confused by people who seem to hate leftovers. It comes up a lot when theres a discussion on whether it’s cheaper to cook vs eat out. People who find it expensive to cook want to something fresh and brand new every day. Whereas I’ll make a lasagne, about 6 portions, freeze it and have it whenever during the week/month.

It confuses me even more when that person is British considering how popular premade frozen food is here, and how many people find themselves at Frankie and Benny’s (probably our version of Olive Garden) or TGI Fridays.

I understand that cooking takes time and effort which is why it doesnt make sense to me to throw away leftovers or not make a little bit extra.

In the UK- do not answer the door. Do not answer the phone. When the man is looking through the window, make sure you can’t be seen. Do not tell anyone who knocks on the door where the parents work.

This turned out to be doorstep lenders like Provident- no idea how they are still around these days.

We were very poor growing up. You never ate the last of anything without asking first. Portions were small and limited. When I was 11 I was invited over to a then friend’s house. I was floored by their house and furnishings. Very opulent compared to mine.

Lunch time came. Her mom had set the table for sandwiches. Everything laid out, 3 different breads, all sorts of meats, condiments and fruit. At my house lunch was a sandwich with white day old bread with peanut butter and jelly. Sometimes we would have those land o frost thin sliced meats. We were only allowed 2 slices of the meat per sandwich.

So, at this friends house, I make my sandwich with one slice of ham because it was way thicker then the stuff at home. The mom kinda freaks out…”what kind of sandwich is that? You need to put more on it, thats not enough.” I explain that’s what we do at home. They were horrified. Ended up sending me home with a “care package” of food.

My parents never let me go to her house again because they were embarrassed I told them we were poor.

12. The effects are lingering.

In the UK too, and this was a nightmare for me when I was a kid. Parents used to work and kid-me always cowered in fear whenever ‘the man’ came around and knocked. I still remember the way his shadow moved against the curtains. I was convinced he would get in and drag me to court because my dad owed someone money.

Adult-me, doesn’t owe anyone a damn thing but I still get anxious when there’s a knock on the door or when the phone rings and I don’t recognise the number.

My father was constantly driving these two things into my head since I was old enough to remember: 1). Hard Work will set you free 2). You WILL NOT get anyone pregnant.

The pregnancy thing was totally about shame. He grew up in the deep south with a Baptist preacher father. My father was around 6-7 in the early 1950’s when his oldest brother (15) got a girl (18) in the church preggo. The resulting shame and shunning from the community that ensued drove my father’s mother to suicide. I’m sure to some degree, he blames his current life on the pregnancy that he had nothing to do with.

(USA) my parents worked and were usually home about an hour or so after my elementary school got out. We lived around the corner and down the way, like… less than one km, probably half a mile or so… anyway, I had a cell phone to call when I got home.

I was prepped with “do NOT answer the door for ANYONE. Not your grandpa, not your uncle, not our friends, your friends, mailman, NO ONE. not the police or fire department UNLESS the house is already on FIRE.”

I never opened the door for anyone. If I knew who they were, I would shout through the paned window overlooking the porch. But even then, that was rare, I usually just stayed out of sight.

I also ALWAYS keep my front door locked now too. And if I’m not expecting someone, I don’t answer the door if I’m home alone. I also have a big dog with a big bark.

We weren’t allowed to do any kind of extracurricular activities. So, no instruments, no joining any kind of sports or girl scouts or anything that required an upfront investment for uniforms or the season. Walmart shoes.

My dad once said I wasn’t really in need of glasses, that I just wanted to look like all my four eyed friends? lol (spoiler alert, totally needed them)

Leave the TV on when you leave the house.

When someone calls, your parents are “in the shower” and you’re able to take a message.

You are perpetually young. Going to a movie? Only during matinee showings AND you are 12 years old until you’re 16. At a restaurant, you’re also 9 forever.

Going to fast food (with any adult), you only order off of the dollar menu.

Generous borrowing and “burning” culture. Everything you own is available to be borrowed by other poor people. My family had an extensive movie collection (especially when we could record movies from cable to VHS tapes), and our neighborhood friends were welcome to borrow what they needed. Games, movies, CDs. We swapped and borrowed a lot. Often times, it was only long enough to burn a copy to have for oneself.

The extra curriculars one cuts deep. I grew up as one of the poorer kids in a pretty wealthy area and after school everyone else would be being shuttled around to all these extra curriculars and tutoring whereas I’d just be always only going home.

If someone buys you food at a restaurant order as cheaply as possible even if they tell you order whatever you want. Used to get death glares from parents if I ordered something 10 bucks or over at a place where average prices was 10 bucks.

If you can get a burger and fries for 8 you better be eating a burger.

5. Keep your wants to yourself.

Don’t ask for anything because you won’t get it.

4. There are many good values learned.

Being raised by a single mother, she instilled the belief that school went elementary, middle, high, then college. There wasn’t a question as to whether or not college was optional. She did everything in her power to raise two boys to live more successful lives.

My brother and I both graduated college and graduate studies (MA) and our starting jobs were both with salaries that were over double what my mom made. Growing up I wish things where different but as an adult, I cherish the values and experiences instilled by my mom.

3. You should be ashamed.

Don’t talk to anyone about it. Its shameful. Me and my sibling weren’t allowed to wnjoy free breakfast programs for kids living in poverty that our schools hosted because it embarrassed my family. Granted we grew up not just poor but abused so that played into it.

It was normal for money we got for Christmas, birthdays, and (from ages 14 and up) jobs to go to our parents for food and rent. Things did get better when we started working but as the family was doomed to fail due to abuse when we inevitably left at 18 and our parents divorced it left us with nothing. Working four years living at home and none of us were able to save money or go to post secondary until years later.

If we were upset about contributing we were deemed selfish and accused of not caring about family.

I can’t comprehend buying expensive clothes and even cheaper clothes I need to get on sale.

Getting only one new school outfit a year as a kid makes me appreciate being able to buy clothes now but paying a lot for one item still doesn’t make sense.

1. That must have been rough.

A/C was only for company. I lived in S. Florida and didn’t know I could use the air conditioner without having someone over until I moved out of my parents home.

I would never have guessed some of these and they make me angry.

If you grew up poor, add your recollection to the list down in the comments!