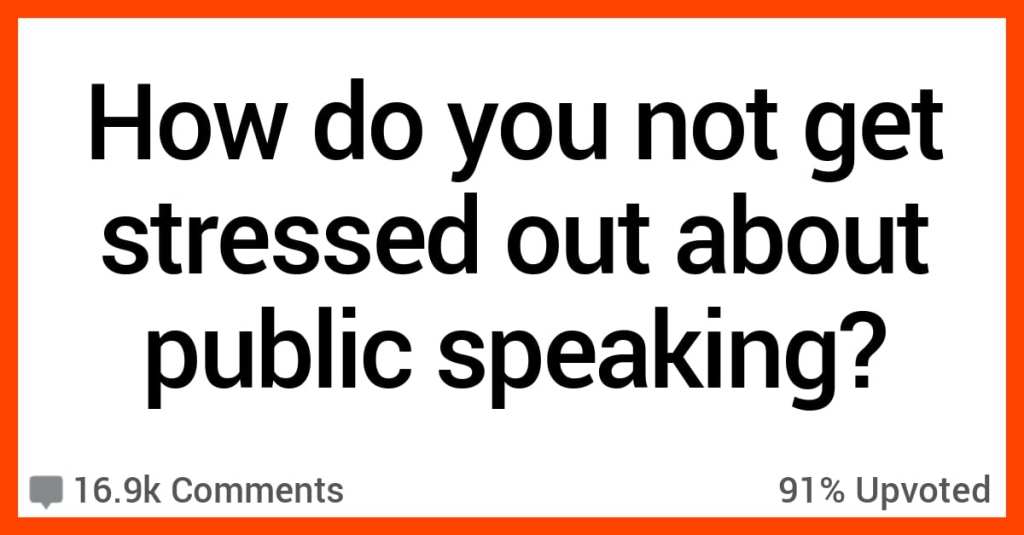 People Who Have No Problem With Public Speaking Share Their Secrets

We’re all wired differently when it comes to public speaking.

Some people don’t mind at all and are as cool as a cucumber, and others lose sleep for weeks and almost have a nervous breakdown.

I fall into the second category…but I think I’ve gotten a little bit better over the years.

How do you not get stressed while speaking in public?

“I used to be super nervous about presenting or speaking. When I was a young adult, I had some serious social anxiety.

Then I became a teacher for adult recreational classes in my field, which involves speaking in front of a group of 10 people every week. After a while, it became normal. Now when I have to present things to a bigger audience, it doesn’t bother me.

Sometimes my work involves dealing with strangers and crowds all day, and that doesn’t bother me anymore either.”

“It’s freeing knowing that no one actually gives a s**t.

It makes me feel more likely to go out there and try and make it enjoyable for people!

It’s okay to even acknowledge, “Yeah, I’m actually a little bit nervous! But y’all seem like nice folks!” To break the ice and be honest.”

“I just say f**k it. What happens happens.

It helps that I have enough self confidence to either do well in something or make up for it later.

The make up for it later part is key because you can be a bumbling idiot and still ask, what do I need to do to make up for this? And then do it as they told you to do it.”

Think the listeners are stupid and won’t notice any mistakes.

Sounds rude, but it works.”

It sounds like a cliche answer but it’s so true.

If I’m giving a presentation, I run through it at least once daily for the entire week leading up to it.”

“I just pick one person in the audience to speak to.

I pretend that person asked me to explain whatever I’m talking about. It usually helps if the person is already a friend or someone I find attractive.

I find it easy to talk confidently about a particular subject to a friend.

If I choose an attractive audience member I speak like I am on a date (I annunciate more clearly, not afraid to sidetrack to smaller subjects that help explain the broader subject in turn, and I have motivation to impress them).

All of this being said, this does not mean I only make eye contact with the one person.”

“It helps me thinking that other people (including the audience in front of me) isn’t perfect.

So why should they expect me to be so?

I am doing my job to my best extent and think myself: “deal with it.””

What will happen if you fail or don’t do insanely good. Nothing… Your life is not in danger. There will be food on your table.

You might waste same time but if you are reasonable prepared the consequences are small and you can only disappointed yourself.”

“Honestly, it is just experience.

Speaking in front of people used to scare the hell out of me. Well, I became a tutor for my college and was paid $6/hr to tutor other students 1 on 1.

Well, the tutoring center wanted to start kind of a group tutoring concept for core classes. I was asked to tutor Chemistry and I would have multiple kids in there. For this, I would be paid $9/hr. Hell Yeah!!!!

Well, the room I was assigned was a large lecture hall…should’ve been a red flag, but I was going to make $9/hr!!!!

I get there with no idea WTF to expect, I had no plan. I’m expecting a few kids, maybe a dozen. Kids start showing up, and the room fills…and fills….and fills. I don’t recall how many students showed up for my tutoring session, but it was well over 100….$9/hr didn’t seem so good anymore…

Well, I had no idea what to do so I ask for questions and eventually it began to develop its own flow….. I come to find out later that the Chemistry Professors offered kids something like 5 extra points on their final grade if they showed up to my tutoring sessions….figured that out when kids started asking me how I was taking attendance so they could prove they were there…

Anyway, after that I realized some things about public speaking.

If I am being asked to speak, chances are I am thought of as an expert. People are there to listen to my thoughts.

Preparation is important. If I am able, I write a speech or presentation word for word as well as make an outline of taking subjects. I practice reading the speech word for word and review my outline.

After that, I can either use the speech I wrote or I have researched the topic enough I can basically freestyle my speech using the outline to keep me on point.

You often will have that one asshole who likes to make others look bad by asking obscure or difficult questions. To deal with them, I most often use the phrase “You know, that is an excellent question. I have to look into that and get back to do. Please give me your email at the end!”

Usually the nod will stroke their ego enough to get them to shut up. If they keep asking dumb s**t, their coworkers will usually glare at them and set them straight.

Stories are usually helpful. Why’d I share my story above? Because it helps you relate to what I faced. It kind of makes a person say “Holy S**t, that was probably frightening as hell” but at the same time give a hint that one can make it through it.

When people’s eyes are glazing over and jumping out the window begins to sound like a better option than listening to me, I’ll give a Cliff’s Notes (are they still a thing?) version of what I was going to say and get the f**k off stage.”

“Bring this attitude with you: you do not owe anybody s**t.

Get up there, say whatever you intended to say. That’s it.

Doesn’t matter; you do not owe them s**t. Just do what you intend to do.

The reason we get nervous, I think, is because we’re so worried about how we’re perceived. Because we think the audience deserves something. They don’t. You don’t owe the audience s**t.

This one works wonders from me.”

“Couple of things that worked really well for me:

Dressing up. At least personally, when I throw on a suit and tie, I feel unstoppable. Knowing that I at least look nice can take the edge off the fear of not doing well.

If you can, try to memorize (or at least be VERY familiar) with the first paragraph or so of your speech. Maybe you don’t have time to prep for the whole thing, but if you can start off strong, you’ll feel a lot more comfortable for the rest of the speech (plus you’ll have made a good impression on the crowd already). (Note cards help)

Take some time and watch some TED talks on YouTube. Find somebody who’s presenting style you vibe with, then try to model your style after them.

Don’t be afraid to admit if you don’t know something. If your presentation has a Q/A and you get asked a difficult question, it’s WAY better to just say “I’ll look into this and get back to you with an answer” then to just flounder and try to BS something.

If you have any public speaking tips, we’d love to hear them.