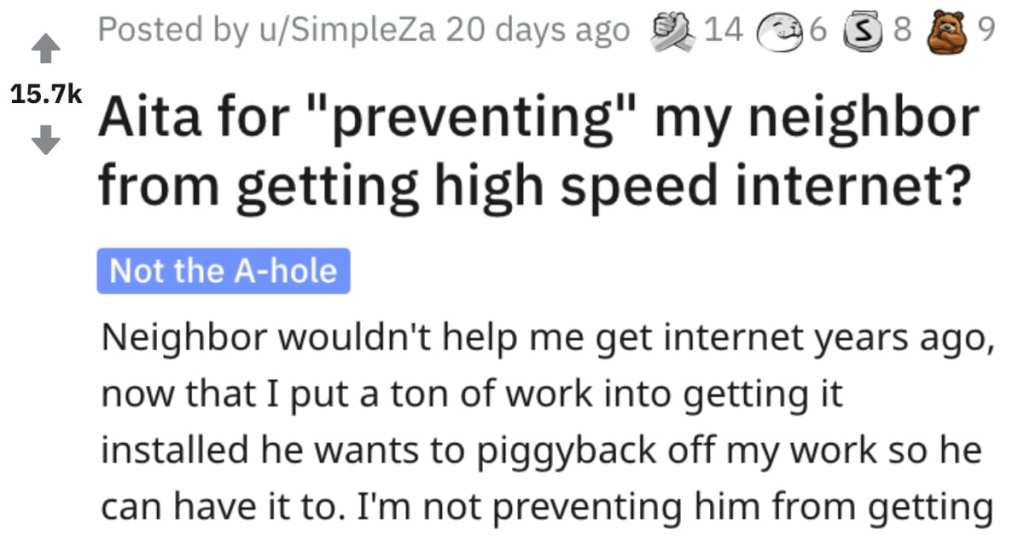 I guess it depends on who you talk to…

But I don’t think the folks in this story from Reddit’s “Am I the *sshole?” page are feeling much love for each other at all.

AITA for “preventing” my neighbor from getting high speed internet?

“Neighbor wouldn’t help me get internet years ago, now that I put a ton of work into getting it installed he wants to piggyback off my work so he can have it to. I’m not preventing him from getting cable, I’m just not letting him use my lines.

So I recently got high-speed internet to my house after not having it for nearly a decade. I live in an area that has multiple options for broadband, but my house sits back about a mile off the public road, so most utilities need to be hard lined to work.

Despite living on a large piece of property, my one and only neighbor is about 800ft away from, due to the original owners being family members and wanting their homes to be semi close.

We get along, but don’t interact much. They have done some things that I consider rude, but they seem like generally OK people.

When I first moved in, I worked a deal out with our local internet provider to run a mainline to my home, if I could get the neighbor to sign up as well. Reason for that, is they allow a certain allowance per customer for construction costs, and with 2 of us, the total was high enough to cover everything.

Now there is no contract, so they could cancel after the first month, and I offered to pay for their services for the first 3 months as a thank you. They declined and said they were happy with dsl. I explained they didn’t have to get rid of anything, I just needed them to allow the line to be ran underground, and sign on for a month minimum, and I’d cover it. Still no.

We planned on buying a new house eventually so I never had it installed as I didn’t want to pay. With everything going on, and working from home, I finally worked a deal out, that if I did some of the construction, they would cover any extra costs for the installation.

Now my neighbor sees what’s going on, and comes to ask about our new internet provider. I explained what I had to go through and that he could do the same if he wanted.

Next thing I know, an installer is knocking on my door letting my know he’s going to lay cable across my driveway temporarily, and that they’ll need to dig it up to go across permanently.

I asked what he was talking about, and he said he was installing cable for the neighbor. I said “no you’re not, not from my property anyway.”

Now the neighbor is begging me to give them an easement for his cable drop.

I said no for 2 reasons. 1. You screwed me years ago when I wanted cable originally, 2. I really don’t want them digging into the driveway or having to mow around a wire on the yard all summer.

I admit I’m being petty, but I don’t think I’m an AH. I mentioned it to a friend, and they went off about how everyone in struggling and that I should be a good neighbor and to stop being a spiteful AH.

This person doesn’t think the individual who wrote the post is in the wrong at all and argues that the original offer was a fair one. 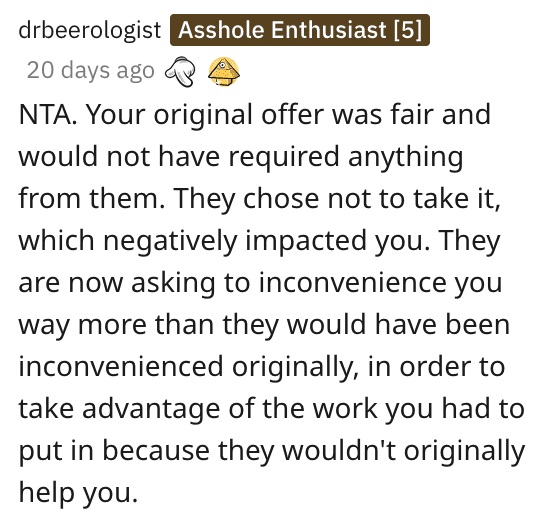 Another reader agreed: the person put out a good offer and the neighbor refused. Time to move on… 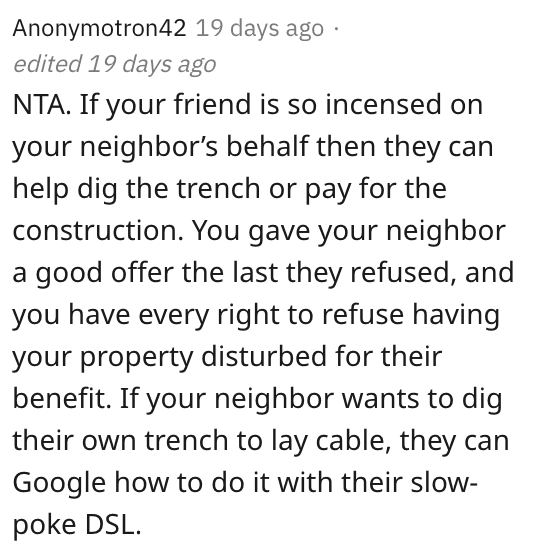 This Reddit user said the person is not an *sshole but points out that maybe the neighbor doesn’t really understand all the ins and outs of the offer. Something to think about… 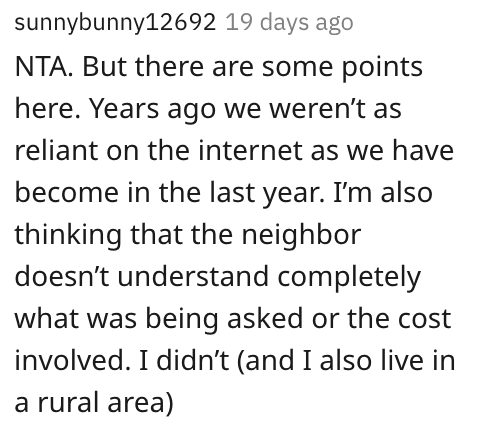 Another reader said that the original offer to the neighbor was a good one that they refused and then they decided to be selfish about the whole situation. 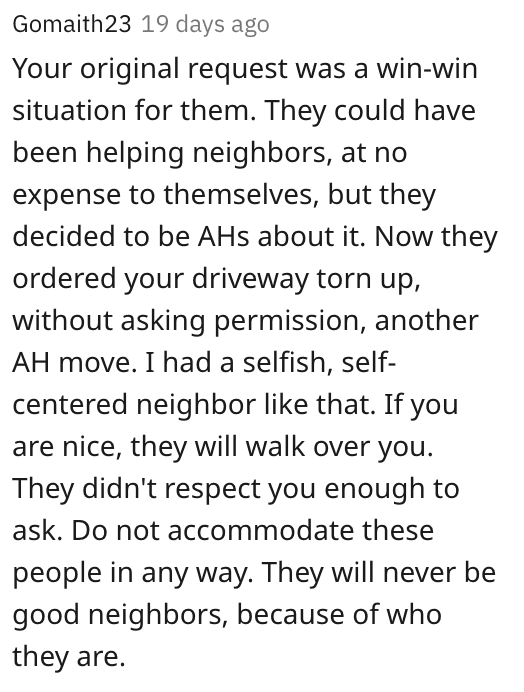 And finally, this Reddit user said that this story reminds her of an important lesson learned from a children’s book. 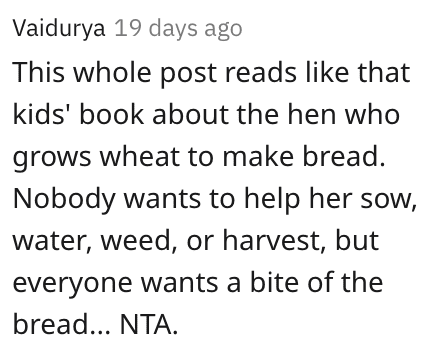 Was this person wrong for treating their neighbor this way?