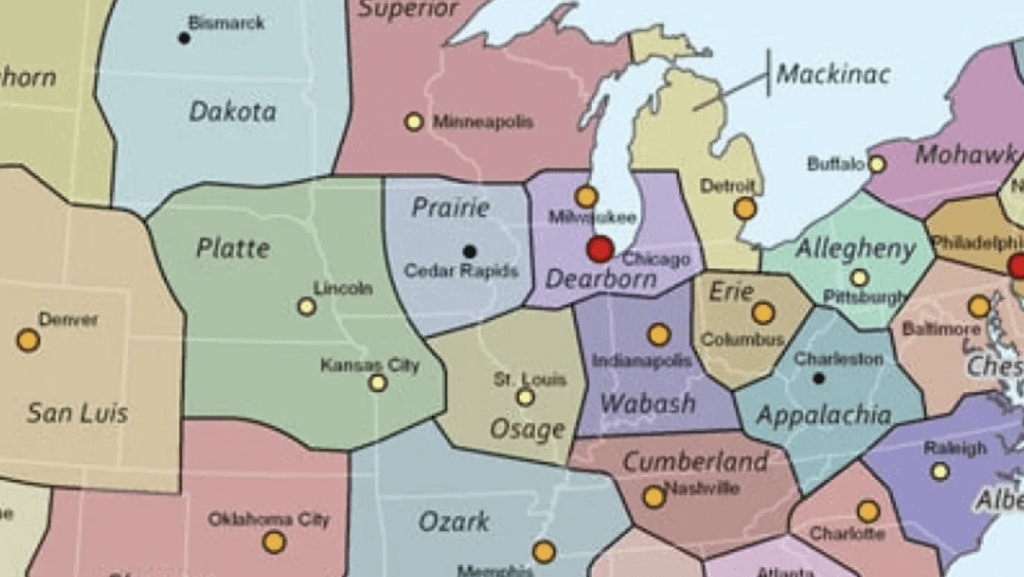 Imagine if We Only Had 38 States: The Argument for Why Things Would Be Better

Imagine, if you can, a United States map that only contains 38 states.

Map of the Day: The Proposed 38 States of America https://t.co/TiHMbMM2U9 pic.twitter.com/amSAN5UkFg

There are actual reasons and benefits to the suggested changes, first proposed in 1973 by California State University geography professor George Etzel Pearcy.

See, the way things stand, states with too many big cities and/or large population centers mean too much strain on a state’s tax dollars. In his revised map, states were redrawn to adjust the number of people dependent on each state, therefore relieving some of that strain.

Why the need for a new map? Pearcy states that many of the early surveys that drew up our boundaries were done while the areas were scarcely populated. Thus, it was convenient to determine boundaries by using the land’s physical features, such as rivers and mountain ranges, or by using a simple system of latitude and longitude…. The practicality of old established State lines is questionable in light of America’s ever-growing cities and the increasing mobility of its citizens. Metropolitan New York, for example, stretches into 2 adjacent States. Other city populations which cross State lines are Washington, D.C., St. Louis, Chicago, and Kansas City. The “straddling” of State lines causes economic and political problems. Who should pay for a rapid transit system in St. Louis? Only those citizens within the boundaries of Missouri, or all residents of St. Louis’s metropolitan area, including those who reach over into the State of Illinois?…

When Pearcy realigned the U.S., he gave high priority to population density, location of cities, lines of transportation, land relief, and size and shape of individual States.  Whenever possible lines are located in less populated areas. In the West, the desert, semidesert, or mountainous areas provided an easy method for division. In the East, however, where areas of scarce population are harder to determine, Pearcy drew lines “trying to avoid the thicker clusters of settlement.”  Each major city which fell into the “straddling” category is neatly tucked within the boundaries of a new State. Pearcy tried to place a major metropolitan area in the center of each State. St. Louis is in the center of the State of Osage, Chicago is centered in the State of Dearborn. When this method proved impossible, as with coastal Los Angeles, the city is still located so as to be easily accessible from all parts of the State…

As you can see, he proposed renaming the new states based on natural geologic features or the region’s cultural history.

Though the proposal had a large amount of support from economists, geographers, and even a few politicians, it lost steam once it reached Washington. With all of the complications sure to ensue – re-surveying the land, setting up new voter districts, new taxation infrastructure – it’s not hard to guess why this very good idea never made it to the table.

As a once or future citizen of the great state of Platte, I’m not sure how I feel about that. You?