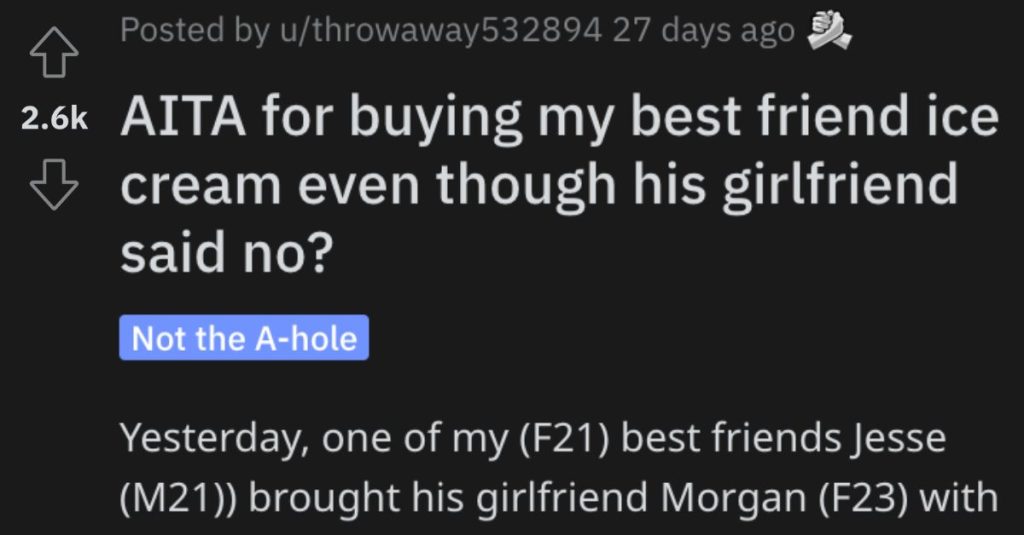 She Bought Her Best Friend Ice Cream Even Know His GF Told Her Not To. Is She Wrong?

I’d venture to say that everyone does…so why can’t people just enjoy it?

Well, some people just like to make life as complicated as possible, don’t they?

Check out this story and see if you think this woman was out of line for buying her friend ice cream…after his girlfriend told him not to.

AITA for buying my best friend ice cream even though his girlfriend said no?

“Yesterday, one of my (F21) best friends Jesse (M21)) brought his girlfriend Morgan (F23) with to hang with our friend group.

For context, I’ve known Jesse since we were in third grade, and Jesse met Morgan two years ago, and they’ve been dating for a year now. In high school, Morgan was admittedly not very popular, as he was known as the scrawny nerd then. Or at least that’s what he says, but I told him I thought he was just socially awkward at worst.

A year and a half ago, Jesse decided he was done with all that and started working out. The dude made impressive progress, as he’s decently lean now, especially with his arms and chest popping, and I’m really proud of the dude. So are all our other friends.

As for Morgan, I’ve never really had an issue with her. She’s never really struck me as the jealous or toxic type, and as long as Jesse’s happy with her, I’m happy. Morgan takes fitness pretty seriously, and Jesse told me Morgan kinda helped train and educate him at points on his exercise and diet journey. That includes Morgan helping meal prep for the both of them. I know they lift weights 6 days and cardio once a week.

Anyway, Jesse, Morgan, and four friends (3 guys and 1 other girl) and I went out to go see Thor 4 and we went to Coldstone afterward. As my friends and I started ordering, Jesse poutingly looked at the ice cream.

He smiled as he whined to Morgan that he wished he could have some ice cream. Morgan smiled back and said “Same here babe. But we can’t, it’s legit terrible for our gains,” kissing him on the cheek afterward. I turned around and said Jesse should be able to have some ice cream if he wanted.

Morgan looked a little taken aback and gently said she knew what she was talking about with this, and to please not interfere with Jesse’s progress. I was honestly very shocked by how Morgan responded, but wanting to avoid drama, I turned back around.

At the table, we were eating our ice cream, and Morgan went to the bathroom at one point. Having known Jesse since we were 8, I could tell he was disappointed about not getting any ice cream. I was like f**k it and I went to go buy him a mint chip cone. Jesse looked really flattered, and thanked me for it, saying I didn’t need to do that.

He still looked reluctant to take it, and when Morgan came out, she was p**sed. She accused me of violating boundaries and saying that I shouldn’t have gotten Jesse ice cream after it was explicitly stated that they were both trying to be healthy and follow a routine.

I said an ice cream cone every once in a while won’t kill gains, but Morgan said I was talking out of my a**. Jesse took Morgan out of the parlor before things could escalate, and my other friends thought Morgan was lowkey acting like a psycho.

That night, Jesse texted me saying he personally wasn’t upset about the whole thing, but Morgan was really p**sed with me. I don’t see what I did wrong, I just got Jesse some ice cream. Maybe I disrespected their dietary goals, idk. AITA?”

Now take a look at how Reddit users responded.

This reader said that all things considered, she’s NTA. 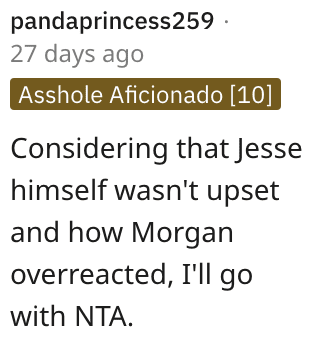 Another Reddit user agreed and said this guy is getting set up to have a terrible relationship with food. 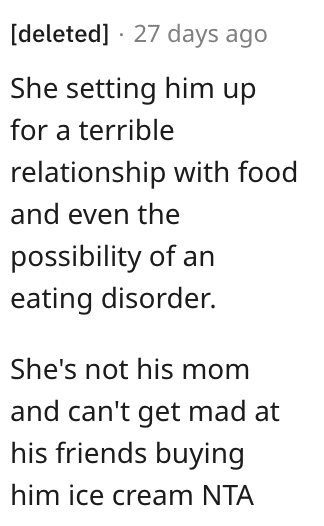 And this individual said this is clearly not a healthy relationship.