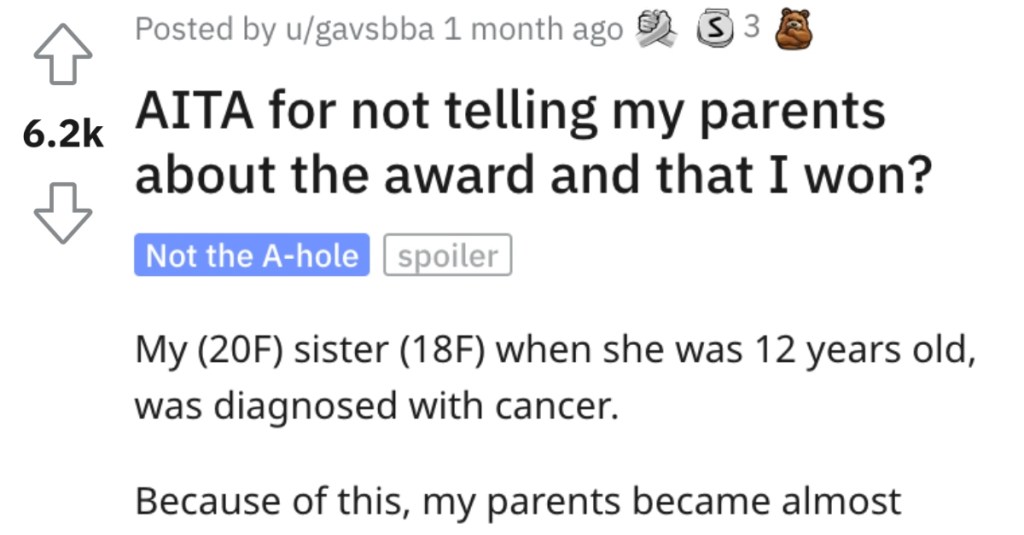 She Didn’t Tell Her Parents About the Award She Won. Is She Wrong?

It sounds like something fishy is going on here…

Because who doesn’t want to tell their parents about an award they won, no matter how old they are?

Check out this woman’s story below and get all the details.

AITA for not telling my parents about the award that I won?

Because of this, my parents became almost completely absent from my life, as my sister spent a lot of time in the hospital or undergoing chemotherapy. So 70% of the time I was alone or just being ignored.

My sister was cured of cancer at 15 and things are back to “normal”.

My parents, always absent in my life for everything (not just school), interfered with our relationship. In those 3 years, they never knew my grade, any game I played, anything related to me , if I showed up with blue hair, they wouldn’t notice at that time (and I tried so hard to get their attention for 5 minutes, but eventually just gave up. It’s ok, they were focused on my sister and I get it, but yeah, I created a life independent of them.

My parents even tried to get closer and we have a closer relationship, but it was never really the same. I don’t have a close relationship with my sister because we don’t get along so well. But even so, they never expressed an explicit interest in what I do.

I managed to get into college. Currently I still live with them, but I intend to move by July next year. I pay rent and for my share on the bill, groceries etc.

Recently my scientific work in college competed for an award at the state level and I was super happy.

The award did not take place in person and it was by zoom, I ended up winning (it was on a Wednesday).

On Friday, me, my boyfriend and friends went to celebrate for dinner.

My boyfriend and friend posted things congratulating me.

On Saturday, before I went to work, my parents* came to talk to me, asking about the award and if I had really won, when I confirmed it, they started asking how I didn’t invite them to see the award and how I could hide something so good.

I just replied that I didn’t think they would mind honestly. They started complaining, but I said I had to work.

Later, my sister texted me saying that I broke our parents’ hearts by saying that and that I was really punishing them for something in the past that they couldn’t help themselves.

My parents are distant from me and my sister is still calling me an a**hole.

They never really showed interest in my stuff or asked anything (even after) which doesn’t happen with my sister.

Check out what Reddit users had to say about this.

One person said she’s NTA and that this might be a wake-up call for her parents. 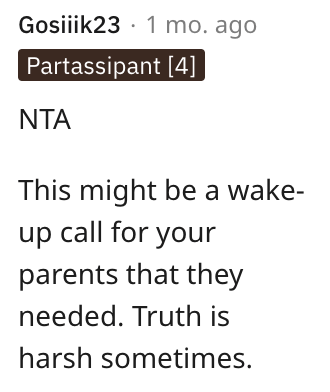 Another reader said that her parents do a great job of making everything about them. 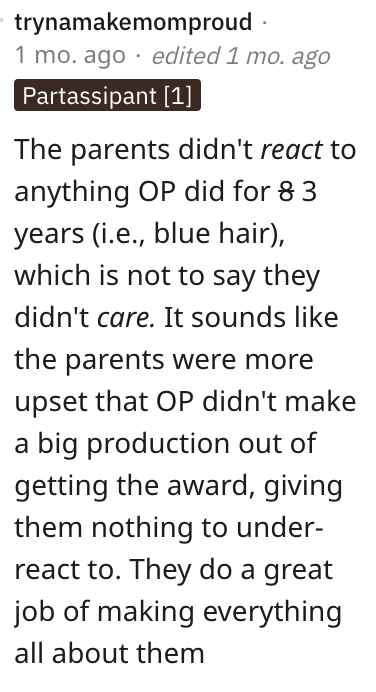 And another individual said it’s pretty clear that she knows what her parents think of her. 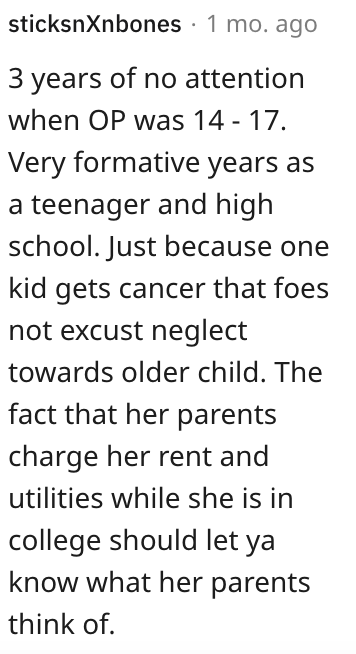