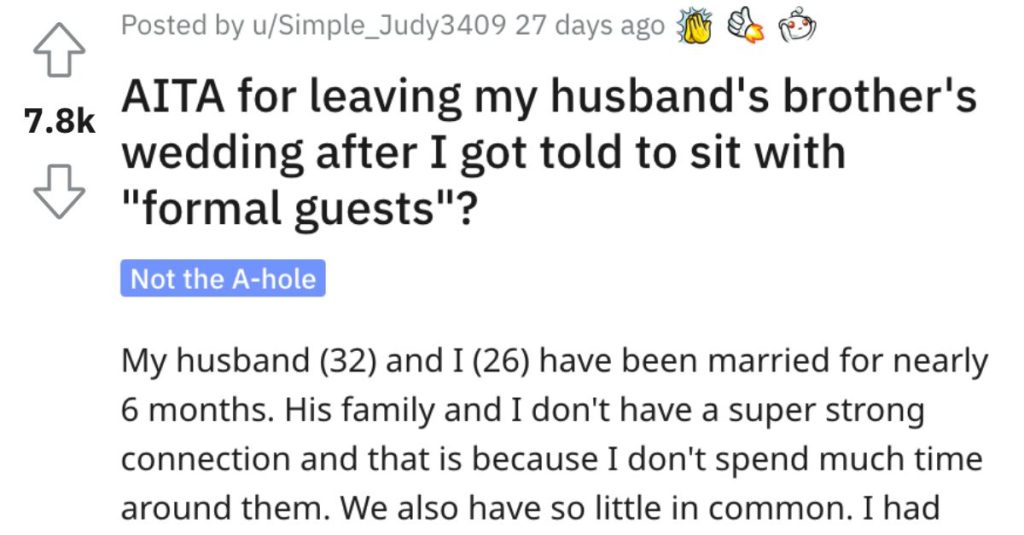 She Left a Wedding After She Was Told to Sit With the “Formal Guests.” Was She Wrong?

So I’ll guess we’ll have to read this woman’s post from Reddit’s “Am I the A**hole?” page to find out what’s goin’ on here!

Let’s get started now and get to the bottom of this!

AITA for leaving my husband’s brother’s wedding after I got told to sit with “formal guests”?

His family and I don’t have a super strong connection and that is because I don’t spend much time around them. We also have so little in common. I had attended only 2 of their events and both times I couldn’t sit with the family.

My BiL’s wedding was last week. It was the first inlaws wedding that I attend. not gonna lie I was nervous but hoped this would an opportunity for me to bond with them especially MIL.

My husband and I got there together. He then went around greeting guests and I waited for him til the ceremony began. After that we got invited to eat. I went to get my makeup fixed then came back and saw that both family tables were full. My husband was sitting with his mom, dad, sisters and the other table had relatives and they were all men.

I looked so confused I stood there and MIL motioned for me to go sit at a table where “formal guests” were seated. I was completely baffled at this. I politely told her that I’d like to sit with family and my husband but my husband said that there was no free spot for me.

I told him he could’ve saved me a chair but he said that just like me, he was just a guest amd there wasn’t much he could do. He urged me to go sit at that table but I refused and we started arguing. His mom told me that I was making unnecessary scene and complaining for no good reason. I had had it, I gathered my coat and turned to leave.

I could tell that a number of guests knew about it because of how loud the argument was. My husband followed me out and he kept telling me to quit acting immature and go back but I refused and said that I was going home.

I went home then he came back later to tell me about how he and the rest of the family felt about what I did, and how I embarrassed the family and made a scene at his brother’s wedding for no valid reason. I said I wasn’t going to sit by and be excluded like that but he said I got this wrong and that this was his brother’s wedding and we all were guests and I should, as a guest, respected that. We went on and on about this and then stopped talking altogether.

His mom and sister made comments about me being oversensitive and having attachment issues for refusing to sit away from my husband for 30 mins or so.

AITA for leaving the wedding?”

One person said she’s NTA and that they sent a clear message here. 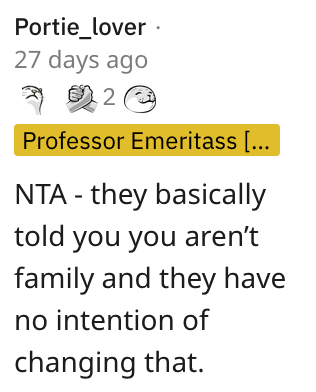 Another Reddit user said she deserves better than this.

And this individual said she’s NTA and that her husband is being disrespectful and gaslighting her.